Head of Texas transit system was previously at LA Metro 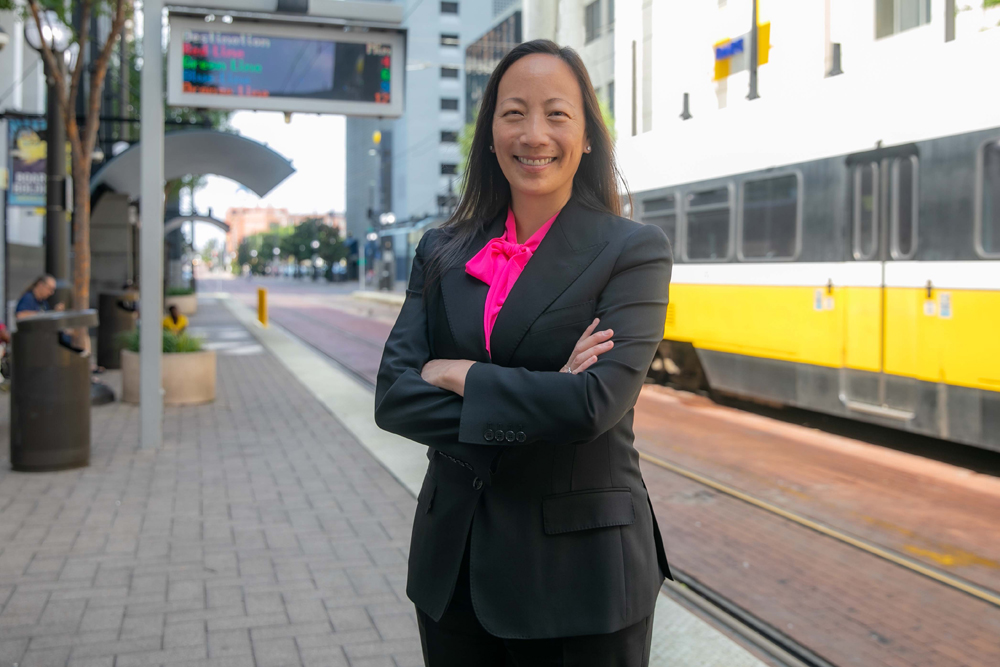 Nadine Lee took her seat as president and CEO of Dallas Area Rapid Transit on July 12, 2021. She brings 30 years of experience in transit, most recently as chief of staff at the Los Angeles County Metropolitan Transportation Authority (LA Metro). Prior to that, she was their deputy chief innovation officer, where she developed the agency’s “Vision 28” plan [see “LA Metro to prepare for 2028 Olympics with 11 rail projects,” Trains News Wire, Feb. 21, 2019]. She also served as project manager for Denver’s Regional Transportation District and holds a degree in civil engineering. This interview with Trains has been edited and condensed for clarity.

Q: What have your first couple of months at DART been like?

A: People have just been very kind, very welcoming. The Board [of Directors] has been tremendous in holding my hand at all of these different meet-and-greet meetings that we’re having with the 13 member cities, getting to know the mayors and city managers, just hearing out the issues that people have. So it’s been really exciting to think about just how forward-looking everyone is.

Q: The pandemic cut into farebox revenue for most transit systems. How are DART’s finances today?

A: DART is in a great financial position thanks to some of the relief funds that we received from the federal government. That has put us in a position where we could spend some money on the things that will make a difference to the customer.

Q: What do you see as your first priorities as CEO?

We want your journey to be free of delays, free of obstacles. We want our system to be welcoming to you. It should be safe. You should feel secure. You should have all the information that you need either at the station or on your device. If we can really improve customer journeys, then we will improve ridership.

Q: Dallas, like Los Angeles, is a car-centric city. How will you get people out of their cars and back onto DART?

A: The traditional hub-and-spoke system that we designed was for people who had the traditional 9 to 5 commute. Now what we’re seeing is that the travel demand curve has flattened in the peaks and it has actually come up a little bit in the midday and sometimes into the evening. We may not have the same level of travel demand for the longer trips from the suburbs to downtown, but that doesn’t mean we don’t need the rail system. It just means we need to supplement it with lots of great bus service.

Q: You are continuing to build rail, however. What’s the status of the Silver Line project and the D2 subway?

A: The Silver Line [see “Dallas Area Rapid Transit awards contracts to build Cotton Belt commuter line,” News Wire, Dec. 26, 2018] is a 26-mile corridor from DFW [airport] out to Shiloh Road in Plano. It’s a really important piece of our network. We originally had hoped to open in 2022 and now projecting 2024. It’s not a great story to say that we that we are delayed, but the reality is that our construction environment is just much more challenging. We’re just trying to plug away at all the little things. I’m confident that we’re going to see a lot of things getting done in the January timeframe.

On D2 subway [see “Digest: Dallas council approves light rail subway project,” News Wire, March 25, 2021], we’re getting closer to having some agreements on an alignment on the east end. We’ve been working with [Deep Ellum and the city of Dallas] to develop some alternative alignments that more suit their needs. We have submitted a package to the FTA with a request to enter engineering, which will restart our process for getting federal funding [and] also trying to get back into the core capacity program. And so, hopefully the FTA will accept out submittal.

Q: You were very much a part of LA Metro’s Office of Extraordinary Innovation [OEI]. What innovations would you like to bring to DART?

A: I just had a briefing on our Ideas Studio, which is very similar to some of the work that we did in OEI at Metro. It is asking people to pitch ideas to us to solve any number of our problems. There will be an evaluation process and we will respond back to the people who provide us with these ideas so that we can close the loop with them. We’re going to be very clear about wanting to prioritize ideas that solve the problems that we’re facing right this minute. We’re getting ready to launch that probably in the first quarter of next year.

Q: What makes you excited about this job?

A: We’re at a great point in time, a tipping point for DART, because we have spent a lot of time building out a lot of the infrastructure on the rail side. We have the longest light rail system in the country. There’s just a tremendous sense of optimism throughout the communities. It’s a new era for DART and part of what I’m here to do is to bring everybody together and try to achieve something great for our entire system.