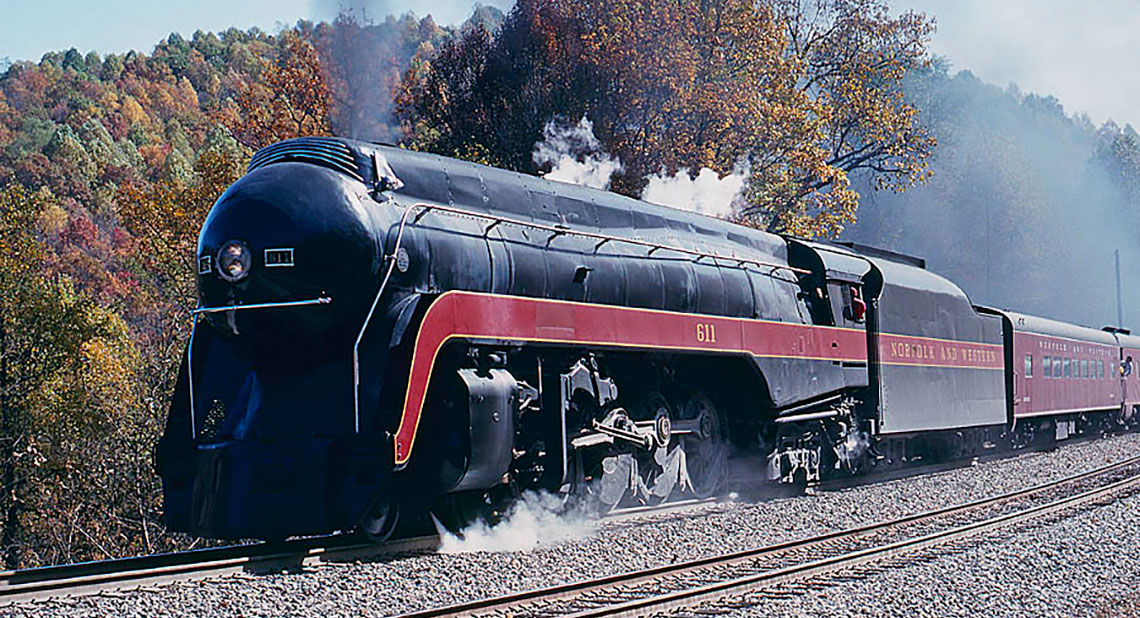 In 2015 the railroad enthusiast community welcomes one of the most beautiful and most powerful passenger steam locomotives ever built back to operating condition, Norfolk & Western Class J No. 611. This magnificent steam locomotive has returned to the rails after 21 years of inactivity. Trains would like to celebrate this achievement, and to do so we’ve gathered some of our favorite photos of yesterday and today, found videos that delight us, and written about the inspiration that we find in this streamlined mechanical masterpiece. We hope you’ll enjoy this look at 611 in Steam!

Craftsmen at Norfolk & Western’s Roanoke Shops built No. 611 in May 1950, finishing the job on May 29. The locomotive was one of 14 Class J 4-8-4s, Nos. 600-613, that were homemade and employed on the railroad’s crack passenger trains between Norfolk and Cincinnati and on other lines, such as the route to Bristol, Va. The Tuscan red, gold, and locomotives were powerful, developing more than 5,100 hp, and they could sprint at speeds up to 110 mph. Sadly, the coming of diesel locomotives in the late 1950s meant the end for N&W steam and the Class J locomotives. The railroad retired No. 611 in 1959 and donated it to a city park in 1963. In 1981, N&W management decided to restore No. 611 and it operated on excursions under the new Norfolk Southern Corp. banner from 1982-1994.

In 2013, the Virginia Museum of Transportation organized the Fire Up 611! Committee to restore No. 611, to build a permanent home for the locomotive at the museum, and to create an endowment for its perpetual maintenance. Thanks to generous donors, many of them Trains readers, and the Norfolk Southern Corp., the committee raised more than $3 million to begin the work. The locomotive was moved to Spencer, N.C., where work took place in the roundhouse at the North Carolina Transportation Museum. Returned to steam on March 31, the locomotive is set to pull excursions in Virginia in June and July. For more information about excursions, see www.FireUp611.org. 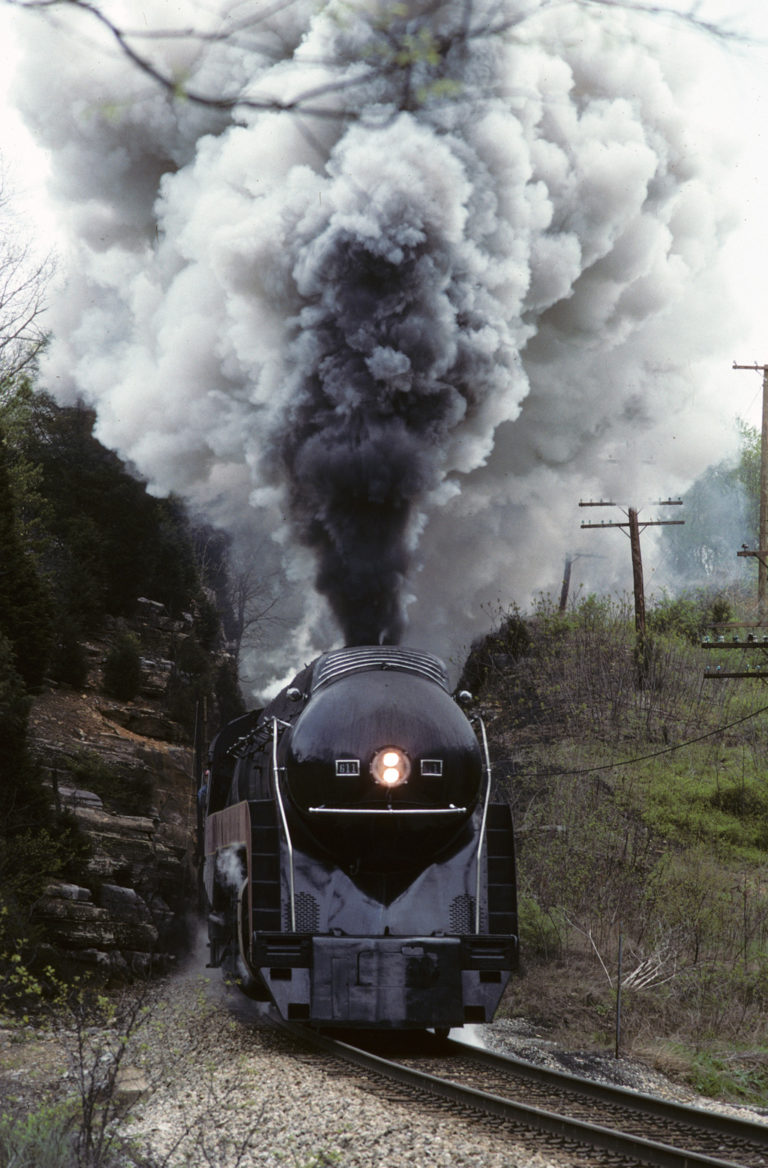 N&W No. 611 to perform again at Strasburg

STRASBURG, Pa. — Famed Norfolk & Western J-class 4-8-4 No. 611 will return to steam this fall in a series of limited-time-only events announced […] 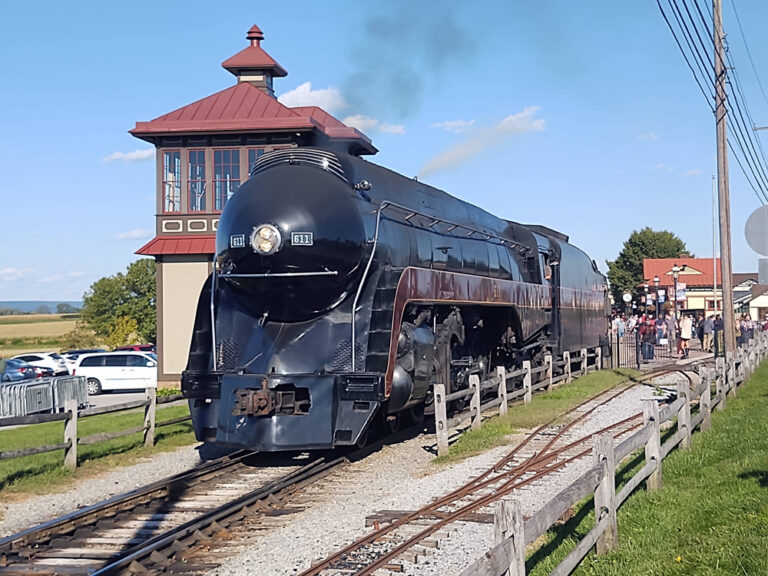 N&W No. 611 to remain at Strasburg Rail Road

STRASBURG, Pa. — Norfolk & Western Class J locomotive No. 611 will remain at the Strasburg Rail Road this winter, undergoing an annual inspection and […] 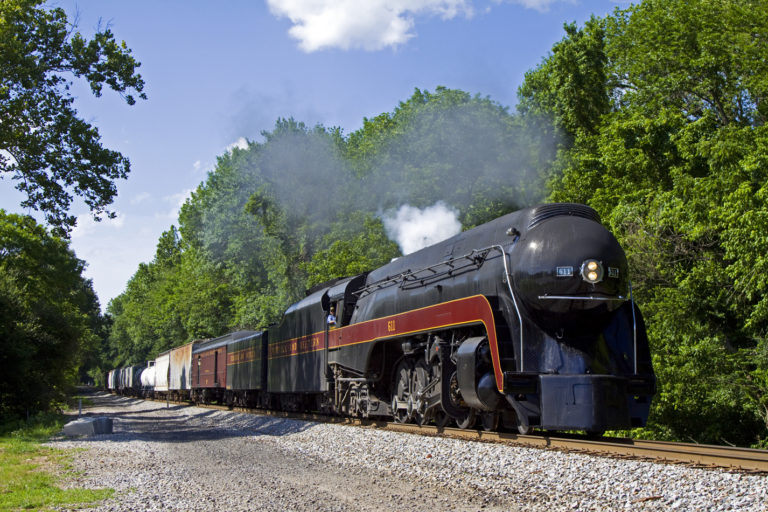 N&W 611 heads to Strasburg for lengthy stay Its stoker repaired, Norfolk & Western Class J steam locomotive No. 611 made the move from the […]

Photo Gallery: N&W 611, past and present

A look at this iconic passenger steam locomotive, from its 1950 birth to its present-day restoration

No. 611 puts on a show for fans during a photo runby at Yadkin Va., on an Oct. 18, 1959 excursion from Petersburg, Va., to Norfolk Va., for the Washington, D.C. Chapter of the National Railway Historical Society.
Ara Mesrobian photo, Trains collection

Dirty and dusty from disuse, No. 611 slumbers inside the Shaffers Crossing Roundhouse in Roanoke, Va., after the final run in October 1959 and before she was put on display at Wasena Park in 1963.
H. Reid photo, Trains collection

Class J No. 604 leads the eastbound Pocahontas through Pembroke, Va., on May 14, 1942.
Edward Grimes collection

No. 605 pierces one of the two bores at Montgomery Tunnel as it climbs the Christiansburg grade west of Roanoke with the Powhatan Arrow behind its couplers.
Philip R. Hastings photo, Trains collection

On a rainy day in Roanoke, Va., in July 1957, No. 602 waits to take train No. 45, the Tennessean, west to Bristol. The train is heavy with head-end business.
William E. Warden Jr. photo, Trains collection

On the return leg of an Alexandria, Va.-Lynchburg, Va., excursion, No. 611 rolls north on the former Southern Railway main line at Arrowhead, Va., on May 15, 1993.
Alex Mayes photo

No. 611 rides the 100-foot turntable at Spencer Shops on May 26, 2014. The engine’s wheelbase is slightly over 95 feet so it fit with inches to spare on either end of the table.
Jim Wrinn photo

Stripped to the bone, No. 611 is readied for inspection on June 21, 2014 as volunteers clean up the boiler exterior at Spencer, N.C.
Ben Earp photo

Here’s what No. 611 looks like with her jacketing, insulation, and skyline casting removed. This was only a few days into the restoration in June 2014.
Ben Earp photo

Volunteer Steve Morgan works on No. 611 parts inside the Bob Julian Roundhouse at the North Carolina Transportation Museum in Spencer on Jan. 19, 2015.
Ben Earp photo 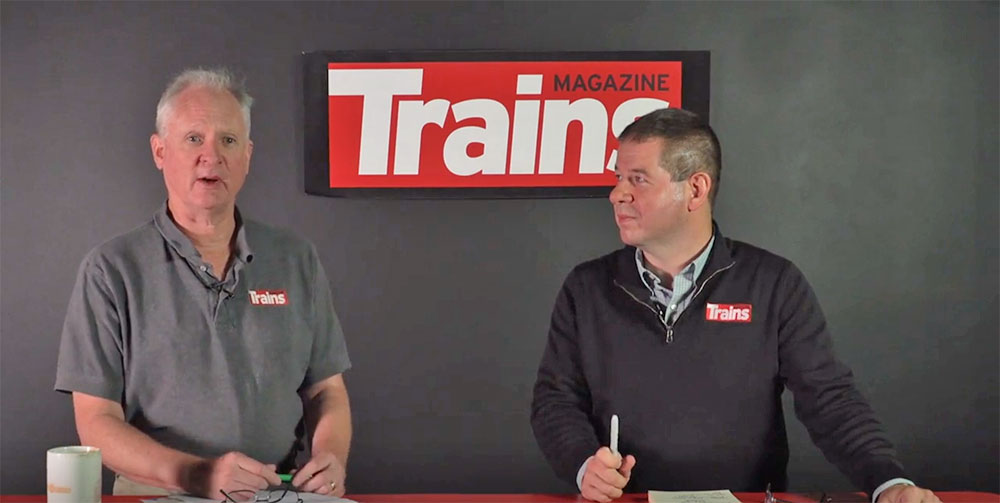 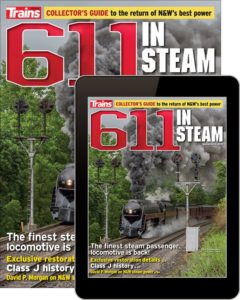 Don’t miss the return of 611 with this special issue! 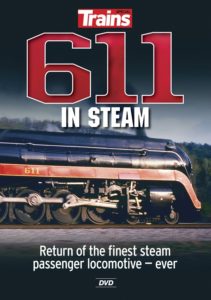 Explore the history and restoration of N&W Class J No. 611.