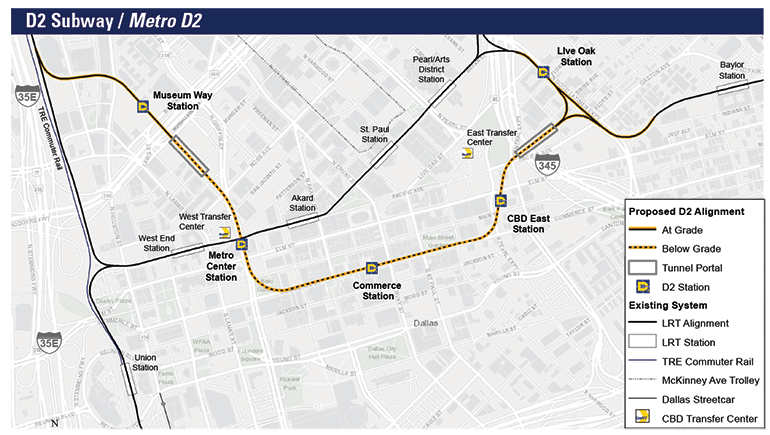 The Dallas City Council has approved building a new light rail route through downtown including a subway section with three underground stations. WFAA-TV reports the council also said it would support Dallas Area Rapid Transit’s effort to obtain an $800 million Federal Transit Administration grant to help fund the $1.7 billion project. The new segment, known as the “D2” project, would be served by both the Green and Orange light rail lines, could see the start of construction after 2022 and be operational in 2028. In all, the 2.4-mile line would include five new stations.

A city councilman in Del Mar, Calif., has called for an end to Coaster commuter train service, suggesting there is no need to save the rail line threatened by erosion of the Del Mar Bluffs. KGTV News reports councilman Dan Quirk said, “When I look at the ridership numbers I’m asking the question is the train even worth saving at this point? … Ridership numbers and freight numbers are incredibly low and we’ve got technology with Tesla and Uber with self-driving cars. It’s not here today but in 10, 15, 20 years, that’s the time frame we’re talking about for a potential tunnel, I think that technology is going to be pretty advanced,” There has been discussion of an inland tunnel to replace the current coastal rail route, but the most recent estimate places the cost of that proposal at $3 billion. The Coaster had annual ridership of 1.4 million prior to the pandemic; the route is also used by BNSF freight trains and Amtrak’s Pacific Surfliner, which carried more than 2.5 million passengers in 2019, with Los Angeles-San Diego as its most traveled city pair. Del Mar officials have been involved in a fight with the Coaster’s parent agency, the North County Transit District, over the district’s efforts to put a fence along the route to stop trespassers [see “Digest: STB delays action …,” Trains News Wire, Nov. 30, 2020].

Vermont Gov. Phil Scott says the state has had “preliminary discussions” with Amtrak about restoring passenger service in the state, but no date has been said. The Associated Press reports Scott made the comment Tuesday during his regular coronavirus briefing. The state’s two trains — the Vermonter, from Washington, D.C., to St. Albans, and the Ethan Allen Express, between New York City and Rutland, have been suspended since last year. Vermont Agency of Transportation spokeswoman Amy Taiko said talks to restart the services are in progress: “We hope to make an announcement within the next several weeks as to what a timeline will look like.”