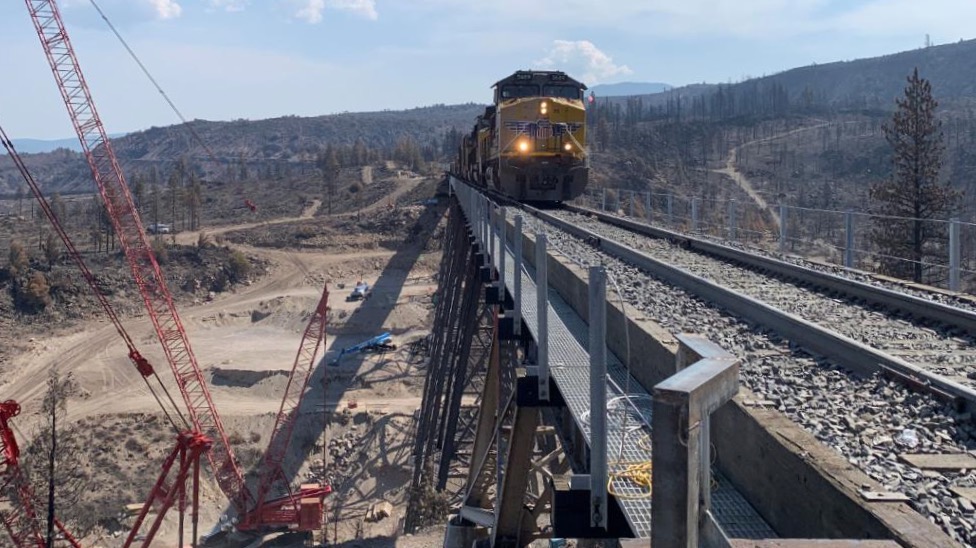 PHOENIX — Never underestimate the value of experience and institutional knowledge.

That’s one of the many lessons from Union Pacific’s Dry Canyon Bridge reconstruction project in 2022.

The project, which replaced a major fire-damaged trestle in Northern California in 2021 — about a month faster than was originally projected — has been much discussed and is justly held up as a matter of great pride by UP [see this article on the railroad website, and “Analysis: Union Pacific bridge repairs …,” Trains News Wire, Aug. 10, 2021].

But Shane Keller, the railroad’s senior vice president of engineering, provided some additional details on the work on Thursday during his presentation on UP’s capital plan for 2022 at the 43rd National Railroad Construction & Maintenance Association Conference — like the information recalled by one veteran employee that helped speed the project along.

“One of our more seasoned individuals said, ‘Back in the 80s, we took out this bridge in Nebraska,’” Keller said. “’And those spans are sitting in Cheyenne, Wyo., right now, in the weeds. And we were going to scrap those this year. Why don’t we have somebody take a look at those?’”

A review showed those spans were still structurally solid. “We had to modify a few things,” Keller said, “but we ended up taking the spans that we took down in 1980 and ended up reinforcing them and putting them up on this bridge. All the spans that are on top of the towers are actually from an old bridge we had a long time ago. We said it was going to take 60 days to get it open, and we did it in a little bit more than a month.”

The around-the-clock operations faced any number of challenges. The railroad built a road to reach the site, so it could bring in … It faced a shortage of hotel rooms because firefighters had much of the available space. “We wanted to keep people on site as much as we could,” he said. “We had food brought out to them. … This was fantastic work by everybody that was involved.”

Three weeks after the bridge was placed in service, the railroad’s chief inspector paid the facility a visit. “I said, I want you go out there and inspect the thing,” Keller said. “I want you to walk the entire span, underneath, the whole nine yards.

“He came back and said, ‘Hey, boss, that’s as good as any new structure we’ve ever put up. That thing’s going to be there for a long time.”

UP is coming off a year with a capital spend of about $2.9 billion, with $1.9 billion of that for renewal projects — rails, ties, bridge replacement, and the like. While the capital plans are not yet ready for release, Keller said the renewal portion of the budget will be “similar” to 2021.

“We’ve probably gotten to the point on our capital spend for infrastructure where we’re starting to hone things a little bit,” Keller said. “We probably feel comfortable with the spend that we’ve got in each category.