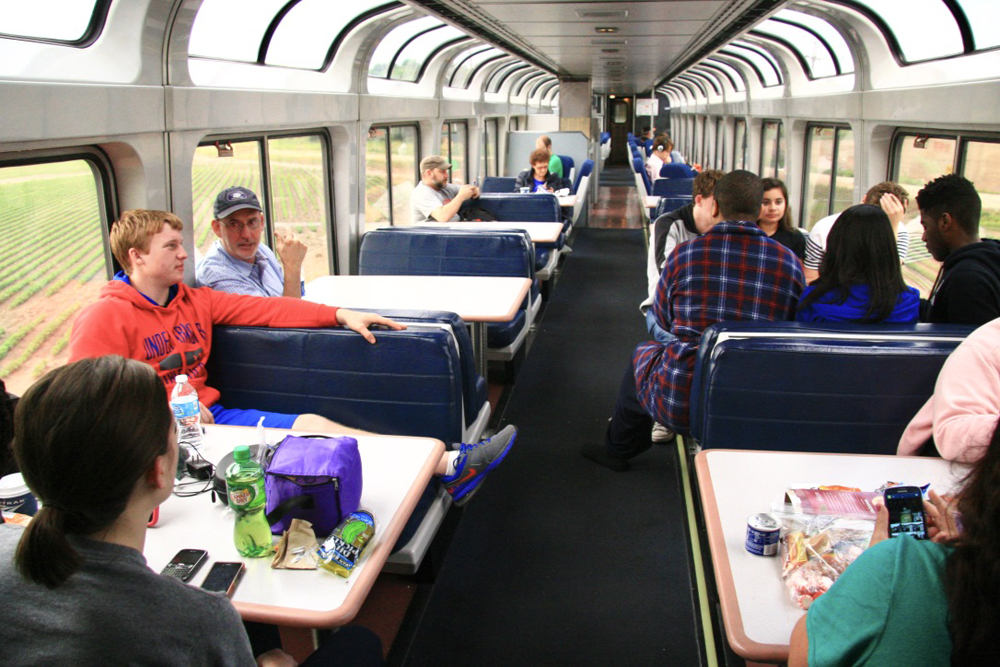 CHICAGO — More than 40 years after their debut, Amtrak’s bilevel Superliners remain essential to its long-distance operations in the western U.S., along with a handful of other routes.

This article offers a look at what passengers can expect when they ride in Superliner coaches, eat in superliner diners, or enjoy scenery from a comfortable spot in a Superliner lounge car. A companion article on Superliner sleeping cars is available here.

Accessible: Generally have 62 seats on the upper level and 12 on the lower level, plus space downstairs for a wheelchair. Most Superliner coaches have seat pitch (distance between seats) at about 50 inches, far superior to single-level Amtrak coaches and airline first class. In fact, standard Amtrak coaches utilized as the second Business Class car on Southern California’s Pacific Surfliners have more generous legroom than the Surfliner cars.

Coach-Baggage: No downstairs seating, just luggage racks and toilets. Many of these cars’ baggage compartments were once turned into lower-level smoking rooms, but all were converted back after smoking was banned entirely in the early 2000s.

Coach-Cafe: A small snack bar replaces lower level seating. One of these cars is regularly assigned to the Chicago-Grand Rapids, Mich., Pere Marquette (with some business class seating upstairs) and the Fort Worth-Oklahoma City Heartland Flyer. Others float throughout the system as needed with the downstairs cafe unattended.

Full diner: With kitchens occupying the lower level, these cars can theoretically accommodate 72 passengers upstairs, but are never staffed to handle large crowds at one seating, except on Auto Train’s first-class section. Orders taken by servers are dropped to the chef down a chute next to a dumbwaiter, which then lifts the food up when it is ready.

In summer 2020, when COVID-19 health protocols dictated more portable options for passengers who wanted to eat in their rooms, dining service on all Amtrak trains devolved to so-called “flexible” meals in a bowl that could be heated and easily transported to sleeping-car rooms. At the same time, coach passengers were denied entry into dining cars, which officially became “sleeper lounges.”

In late June 2021, the company began replacing the one-dish meals with traditional breakfasts, lunches, and dinners on the Superliner-equipped Empire Builder, California Zephyr, Southwest Chief, Sunset Limited, and Coast Starlight (but not the Texas Eagle, City of New Orleans, or Capitol Limited), though coach travelers still could not purchase meals in the diner. That is expected to eventually change [see “Amtrak plans to offer dining-car service to coach passengers, return traditional meals to eastern trains,” Trains News Wire, June 15, 2021].

Cross-country cafe: In a bid to cut staff and improve efficiency in response to a Congressional mandate to curb food service “losses,” Amtrak converted 17 full diners to cars that have table seating on either side of a center-car food preparation and cafe sales area. These cars currently run on the Texas Eagle, Capitol Limited, Auto Train’s coach section, and occasionally the City of New Orleans.

The highlight of every Superliner experience, the upstairs lounge serves as a welcome, glass-enclosed space for travelers to get away from their seat or room. Downstairs, a staffed snack bar serves cafe fare, snacks, and beverages. They were built with only scenery-facing seats on the upper level, but table seating was added to at least one side of every car during periodic overhauls during the last decade. Some Sightseer Lounges are all-table cars; these are mostly assigned to Auto Train’s coach section. The cars were built with an upstairs beverage bar to take some of the service demand off of the lower-level cafe, but this has only been staffed on rare occasions.

Sightseer Lounges were once featured on all Superliner-equipped trains, but as of mid-2021 have been at least temporarily been withdrawn from the Texas Eagle and Capitol Limited, making travel on those trains far less desirable.

How have Superliners soldiered on for so long? Credit the engineers and one-of-a-kind craftsmen at Amtrak’s Beech Grove Heavy Maintenance Facility just outside Indianapolis. Though current management has announced a new “refresh” initiative, the workers at Beech Grove have done their best to keep the fleet mechanically and cosmetically fit for decades. And for that, Amtrak passengers and other employees owe them a debt of gratitude.

4 thoughts on “Riding, eating, or lounging in an Amtrak Superliner”