Railcars derail all the time. The crew must right the cars and move on with their day 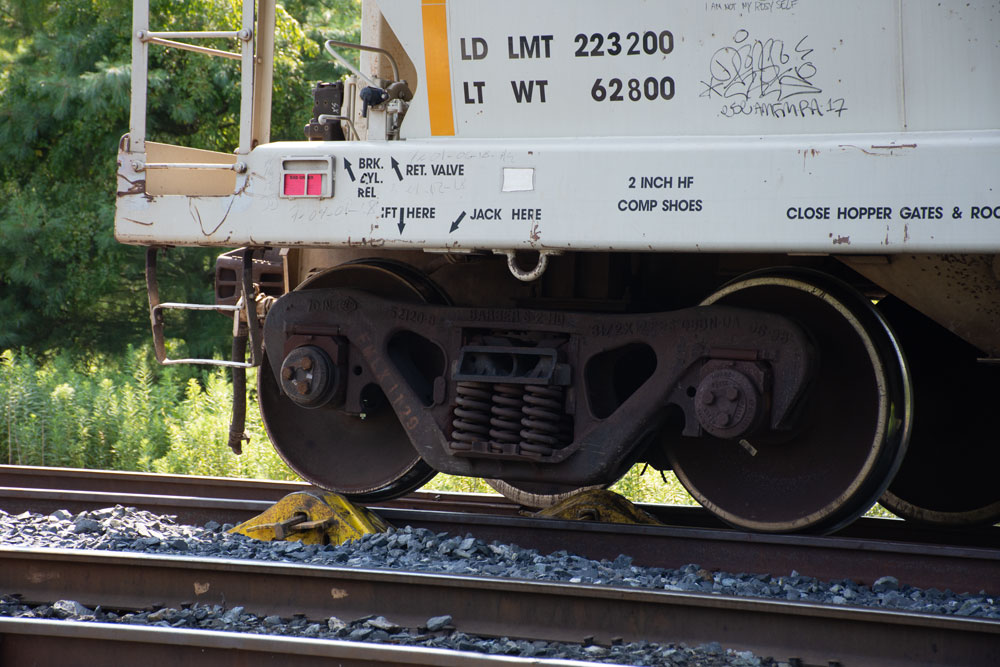 How to rerail a freight car: When things go bang that shouldn’t on the railroad, it usually means trouble and most likely a derailment. Derailments are a fact of life, and when one occurs on a main line of a Class I railroad, it usually results in many cars on the ground with extensive media coverage.

However, most occur in yards or during slow-moving switch moves, with one or two wheel sets leaving the track. It is these derailments that the railroad’s maintenance-of-way crews are usually tasked with fixing. I often wondered just how they go about getting a derailed car back on the track safely. On a warm August day, while photographing the Gettysburg & Northern Railroad, I found out how re-railing is done.

The Gettysburg & Northern trainmaster and MOW crew inspect the derailed car and track for any visual defects that caused the car to derail. Bill Anderson photograph

The covered hopper is stopped with the wheel against the outside ramp to check the alignment. Bill Anderson photograph

The car is stopped again with the wheel on top of the outside ramp to check the alignment of the wheel about to climb the inside ramp. Bill Anderson photograph

The covered hopper has been re-railed successfully. The track is now uncovered showing how the wheel ramps were positioned. Bill Anderson photograph

On the Green Mountain siding, G&N conductor Don Talbert was riding a slow-moving shove of empty covered hoppers and was preparing to flag the crossing when bang, the car he was riding derailed and suddenly he found himself standing on the ballast. The train stopped immediately.

The trainmaster and MOW workers responded to the site to determine what caused the wheel set on the car Talbert was riding to come off the track. They found no track or equipment defects. It appeared the wheel set “walked the rail,” or rode on top, for about 15 feet before derailing. They decided the best way to rerail the car was to use wheel ramps. The derailment occurred just short of a public crossing, and with permission from the crew, I had an opportunity to see this process.

The first order of business was to set the handbrake on the derailed car and pull the unaffected empties to another siding. A red flag was placed on the rail and the MOW crew placed wheel fasteners to hold the wheel set to the truck assembly while rerailing. The wheel ramps were placed on the derailed-wheel side of each rail with clamps and a wedge securing them tightly. The clamps are necessary to keep the ramps from moving when the full weight of the car is pulled against them.

When everything was in place, an engine was backed to the car by the trainmaster/engineer. In a slow move with impeccable precision, all that could be heard was the coupler closing and the pin dropping as the engine coupled to the car, resulting in no movement of the car. The next task was to ease the car up onto the wheel ramps slowly enough that the process could be stopped at a moment’s notice.

The car then was moved to a different siding, bad-ordered to have the wheel sets checked out, and the track was taken out of service until it, too, could be further inspected.