Today’s 15,333-mile network is steeped in history and variety. 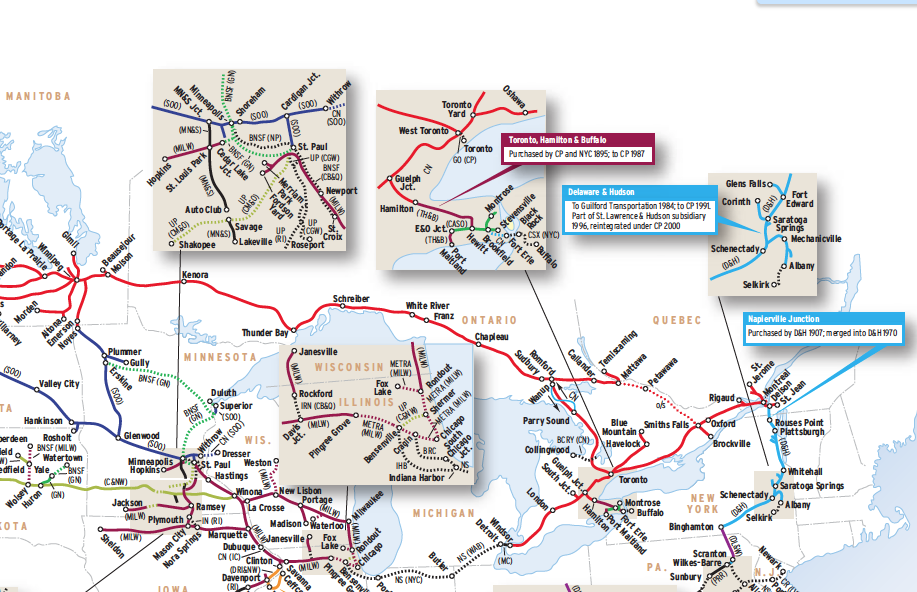 Some men go to war for their country. Others build railroads. In both ventures, there is sacrifice, struggle, and honor. The driving of the Canadian Pacific’s final spike at Craigellachie, B.C., in 1885 marked a defining moment in Canada’s transformation from a vast swath of land into a nation — a political and economic engine able to shape a way of life for those within its borders.

While CP’s builders launched a full-strength assault across prairies, tundra, and mountains, the company assembled a network of smaller lines to connect CP’s transcontinental railhead at Callander, Ont., with major seaports and cities in eastern Canada. By 1915, a system was in place that would remain through the late 20th century.

Canadian Pacific’s United States trackage has a more convoluted history, although its Soo Line subsidiary has functioned since the 1880s as a traffic source for manufactured products and later an outlet for raw materials from Canada. (Soo’s acquisition of the Milwaukee Road not only garnered it a superior Twin Cities-Chicago route, but also a 49 percent share in Chicago’s Indiana Harbor Belt.) On the heels of CP’s Delaware & Hudson purchase came a mid-1990s purge of 3,800 miles that included all lines east of Montreal. The company even moved its headquarters in 1996 from Montreal west to Calgary, closer to major traffic sources.

Today’s 15,533-mile network moves raw materials from the continent’s interior to major ports and population centers in the East and West. CP’s heaviest tonnage is found between Regina and Vancouver, where unit trains of coal, grain, sulfur, and containers roll east and west to markets at home and abroad.

This map originally appeared in the June 2010 issue of Trains magazine.