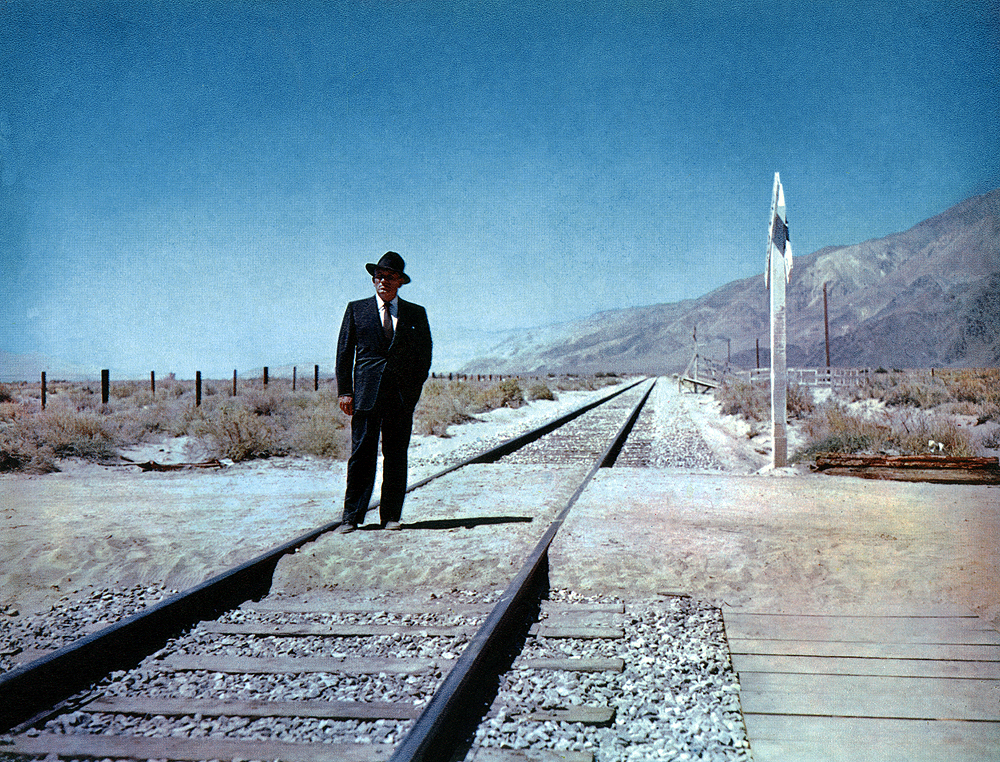 Bad Day at Black Rock filming location: “Bad Day at Black Rock” sounds like the perfect name for a western, but really, it’s a taut present day crime drama that explodes onto the screen when one-armed John McCreedy steps off the train just after the opening credits. And what a backdrop for the credits; a pair of spiffy Southern Pacific F’s pulling a string of red-and-orange Daylight-schemed passenger cars through the desert. These first scenes, with the train barreling through the desert at speed is reason enough to watch this movie. That it is also an excellent piece of film-making makes it all the more enjoyable.

The conductor says it is the first time he can remember the train stopping there and for good reason. Black Rock is a ramshackle nothing of a desert town filled with shady characters who all have something to hide.

And McCreedy, not wanting to divulge why he stepped foot in their little patch of grime, becomes the target of their venom. He’s looking for a man named Kamako, a Japanese American farmer, who he quickly finds out is no longer among the living. It’s a fantastic cast with Spencer Tracy, Anne Francis, Robert Ryan, Ernest Borgnine, Lee Marvin, and Walter Brennan. It’s worth watching even if there is no railroad connection in the plot. The movie winds up with another set of F’s pulling a spotless passenger train into Black Rock.

MGM movie location scouts chose the Mojave Desert just south of Lone Pine, Calif. on SP’s Jawbone Branch to build their little set, complete with a train order office! Other area locations include the low hills just west of Lone Pine. Look for Mojave on the map and follow the highway northeast. For the purists among us, things to look out for in this movie include freight units without steam boilers on a passenger train, no baggage car, and look closely, no people in the train! Except of course the closeup shot of McCreedy getting off. A truncated version of the Jawbone Branch still exists today to interchange with the Trona Railway but the area of the line where the movie was shot has been abandoned. And the little town was nothing but movie magic. It was torn down after shooting was completed. Additional footage was shot on the Sierra Railroad.

In my opinion, it’s not for impressionable kids but worth it for everyone who missed what a solid set of well-washed Daylight cars could look like. A pure train movie? Naw. But it is a good one to watch, and seeing the Southern Pacific of yesteryear is just great.

On a scale of one to five choo-choos, five being best, “Bad Day at Black Rock,” is a solid five.