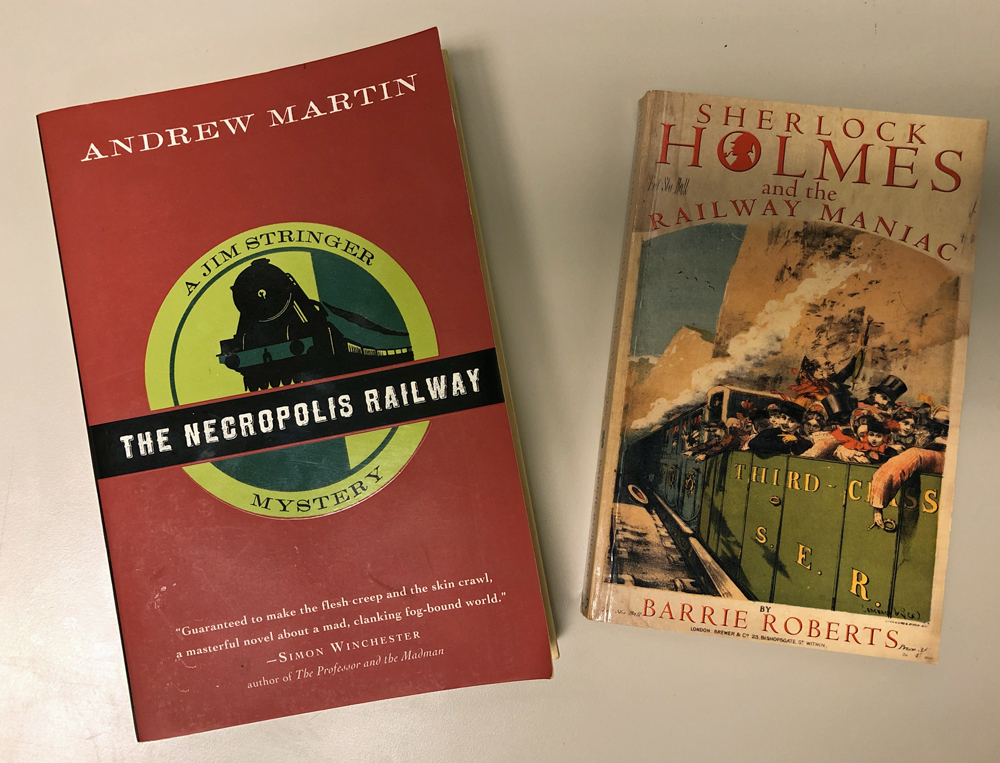 It’s November 14, 1903, and young Jim Springer is traveling to London to start a job on the London & South Western Railway. He’s put to work cleaning engines No. 29 and 31, which he soon learns are the two engines used to transport coffins to the nearby cemetery/mausoleum.

His predecessor had died in a mysterious way, and soon after Jim starts the job, another co-worker gets killed while on the job. After a third railroad person dies in a suspicious manner, Jim decides to get to the bottom of the killings.

This book assumes a certain level of railroad knowledge and terminology. If you’re reading this article, you’re likely the reader Andrew Martin had in mind. I had no problem understanding the book, and in fact admire the detail Martin put into creating the scenes. I could picture his descriptions, and appreciated his working in small details, such as Jim’s first clumsy attempts at shoveling coal into the firebox. (It wasn’t as easy as he’d expected!)

If you like early 1900s railroading and a down-and-gritty mystery, this book is for you. I enjoyed it.

Trigger warnings: There are references to prostitutes and there’s a brief sexual encounter in the book. There are also a few curse words.

Sherlock Holmes and the Railway Maniac

This book is one of 10 Holmes pastiches written by Roberts, and my first Sherlock Holmes novel. Holmes and Watson are called out of retirement to investigate two deadly train derailments. Soon after, Holmes and Watson ride along in a nighttime re-creation trip to canvas the landscape, and they soon find the engineer and fireman both unconscious and the train speeding out of control! They discover “resinous opiates” were put in the cab and as the engine heated up, the fumes overwhelmed the crewmembers (but not Holmes and Watson, as they both faced the outdoors while scanning the landscape).

This book’s events take place over a period of six years. The storyline also is tied into the events leading up to WWI. While I enjoyed the book overall, the concentration of railway action was primarily in the beginning and ending of the book (outside of travel trips). I also would have loved a chapter from the point of view of the railway maniac—how did he access the locomotive cab to sprinkle it with opiates, how did he choose which engine or train to derail—to learn more about his character.

Overall, thought, I enjoyed this book. The ending is particularly gruesome and bloody, so be aware if you’re squeamish.

Trigger warnings: The railway maniac dies in a violent manner at the end of the book.

Clive Cussler has published dozens of novels, including this 13-book series featuring Detective Isaac Bell. The Wrecker is book two in the series, but it’s not necessary to read any of the others to understand the book (I didn’t).

It’s 1907, and someone is out to ruin the Southern Pacific Railway. He’s been nicknamed “The Wrecker” by Isaac Bell. This criminal is derailing locomotives, starting fires, and attempting to dynamite the track, causing deaths and plenty of damage along the way. The storyline was strangely similar to the Sherlock Holmes book I described above, but in a much longer version.

There’s lots for railroad fans to love—nearly all of the story takes place on trains, near the railroad, or on railroad property. The first half of the book was exciting, as The Wrecker stayed just ahead of Bell. However, I wished the story would have been about 150 pages shorter, as the storyline gets longwinded and convoluted.

If you have time on your hands and enjoy historical fiction, check out this book. But if you must choose, I would recommend the Holmes Railway Maniac book instead of this one.

Trigger warnings: Racial slurs are used in some parts of the book.

2 thoughts on “More fiction books about railroading and locomotive topics”