Don’t miss these novels if you enjoy railroading topics 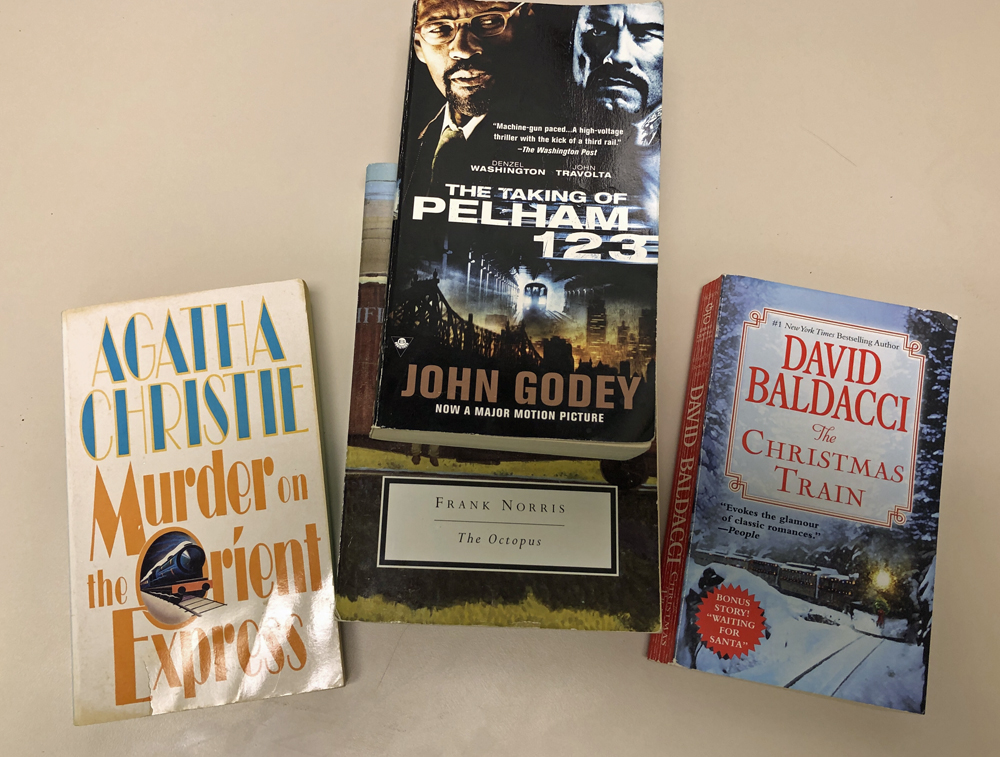 You might enjoy these four railroad themed novels on your summer travels. Rene Schweitzer details these four works of fiction that you may have overlooked.

Journalist Tom Langdon, due to an “incident” at an airport, is banned from flying commercial airlines and takes Amtrak from Washington D.C. to Los Angeles to visit his on-again/off-again girlfriend for Christmas. Along the way, he meets interesting people, including a famous movie director, a young couple about to be married, and a former girlfriend.

Tom takes Amtrak’s Capitol Limited from D.C. to Chicago and then rides the Southwest Chief from Chicago to L.A. I fact checked several railroad references in the text, and David Baldacci gets most of them right, with a few exceptions. For instance, he mentions that the Moffat Tunnel area (around 9,200 feet) has the highest track elevation in the country, when that honor goes to Pike’s Peak Cog Railway (14,110 feet). The stops on the route and references to city and state names match Amtrak’s online maps. (Interesting side note: The Hallmark Channel released this as a movie in 2004 and according to the reviews I read, the plot contained only one fictional Amtrak train that traveled coast to coast.)

Is the plot somewhat predictable? Yes. You might guess that he re-kindles his relationship with the former girlfriend. There are some harrowing situations but (no surprise), there’s a happy ending for all. If you’re looking for a “warm fuzzy” read with lots of railroading references and a bit of nostalgia, check out this book.

Murder on the Orient Express

Agatha Christie, the “Queen of Crime,” wrote 66 detective novels in her lifetime. Murder on the Orient Express is arguably one of the most famous of Christie’s novels. Detective Hercule Poirot is making his way home from Istanbul to England on the Orient Express. He’s approached by a wealthy American named Mr. Ratchett, who wants to hire Poirot to protect him from being murdered. Poirot declines the offer.

Sometime during the night, the train gets stuck in the snow. Mr. Ratchett is later found murdered in his compartment the next morning, having been stabbed 12 times in the chest. The murderer, due to the snow, is unable to leave the train and must be still onboard. Poirot must interview all the passengers in the car (it’s filled to capacity) to find the killer.

The entire book takes place on the train, either in the passenger cars/compartments or in the dining car. (One chapter moves a passenger to a compartment in another car.) Christie includes a map of the car, noting where each passenger’s room was. I found this useful as I followed the turn of events (though I already knew the outcome).

This was my first Christie read, and I enjoyed it … but I was also a bit disappointed. Her story is great, the text is still very readable, and the characters are varied and interesting. Perhaps it’s because I’ve watched the movie (the 1974 version) several times. The locomotive and train footage in the film is fantastic, and it didn’t feel quite the same way while reading the book. If you’ve read the book and seen the 1974 movie, I’d love your opinion on this.

Trigger warnings: This book was published in 1934, and there are stereotypes and derogatory comments about several nationalities.

Set in the San Joaquin area of California, The Octopus is a depiction of the tensions between the railroad (the fictional Pacific & South West), the ranchers, and the newly formed Ranchers’ League. The events are loosely based on the Mussel Slough Tragedy, a land dispute that occurred in 1880 between farmers and the Southern Pacific Railroad.

If you’re interested in railroading, there’s plenty to love here, from disputes about shipping freight and wheat, to a retired brakeman who hijacks a locomotive, and claims on land ownership that come to a head with a deadly shoot-out near the end of the book.

Ultimately, “The Octopus” (the railroad company) reigns, but there is a bit of revenge at the very end when a railroad mogul meets his death in a grain elevator.

If you’re looking for an action-packed historical novel, you’ll find it here. I found it nearly impossible to put down.

Trigger warnings: This book was published in 1901, and it contains racial terms that are inappropriate or offensive. There are comments about women that are no longer appropriate. It also contains a description of a jackrabbit hunt that may bother animal lovers.

Four men create a plan to hijack a New York City subway train (Pelham One Two Three), uncouple the first car from the rest of the train, and hold the passengers hostage for one million dollars cash. The hijackers give the Command Center one hour to deliver the cash or they will shoot hostages at a rate of one per minute.

The majority of the book takes place on the subway car, in the subway itself, or near the tracks. The protagonists, after receiving their cash, carry out their plan to override the motorman’s deadman feature, and plant grenades on the tracks nearby to prevent another unit to follow them. Unfortunately, their tactics doesn’t go quite as planned.

If you enjoy gritty thrillers, this book is for you. It kept me on the edge of my seat the entire time. The only critique is that, because there are so many characters, I sometimes had to pause to remember who was narrating a chapter.

If you enjoy books-turned-into-movies, check out the 1974 film adaptation too. (I’ve not seen the other two movie versions, but have read that they are inferior to the 1974 version.)

The Man From the Train: Discovering America’s Most Elusive Killer

In the early 1900s, a string of violent murders quietly happened across parts of the country. The killer would sneak into a rural house in the dead of night, kill the entire family inside with an ax, then disappear without a trace. The author and his daughter scoured thousands of scanned newspaper stories to piece this book together, and their research is admirable.

Every targeted house was within walking distance of railroad tracks. Their theory is that the murderer timed the killings to coincide with a passing train (usually in the early morning hours), and hitched a ride afterward. If that is true, the murderer traveled the rails to a number of states, and into Canada.

A minor criticism is that the chronology of the timeline is sometimes puzzling. The author jumps around a bit and doesn’t describe the murders in the exact order that they happen (in some cases because information about the crimes is limited). Despite this, I applaud Mr. James for bringing attention to a nearly forgotten serial killer.

Trigger warnings: This is a true crime book and describes horrific violence.