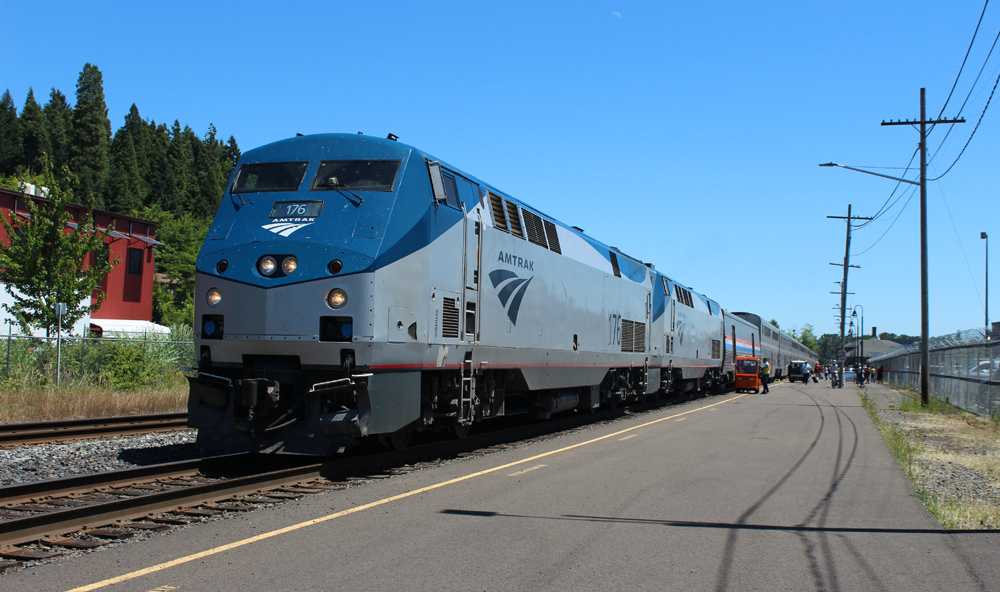 LOS ANGELES — Amtrak’s Coast Starlight began operating as Los Angeles-Sacramento, Calif., and Seattle-Klamath Falls, Ore., sections linked by an overnight bus ride as of Friday, July 16, but travelers haven’t been able to make new reservations, even on the unaffected parts of the route.

The Seattle-Klamath Falls portion had been dropped after a wildfire destroyed a Union Pacific bridge on June 28 [see “Canadian, Rocky Mountaineer, Coast Starlight disrupted by fires,” Trains News Wire, July 5, 2021]. The bridge isn’t expected to be repaired until Sept. 1.

Passengers had at least been able to reserve trips between stations on the California segment, which had been operating with coach and business class cars, sleepers, “traditional” dining service for sleeping-car passengers only, and a Sightseer lounge car. The Starlight’s restarted Pacific Northwest version also has identical equipment.

Yet during the past week, those attempting to book the train at Amtrak.com between any two city pairs are either greeted with a “sold-out” message (where there are other Amtrak train or bus alternatives), or are told, “we don’t have train service matching your request” (where the Starlight is the only option).

Keeping revenue off the books and passengers off the train is temporary, according to Amtrak spokeswoman Olivia Irvin. She says, “To ensure prioritization for customers who have had their reservation impacted by this change in service, sales on some segments of the Coast Starlight have been paused while the re-accommodation process is completed. This includes all itineraries on the overnight segment that will be served by a bus. We are not able to share a projected completion timeline at this time.”

However, from early last week through the weekend, Trains News Wire couldn’t book any segment. From July 31 through Aug. 3, trains will only run between Los Angeles and Sacramento because daytime trackwork will be taking place, but reservations can’t be made for that operation, either.

The passenger advisory on Amtrak’s website shows the different train and bus numbers that are being utilized, but doesn’t explain what is going on with the blocked sales. When booking is allowed again, a journey involving the overnight bus ride will be shown as a three-segment trip, but obviously some downward adjustments to sleeping car fares are in order.

For existing reservations, Irwin says, “Our contact center team is currently working with each impacted customer to modify their reservation to their liking.” The system apparently isn’t ready to show what new prices passengers will be charged, though this would not impact anyone except those people riding between Sacramento and Klamath Falls.

On the bridged segment, Amtrak is utilizing four buses, “with the flexibility to add or subtract as needed,” according to Irwin. California intermediate stops at Chico, Redding, and Dunsmuir will continue to be served during the track outage, along with a planned en-route rest stop where retail vendors will offer food.