NYC RS-3 and U25B diesels, 4 passenger cars will be scrapped 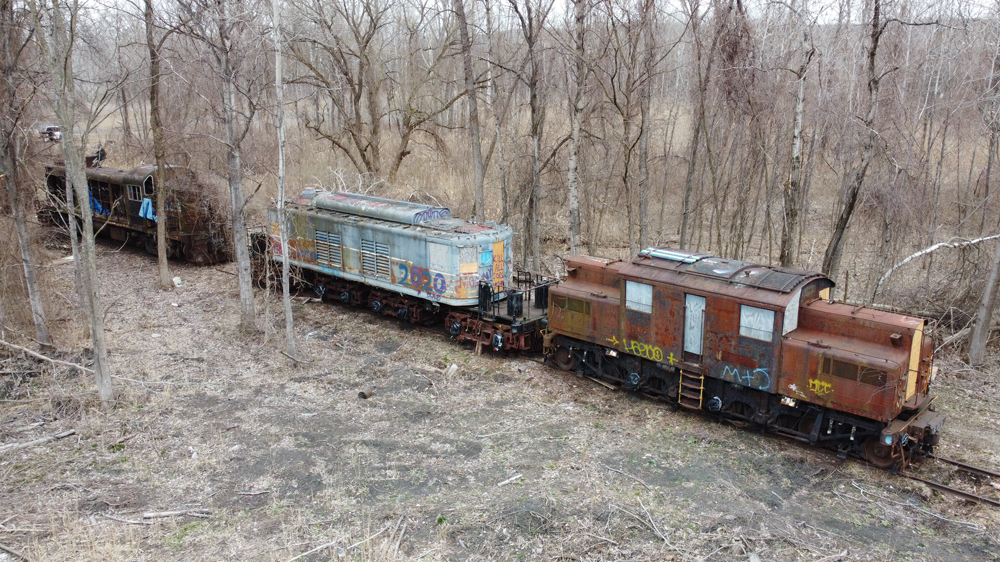 GLENMONT, N.Y. — Red tape, a gas pipeline utility, and a lawsuit have combined to delay and further threaten the rescue of two historic New York Central electric locomotives stranded for three decades along the Hudson River south of Albany.

The Danbury Railway Museum of Danbury, Conn., has been working for nearly a year to remove the units from a power-plant site where they are standing in the way of plans to build a factory to manufacture offshore wind-turbine towers [see “Museum works to save two rare New York Central electric locomotives,” Trains News Wire, March 18, 2022]. That $350 million project has faced delays because of a lawsuit by nearby homeowners.

According to project director Stan Madyda, the museum this week will investigate the feasibility and cost of placing panel track to clear the area for a roadway. Otherwise, the remaining option is to hire four sidewinder lifting devices at a cost at $150,000 to $225,000 to move the engines just 200 yards to a temporary staging area, before they can be trucked 120 miles to Danbury.

“We’re running out of time,” Madyda said. “Every time we think we have a solution on our end, we get blockaded by something else. The power plant agreed to allow access through the property with a truck, pending an engineering study. [It] came back that there is a high-pressure [natural] gas line buried 30 feet under the property that is not owned by the power plant, but there’s an objection to anything going over the gas line with plating. Our trucking firm said it should be fine, but [the gas line owner] wanted a [costly temporary] bridge.

“It’s the perfect storm of things working against us.”

Once restored but now heavily vandalized, the locomotives —  NYC Class S-1 (2-D-2 configuration) unit No. 100, built in 1904, and Class T-3a (B-B+B-B configuration) unit No. 278, built in 1926 — weigh 113 tons and 146 tons respectively. Dumping of fly ash aggravated the swampy-soil conditions on the area formerly called Beacon Island, which is no longer a separate landmass. The railroad bridge that once provided access has washed out, leaving the engines stranded and making trucking the only alternative for removal.

“We’re going to keep trying until the very end,” Madyda said. “We’re up against the deadline right now.”

The site was reopened last week after an eight-month delay caused by a homeowners’ lawsuit filed in March. It stopped all work to investigate the public-health implications of disturbing the 2 million tons of toxic fly ash dumped by the generating station of PSEG Power New York LLC (formerly Niagara Mohawk). Built as a coal-burning utility, the plant later converted to natural gas.

The museum, Madyda said, got a “letter of exception” from the town, which allows the group to bring in tracked vehicles. During the legal-action pause, only rubber-tired vehicles were permitted.

“There’s a staging area on the property where we can put the locomotives for 60 days or whatever,” he said, “then they can be loaded by crane onto our trucking-company trailers and brought out that way. There’s a new access road with a 6% grade, but our trucking company says it should be OK.”

If the sidewinder option is the only solution, he added, the company owning them said the move would likely damage the locomotives and the firm will require a liability waiver.

These NYC units are among the last of their kind. Both were built by a consortium of American Locomotive Co. of Schenectady, N.Y., and General Electric Co. No. 100, built as No. 6000, served as the prototype of a 47-unit fleet that made possible NYC’s 600-volt DC third-rail electrification program, including the opening of the 1913 Grand Central Terminal complex. No. 278 is one of 36 locomotives, and the only survivor, in a second generation of units on NYC electrified commuter and freight lines around New York City.

Diesels to be scrapped

Madyda said scrapping is set to begin next week on two diesel units, NYC Alco RS-3 No. 8254, later Amtrak 126, and NYC General Electric U25B No. 2510, along with four passenger cars also on site. Formel Auto Salvage of Great Barrington, Mass., he said, agreed to dismantle the six pieces in exchange for retaining the scrap metal, meaning no cost to the museum. “It was the only option that made it work for them,” Madyda said.

Construction of the wind-turbine factory is being undertaken by the Port of Albany, with a U.S.-Canadian-Danish consortium, Marmen-Welcon LLC; a Belgian steel construction company, Smulders; and a Norwegian energy company, Equinor ASA. The wind turbines will be placed off Long Island.

In a statement released by Museum President Jose Alves and Madyda, the group further explained its plight: “Where the historic locos currently sit is where the new access road from River Road [State Route 144] onto Beacon Island is set to end. The consulting firm needs this area cleared of all rolling stock and rail infrastructure, so the new access road can be built and preparation to the ground started for construction of one of the buildings. Of the 80 acres of land that will be developed, our locomotives are right in the spot where the earliest stages of construction need to occur.

“At this time the cost of this project has ballooned to a point where existing donations simply can’t cover it, especially if the consulting firm will also be charging us unknown storage fees. Funding this project through use of the museum surplus puts the future of our organization in great financial uncertainty. Our board’s No. 1 responsibility is to keep our museum financially viable, and after we and many other organizations hemorrhaged money during the pandemic, this task has not been easy.

“While we didn’t create the situation where the locomotives ended up where they are now, a small group of strong-willed volunteers, and a lot of money and resources has already been expended trying to undo mistakes of the past. We want to see these locomotives saved, if not by us, then so be it. Donations are still being accepted on our website.”

For more on the topic, see this December 2021 Spotlight News article by John McIntyre.