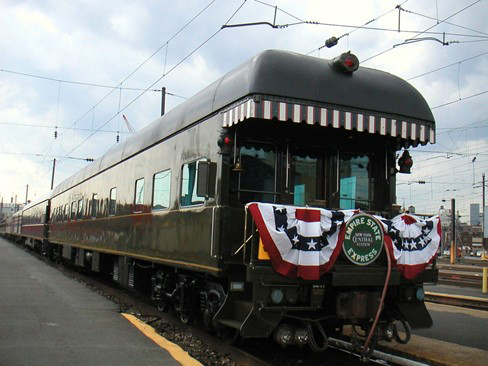 CHICAGO — Tours of three privately owned railcars built by the Pullman Co. or Pullman-Standard will be offered on Saturday, Sept. 4, and Sunday, Sept. 5, at Metra’s 111th Street/Pullman station as part of the gand opening weekend of the Pullman National Monument. Amtrak P42 locomotive No. 161, which wears the Phase I paint scheme as part of Amtrak’s 50th anniversary celebration, will bring the cars to the site and also be on display.

Tours will be held from 10 a.m. to 4 p.m. each day. Tickets will be required, and will be available with a suggested donation the day of the event at the grand opening weekend’s Information Tent, to be located at the southeast corner of 111th Street and Cottage Grove Avenue. The tent will open at 9 a.m. each day. Tours will depart every 15 minutes and are projected to last 35 to 40 minutes. Face coverings will be required, and the cars are not ADA accessible.

The private car tours are part of a larger weekend to celebrate the grand opening of the Pullman National Monument at the former Pullman Co. factory and its accompanying planned community [see “Pullman National Monument to celebrate grand opening …,” Trains News Wire, July 30, 2021]. The National Park Service has released a short video previewing the event; a full schedule of events is available at this page on the Park Service website.

Cars scheduled to be included in the tour are:

— New York Central No. 3; built by Pullman in 1928 as a business car for NYC director Harold Sterling Vanderbilt and remodeled in 1992 to closely resemble its 1930s appearance while adding modern technology.

— Promontory Point, built as a business car for the Union Pacific by Pullman in 1953 and sold to private owners in 1997, when it received its current name. It includes two master bedrooms, a formal dining room with chandelier, a lounge, secretary’s room, full kitchen, and open=air rear platform. President Jimmy Carter used the car for a whistle-stop campaign in 1976.

— Northern Dreams, built in 1955 for the Northern Pacific as the North Platte, when it had five double bedrooms and a buffet. It was rebuilt to an 11-bedroom configuration by Union Pacific in 1956, sold to Amtrak in 1971, and modified for use on Auto Train until its retirement in 1997. It was sold to its current owners in 1999, receiving its current name. Refurbished in 2013, it currently includes six double bedrooms and a lounge, along with surround sound, a kitchen for full meal service, and WiFi.

More information on the private-car tours is available here.