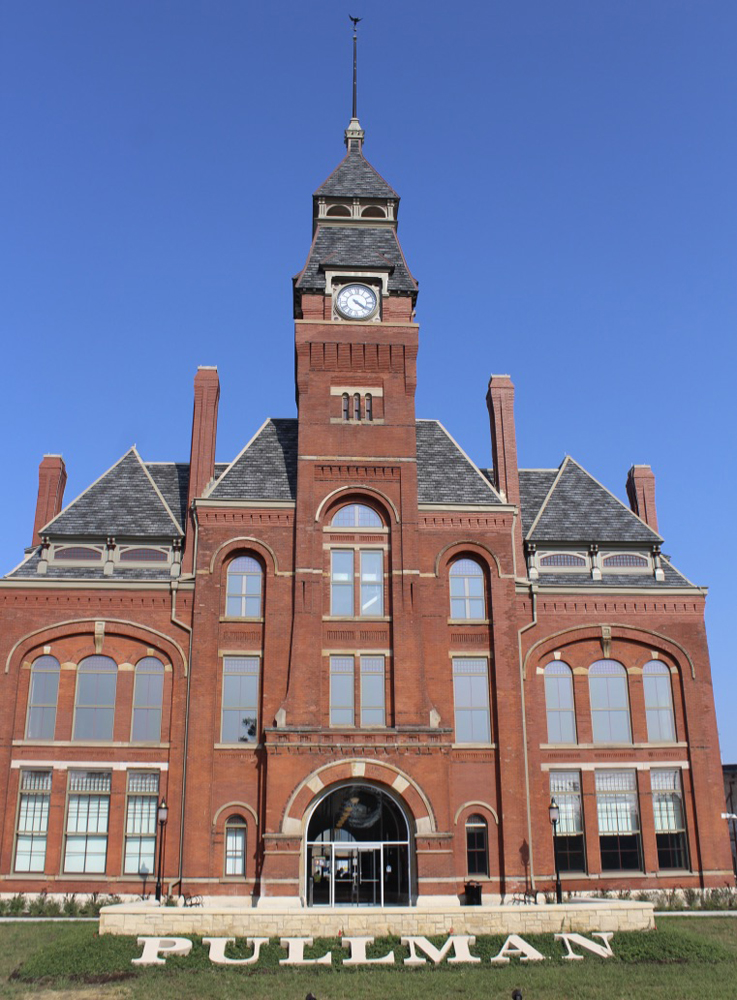 CHICAGO — Mirroring a song from the hit musical “Hamilton,” the formal opening of the Pullman National Monument Visitors Center on Chicago’s South Side will give participants a sense of “the room where it happened.”

The “room,” in this case, is the long-shuttered Clock Tower Administration Building and grounds that were the birthplace of assembly-line passenger car manufacturing and the company town in the 1880s.

“We were fortunate that the state acquired the site and was able to save the building’s outer shell after a 1998 fire,” Szabo says. Fundraising for the Center began in earnest by the National Park Foundation after President Obama designated it as a National Monument in 2015. “That recognition helped fund the Visitors Center and a full-time park superintendent to provide the momentum to move forward to where we are today,” he adds.

But the former Federal Railroad Administrator notes this weekend’s opening is only the first step in establishing a series of detailed exhibits telling the stories that the Pullman National Monument represents: an innovation in railroad carbuilding, community life in a company town, and the Pullman porters’ and organized labor’s fight for fair compensation and reasonable working conditions.

Szabo’s organization is the official Friends group, authorized to raise funds on behalf of the park. It is one of several partners, which also includes the Bielenberg Foundation and National A. Phillip Randolph Pullman Porter Museum, that help tell the many stories of Pullman. “‘America’s stories live here’ is our motto, and that describes the evolution of our nation, and that continues in the living Pullman community today,” says Szabo.

Though the upper floors of the Clock Tower building still require additional work, “the first floor is fully renovated with restrooms and air conditioning,” says Gage. She points out some stone and original timbers in the central carriageway, below the tower, where this weekend’s visitors will pass on the way to the initial exhibits.

Displays include a man painting the outside of a car, a replica of the low-backed berths found in Pullman’s earliest wooden sleeping cars (including the key porters used to lock the upper berth in place), a touchable model of the town’s layout, and an example of one of the earliest flush toilets  —a significant innovation in the 1880s. Pullman demanded quality, so to attract skilled craftsmen he built a town of solid brick buildings — most still standing and lived in 140 years later — featuring amenities that were in short supply elsewhere when construction began in 1881.

The exhibits don’t shy away from portraying pioneer George M. Pullman’s controversial paternalism, which led to a strike when he cut wages but not the rent. “We talk about the man,

the company, and the town: what was his vision?” says Gage. “We try to provide facts and let people make their own decisions.”

Also inside, there are tactile small-scale models for the visually impaired of Pullman’s city and displays explaining what work and life was like. One of them shows how painters averaged 286 hours per month. “This helps you understand why unions were organized — the workers needed bargaining power,” Gage says.

Assistant Superintendent Sue Bennett says, “A video shows how the Pullman strike in 1894 led to the first nationwide boycott by American Railway Union employees shutting down trains pulling Pullman cars in 27 states.” The government ended the strike, but organized labor had made its point. An exhibit also illustrates how A. Phillip Randolph spearheaded the formation of the Brotherhood of Sleeping Car Porters.

With the factory grounds now open, visitors also have a chance to see how transfer table tracks were placed to move cars between work stations in the Front Erecting Shops adjacent to the clock tower and the Rear Erecting Shops, a building whose significant fire damage and need for extensive rehabilitation is still evident.

Pullman Foundation’s Szabo hopes the shops on both sides of the transfer table tracks will someday house examples of the way manufacturing was done in the era and some vintage Pullman-built railcars. “We’ve already had some sizable corporate donations, and we’re hoping there will be more to help make that happen,” he says.