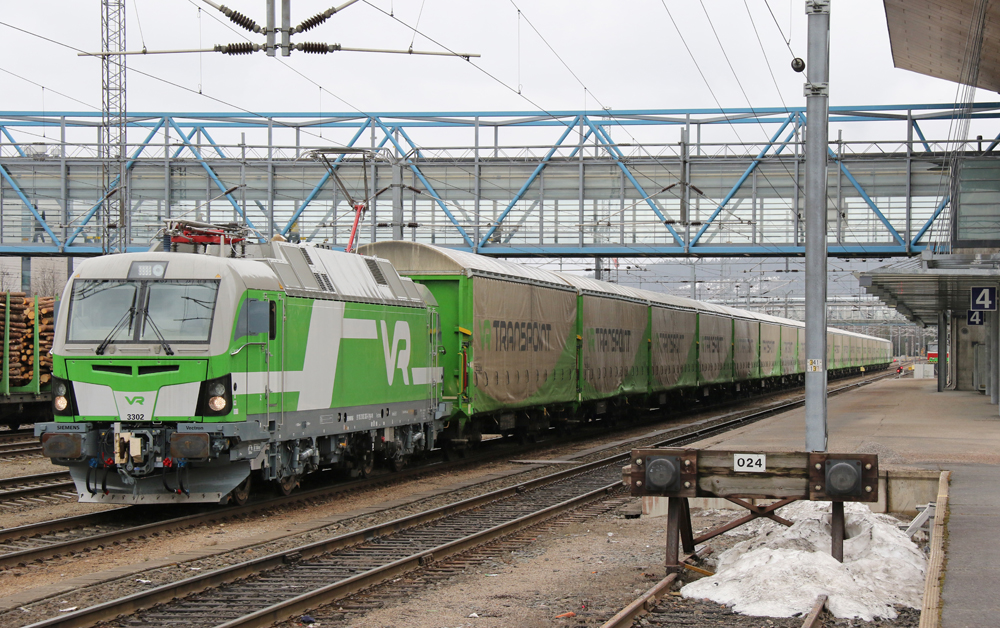 Politicians in Finland have spoken out against a European Union (EU) proposal that would see Finland’s 5-foot gauge (1524mm) rail network at least partly rebuilt to standard gauge, or most likely dual 5foot/standard gauge, although some politicians and business organizations support the idea.

Finland’s use of 5-foot gauge reflects its history as part of the Russian Empire a century ago, before it gained independence after World War I. The ‘5 foot’ gauge in the former Soviet Union was actually changed by Soviet Railways from the 1960s onward, and now is 1520mm. This is 5/32nd of an inch less than 5 foot, but that small difference didn’t prevent through trains from Finland into Russia.

In late July, the European Commission proposed major changes to the trunk “Trans-European Network.” These are EU-wide routes crucial for freight and passenger traffic across the bloc, and therefore qualify for European funding even in the “richer” member states, such as Finland or Germany. A key proposal in the plan is that all routes qualifying for funding must accommodate standard gauge. Only Ireland is exempted from this requirement as it is an island with no rail connection to another EU member, now that the United Kingdom has left the bloc. (And railways in the British province of Northern Ireland use the same 5-foot, 3-inch gauge as the rest of Ireland, anyway).

The changes to the Trans-European Network priority routes follow Russia’s invasion of Ukraine, and reflect the likely long-term reduction in trade between Europe and both Russia and Belarus. The changes also prioritize modernization of Ukraine and neighboring Moldova’s railway networks with European funding. West-to-east routes to Lviv, Kyiv and Mariupol (the latter currently under Russian occupation), plus north-to-south routes to Odesa via both Lviv and Chişinău in Moldova are now part of the priority network, and would accommodate standard gauge tracks, although little construction is likely until the war has ended.

Cross-border links between EU states and Belarus and Russia are being removed from the previous “core” priority network, and planned upgrades are being pushed back by two decades to 2050. Until the war in Ukraine began in February, transit traffic from China to the EU, especially via the Polish/Belarus border, was one of the fastest growing parts of the European rail freight market. The EU has said it could re-prioritize connections to Belarus in the event a democratic government gains power there in the future.

The Finnish government initially rejected the EU proposal, with Transportation Secretary Timo Harakka calling it “unacceptable and unreasonable” in early August. Subsequently, other politicians and the Finnish business community have spoken up in support of the proposal. The national chamber of commerce has said, “Finland’s logistical location as a hub of East and West is turning into an end point on the northern edge of Europe. As far as Finland is concerned, the security-political situation requires a stronger connection to the south and west to also enable military mobility,” and adds, “From a financing point of view, the proposal would bring with it greater opportunities to utilize EU funding in Finland in the short and medium term.”

Those supporting the plan have also highlighted that conversion is planned only for key routes where it makes economic sense. The government’s initial negative reaction may be at least in part a negotiating strategy to gain more EU funding, as the government can legitimately argue the gauge change wasn’t in its original plans.

There is already a short standard gauge line in the north of Finland which crosses the border into neighboring Sweden, but for standard gauge freight to travel from the rest of Europe via this route would add around a thousand miles to the journey, with substantial energy costs as well. Most people in Finland and Sweden live in the southern parts of the countries, not the north, parts of which are above the Arctic Circle.

However, if standard-gauge cars could operate in Finland, it would be possible to use train ferries to bring them across the Baltic Sea from Sweden or Poland; similar rail freight ferries already operate between those countries. Longer term, a rail tunnel under the Baltic Sea from Finnish Capital Helsinki to Tallinn in Estonia, around 50 miles away, has been proposed. This would be standard gauge and will connect with the new Tallinn-Poland Rail Baltica line under construction [see “European rail line caught up in geopolitics …,” Trains News Wire, Aug. 2, 2022]. However, the tunnel is not currently agreed to or funded.

There is currently no standard-gauge equipment in Finland, so new locomotives and cars would be needed; there is, however, a large leasing market for such equipment in Europe, so finding suitable equipment would not be particularly difficult. Finnish rail operators currently use locomotives built in several European countries as well as the former Soviet Union.

Before Russia’ invasion of Ukraine there was considerable rail freight on routes from Russia to Finland. Timber from Russian forests being moved to Finnish wood and paper processing plants was a key source of traffic, along with oil from Russia and intermodal freight in both directions. None of this traffic now goes by rail as Finland closed its rail lines across the border, and most of it has stopped altogether. While trucks from Russia and Belarus have been banned in the EU, Russia hasn’t banned EU trucks from crossing its border, so some road freight continues.