About 7.8 miles of track closed since 1956 is being renewed 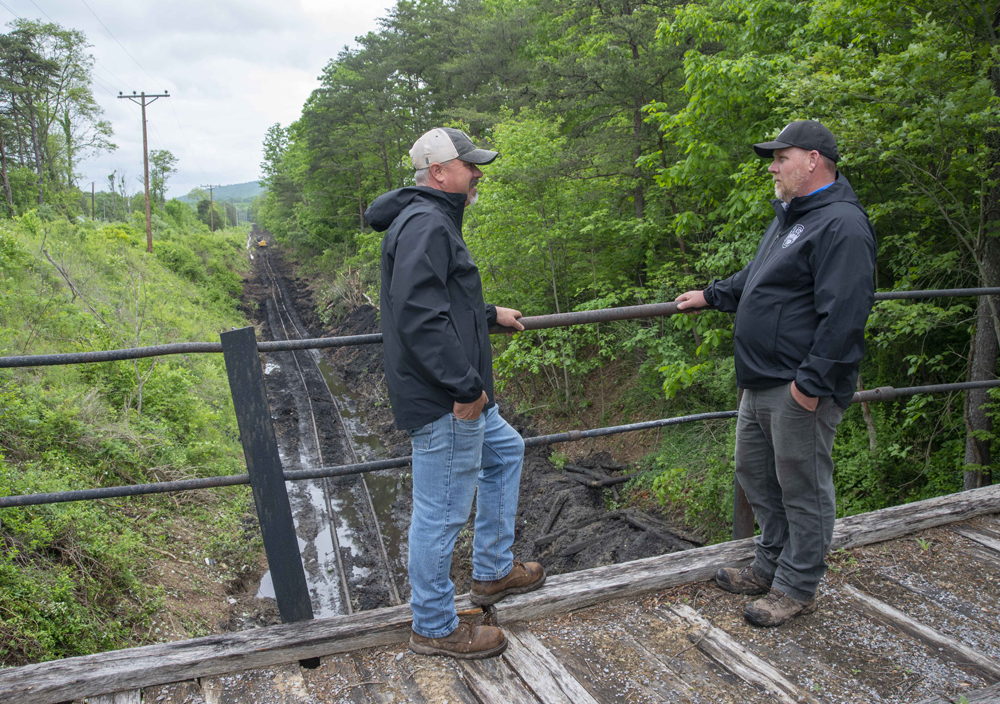 Together, they are hacking away at brush, clearing dumped garbage, felling trees, repairing or replacing culverts, and draining standing pools of water that have soaked the roadbed since the last regular train left here in 1956.

All of this will lead up to installing fresh ties, re-spiking much of the existing 85-pound rail — a large percentage is in good condition — ditching the right of way, and ballasting, tamping, and surfacing the track structure.

The first goal is to reopen the 7.8-mile stretch between EBT’s headquarters at Rockhill Furnace, Pa., and Saltillo, a former junction with EBT’s Narco Branch that once boasted a station, water tank, and wye. In its 2022 fund drive, the 1,688-member Friends group has raised more than $200,000, double its goal. Much of that sum is earmarked for engineering work to rebuild the station, which was razed when it deteriorated beyond the point of repair, and the water tank, which burned in an arson fire.

Long-range, EBT plans to reopen another 12 miles to the end of the line at Robertsdale and Woodvale, company towns in the mountainous mining area that once supplied the semi-bituminous loads for coal trains. This is rugged territory, with the line climbing 2.75% grades and traversing a horseshoe curve and two tunnels in need of significant work [see “Drone whirs through East Broad Top tunnels,” Trains News Wire, May 27, 2022].

“Clear and dry” is the goal, according to EBT Foundation General Manager Brad Esposito. Clearing means opening up a 60-foot-wide (at minimum) right-of-way by cutting thick brush and trees that have grown up near and in the gauge since this part of the EBT was idled.

Formed in 2020 to buy the railroad, the non-profit foundation, along with volunteer crews from the Friends, has funneled all trackwork energy into rebuilding and reopening the tourist-era 4½-mile line north of Rockhill Furnace, which ends at the Colgate Grove picnic area and wye near Shirleysburg, Pa. Scheduled seasonal passenger service over that segment resumed in 2021.

With that task done, EBTF and the Friends are turning their attention to the more scenic southernmost part of the line that penetrates the former deep-mine region.

From north to south, the work includes:

— South of Rockhill Furnace (near Jordan Summit) to Southern Huntingdon County High School at Pogue, 3 miles: Staff and Friends volunteers are clearing brush and restoring ditches and culverts. In some cases, original stone box culverts are sound, while elsewhere, less-substantial culverts are being replaced with durable plastic corrugated pipe. “Our goal is to get to Pogue siding” this season, Esposito said, meaning with track not yet necessarily capable of handling trains, but with stone ballast laid and rail spiked to fresh ties to make it passable for light equipment such as speeders.

— The 268-foot-long steel trestle at Pogue, largest bridge on EBT, built in 1904: Bids will be solicited soon for a contractor to strengthen two piers in Aughwick Creek and add ice protection to their upstream faces. This will include repointing stone masonry, and installing new pier caps and new bearing plates. The steel girders are in good shape, as are the north and south abutments.

— Pogue to Three Springs, 3 miles, will require clearing of heavy brush and some big trees. Several weeks ago, EBTF and Friends volunteers rehabilitated a 700-foot stretch of main line for free handcar and speeder rides, which were offered last Saturday as part of the annual Three Springs Carnival. As noted in the FEBT Newsletter for May, this is an ideal way for EBT to reintroduce itself to on-line communities.

— Three Springs to Saltillo, 2 miles, contractor work by G&H Anderson Excavating. Esposito said that firm bought land adjacent to the EBT right-of-way for timber and had begun logging operations. The railroad had previously worked with Anderson, and hired the company to extend its scope to clear the right-of-way as well.

It’s important to hire a firm experienced in working around railroad infrastructure, said James Roslund, EBT’s director of engineering, because a careless operator can leave behind ripped-up embankments and broken rails. “The more you tear up the roadbed, the more you have to repair holes and gaps,” he said.

Earlier, Anderson helped EBT clear land at Robertsdale, yielding some 10,000 board feet of lumber that the railroad will use, among other purposes, to restore part of the flooring in its car shop, which is now composed of dirt, sawdust, and coal dust.

A National Historic Landmark, EBT once hauled trainloads of coal over its 33-mile line from Broad Top Mountain mines to a washing-and-grading plant and connection with the Pennsylvania Railroad at Mount Union, Pa. The line was partially revived in 1960 for seasonal steam tourist trains. It closed again in 2011 and lay unused until 2020, when the non-profit EBTF was formed to purchase 27 miles of main line, six Baldwin 2-8-2 steam locomotives, a fleet of passenger and freight cars, a historic machine shop complex, and a roundhouse and turntable.

Later this year, EBT will mark the 150th anniversary of the start of its construction in 1872. Opened in 1874, the line became one of scores of narrow gauge railroads across the United States, most of which died off in the teens, ’20s and ’30s. When EBT closed in 1956, it was the last one in the East still functioning as a common carrier.

For more on the railroad, the EBT Foundation, and the volunteer Friends of the East Broad Top, see www.eastbroadtop.com and www.febt.org.