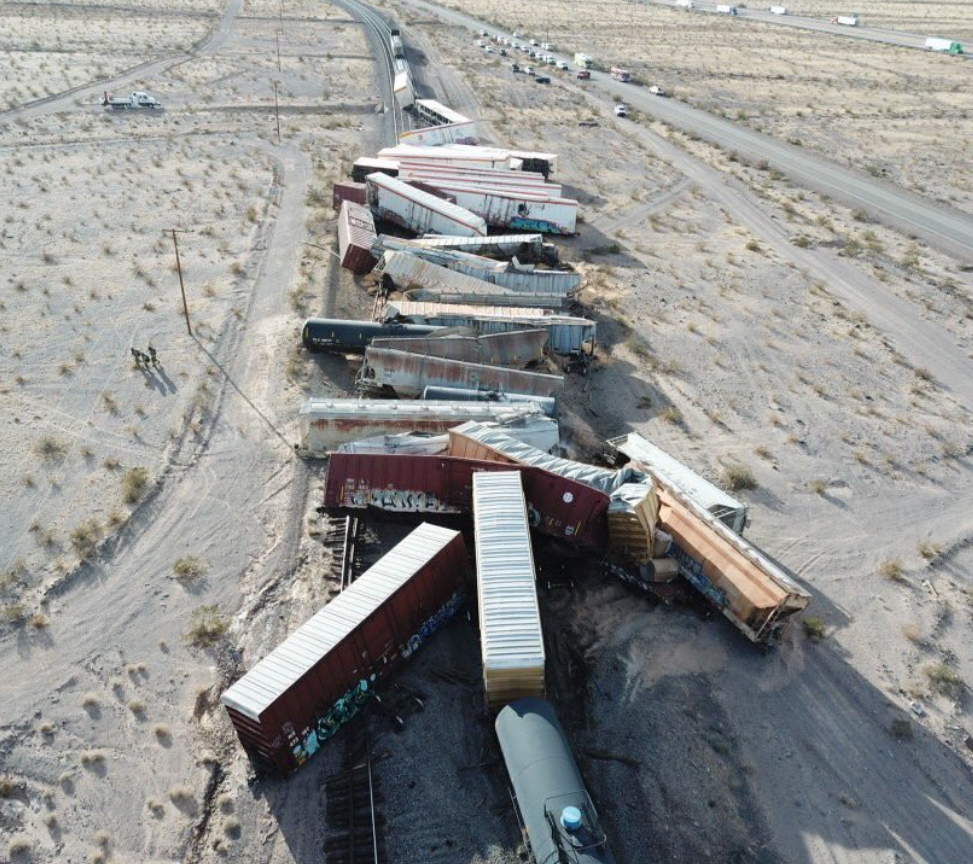 Some 25 to 35 cars of a BNSF train derailed Wednesday near the remote San Bernardino County, Calif., community of Ludlow, spilling “several thousand gallons” of denatured alcohol from a leaking tank car, according to a county fire department spokesman. The Victor Valley Daily Press reports the fire department was called to the scene about 1 p.m. and that a county hazmat team was able to halt the leak by entering and patching the tank. No injuries were reported. In a Wednesday customer advisory, BNSF said a time had not yet been determined for reopening tracks at the accident site, about 60 miles east of Barstow, Calif., on the Needles Subdivision.

A federal court hearing a lawsuit over the 2013 Lac-Mégantic disaster is being asked to decide whether the case should be decided under bankruptcy rules, which favor defendant Canadian Pacific, or federal rules which favor the families of the victims. Courthouse News Service reports the case being argued in Boston before the U.S. First Circuit involves the plantiffs’ failure to name the correct U.S. subsidiary of CP, which was sued negligently shipping the oil after the Montreal, Maine & Atlantic, whose train derailed and caused the fire that killed 47 people, declared bankruptcy. Three MM&A railroads were found not guilty of criminal charges brought as a result of the disaster [see “Burkhardt: Lac-Mégantic jurors made right decision,” Trains News Wire, Jan. 19, 2018]

The National Transportation Safety Board said it is sending three investigators to the scene of a BNSF Railway employee fatality on Wednesday. The Orange County Fire Authority said in a Twitter post that it was called to the scene of an accident shortly after midnight on Wednesday, and the victim had been crushed between two converging trains. The accident occurred in La Mirada, on the Los Angeles side of on the Orange County/Los Angeles County border, with investigation being handled by the Los Angeles County Sheriff’s Department. KTLA-TV reports that BNSF, in a statement, confirmed the death and said “the entire BNSF family is terribly saddened by this event and we extend our deepest sympathy and thoughts to the family and loved ones of the employee involved.”