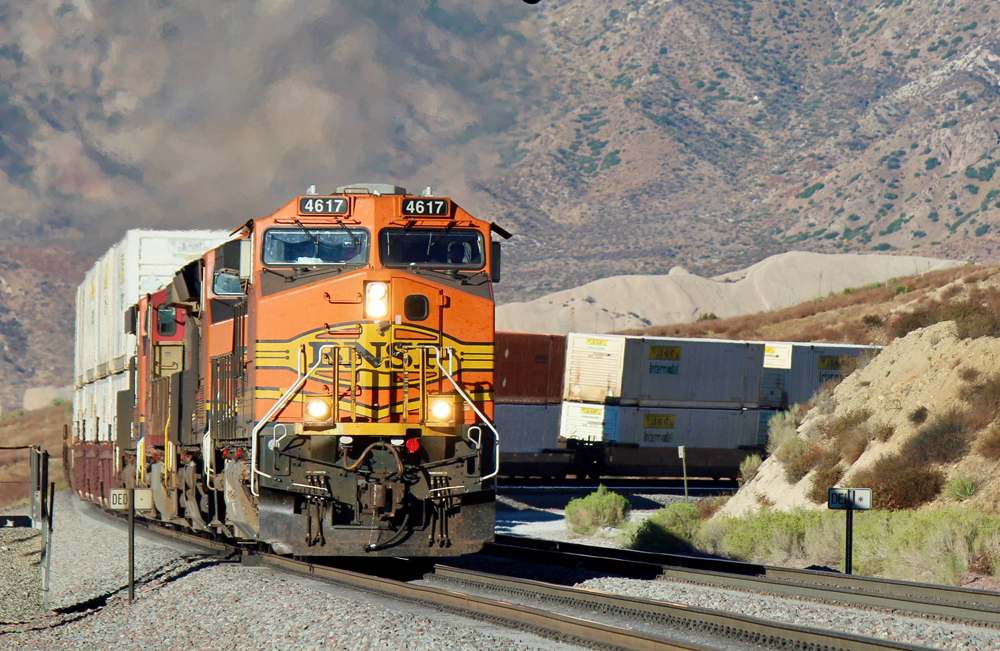 FORT WORTH, Texas — BNSF Railway’s decision to meter a broad range of carload traffic bound for California beginning next week is aimed at preventing congestion from worsening on the busy Southern Transcon during the Fourth of July holiday period when many crews mark off.

The west end of the Southern Transcon, which carries 80 trains per day, is gummed up due to crew and locomotive shortages in California as well as the ripple effect of congestion at BNSF’s Chicago-area intermodal terminals.

“We face significant resource imbalances — meaning an imbalance between our westbound and eastbound volume levels that leaves our crews and locomotives imbalanced — on our Southern Transcon in general and particularly on our Needles Subdivision, which runs between Barstow, Calif., and Needles, Calif.,” BNSF explained in the amended service recovery plan posted to the Surface Transportation Board’s website on Friday. “These imbalances, which are driven in large part by congestion at our Chicagoland intermodal facilities on the eastern end of our Southern Transcon, are impacting the fluidity of the western end of our Southern Transcon.”

Intermodal customers have been slow to pick up their containers at Chicago terminals, particularly Logistics Park Chicago, or LPC, amid high volume and a shortage of chassis, truck drivers, and warehouse capacity. It’s a problem railroads have faced since intermodal traffic rebounded in the second half of 2020.

“This has led to a significant number of Eastbound trains heading for LPC being staged in sidings across the Southern Transcon waiting to arrive at and be unloaded at LPC. This phenomenon has, in turn, reduced the velocity of intermodal flatcars due to their inability to be unloaded and the subsequent slowing of their return to the West Coast to handle the continued strong demand for imported cargo. It has also limited our ability to handle other traffic on the Southern Transcon as sidings, mainline segments, and terminals are congested with staged freight,” BNSF says.

As of this week, 28 trains bound for Chicago terminals were staged across the Southern Transcon. Over the next two weeks, BNSF will begin limiting the number of intermodal trains originating in California that are destined to Logistics Park Chicago.

BNSF’s classification yard at Barstow is plugged, and the number of trains requiring re-crews is running triple normal levels across California, Arizona, and New Mexico.

It has increased the train, yard, and engine crew headcount on the Needles Sub by 12% since January through a combination of hiring and temporary transfers of crews from other parts of the system. More than half of the transfers are now qualified for active service on the Needles Sub. BNSF has stepped up hiring, is offering conductors hiring bonuses of up to $15,000, and is offering to buy back crews’ accumulated vacation time.

BNSF also has adjusted trip plans to road freights to reduce the number of work events or so that they can bypass the Needles Subdivision.

The embargo on westbound carload traffic that BNSF announced on Thursday is designed to meter volume on the Needles Subdivision “in in light of recent service interruptions and ensure that our service in Southern California does not degrade over the Fourth of July holiday when our crew availability has traditionally been substantially decreased,” BNSF told the board.

BNSF expects crew vacations to peak during the week of July 4, and slowly decline over the rest of the summer.

“During the first week of implementation, permits will be used to ensure sufficient westbound shipments destined for California of animal feed as well as critical energy, public water and military supply; we continue to monitor the pipeline for flows of those public welfare commodities, including the current high level of carloads already in the pipeline that will not be impacted by the embargo,” BNSF says.

After the first week of the embargo, BNSF expects to implement exemptions to the embargo for the so-called “public welfare commodities” and similar freight.

“Like the Board, BNSF is aware of the impact that our service issues can have on commodities that are more essential to the public welfare, and our approach to this embargo reflects that sensitivity,” the railroad told the STB. “This embargo is scheduled to be in place until July 31, 2022, but we will be monitoring developments on an ongoing basis in case it becomes necessary to extend it or possible to terminate it early.”

Customers affected by the embargo can request permits for shipments a week in advance.

BNSF has told the board that its service recovery would be choppy and uneven across the system, something the Southern Transcon congestion is proving.

“We are pleased that there are parts of our network — most notably our Northern region between Chicago and the Pacific Northwest — where our recovery efforts have created improved levels of fluidity in the form of increased velocity and decreased dwell. Velocity on our Northern region increased 5.9% in May versus April, and we have seen a 7.4% reduction in dwell in that region since January. As a result of this improvement in the Northern region, we had both our best loading and velocity days of 2022 during the month of June. These overall improvements have directly correlated to an improved service experience for our customers,” BNSF wrote.