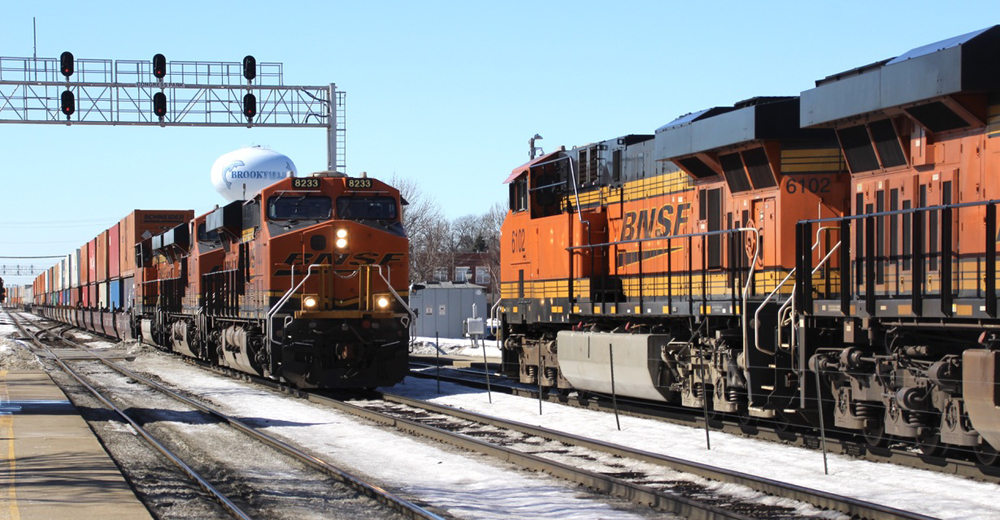 WASHINGTON — A report released today (Thursday, Sept. 8) by the railroads’ trade group, the Association of American Railroads, says a nationwide interruption of rail service could cost more than $2 billion per day.

The AAR says the report is based on historical Federal Railroad Administration data — specifically updating a 1992 study to quantify the impact of a national rail shutdown on employment and economic output in today’s dollars. It also outlines what it says the impact would be on manufacturers, distributors, retailers and consumers.

The AAR report comes as railroads and unions continue to move closer to a possible strike or lockout. A 30-day cooling-off period for negotiation — triggered by the release of recommendations from a Presidential Emergency Board — ends at 12:01 a.m. EDT on Sept. 16.

In other developments regarding the ongoing negotiations, the trade group for the fertilizer industry has asked Congress to intervene in the event of a strike, while one union reported to its members that BNSF Railway “was hampering progress between the parties“ on Wednesday, during the first of three days of negotiations scheduled at the National Mediation Board in Washington. Negotiations were also held Thursday and were slated to continue on Friday.

The Presidential Emergency Board’s recommendations include pay increases totaling 22% (24% compounded) over a five-year agreement. Five of the 12 unions involved in the negotiations over a new national contract have reached tentative agreements based on the PEB recommendations — though none have yet been ratified. Negotiations were held Thursday and are slated to be held again Friday at the National Mediation Board in Washington.

But unions representing operating crews —the Brotherhood of Locomotive Engineers and Trainmen and the International Association of Sheet Metal, Air, Rail, and Transportation Workers-Transporation Division (SMART-TD) have indicated they have deep concerns over work rules working conditions as well as pay. In a Labor Day statement, the heads of those unions said that because of those rules, “BLET and SMART-TD members are situated differently at this stage of the negotiations than the members of most other rail unions“ [see “News report: Labor secretary joins rail negotiation session …,” Trains News Wire, Sept. 8, 2022].

A statement from AAR CEO Ian Jefferies accompanying Thursday’s report emphasized the pay increases being offered to workers and called on Congress to impose the PEB recommendations in the event of a work stoppage, “rewarding employees and stopping unnecessary economic harm and uncertainty for rail customers.”

The report says about 467,000 additional long-haul trucks would be needed each day to replace the more than 75,000 carloads and intermodal units — containers or trailers — that begin a trip by rail on an average day. This excess capacity does not exist: the American Trucking Association says there is already a shortage of about 80,000

The FRA’s 1992 report concluded that a two-week national rail work stoppage would result in 570,000 layoffs in rail-served industries and $1 billion per day in lost output. The AAR report estimates the financial cost today could be double but offers no figure on possible job losses. It also outlines potential impacts on commodities ranging from food to automobiles, as well the potential loss of electrical generating capacity resulting from a lack of coal.

The report also says “a freight railroad shutdown would devastate Amtrak operations just as ridership is starting to return,” and that it would “disrupt commuter rail service across the country.”

In the last national rail shutdown — a 1992 strike against CSX by electricians that turned into a national lockout, ended by Congress after two days — national Amtrak operations were indeed disrupted, although operations on Amtrak’s own Northeast Corridor continued. But many commuter rail operations also were able to continue, even those involving operation on freight railroads, by prior arrangement [see “The (In)visible Trains,“ Trains Magazine, September 1992, Page 6].

The Brotherhood of Maintenance of Way Employes Division of the International Brotherhood of Teamsters (BMWED), in a Thursday negotiating update to its members, said that at Wednesday’s negotiations, attended by U.S. Secretary of Labor Marty Walsh, BNSF “refuses to agree to collective bargaining agreement language that is consistent with BMWED’s proposal and the PEB 250’s recommendations, which would ensure BNSF maintenance-of-way employees that drive their personal vehicles to travel to different work locations and worksites would be reimbursed for such.” Other railroads have made such commitments, the union says.

“BNSF President and CEO Katie Farmer needs to bring BNSF in line with the other freight railroads so that we can reach a national agreement,” BMWED President Tony D. Cardwell said in the update. “The reality of maintenance-of-way mobile gang work is that the employees must drive their personal automobiles throughout the work season so that they can meet basic personal needs. Things like securing a hot dinner after a 12-hour workday while on the road. Or grabbing groceries for midweek lunch preparation. Or picking up hygiene or medication necessities from the store. …

“BNSF was party to the lawsuit to compel BMWED to negotiate nationally, and we have a recommendation from PEB 250 that is national. BNSF needs to do the right thing here, just as the other railroads have committed to do.”

The trade group for the fertilizer industry, the Fertilizer Institute, has released a letter it sent to congressional leaders on Wednesday, asking that Congress “urgently begin preparations“ to enact the Presidential Emergency Board recommendations, while also asking for passage of the Freight Rail Shipping Fair Market Act, which would increase the Surface Transportation Board’s ability to address service issues [see “House bill would expand STB’s authority …,” Trains News Wire, Aug. 2, 2022].

“Over half of all fertilizer moves by rail year-round throughout the United States and the timeliness and reliability of fertilizer shipments is absolutely critical,“ Fertilizer Institute CEO Corey Rosenbusch wrote. “If farmers do not receive fertilizer, it results in lower crop yields, higher food prices, and more inflation for consumers. Fertilizer markets have been experiencing extreme challenges for nearly two years, and this includes poor rail service, which is the worst it has been in decades. A comprehensive approach on rail service and operational efficiencies is needed in the short and long term.“

— Updated at 8:42 p.m. CDT to include information on letter from the Fertilizer Instititute; updated at 7:45 a.m. on Friday, Sept. 9, with information from BMWED update on negotiations.