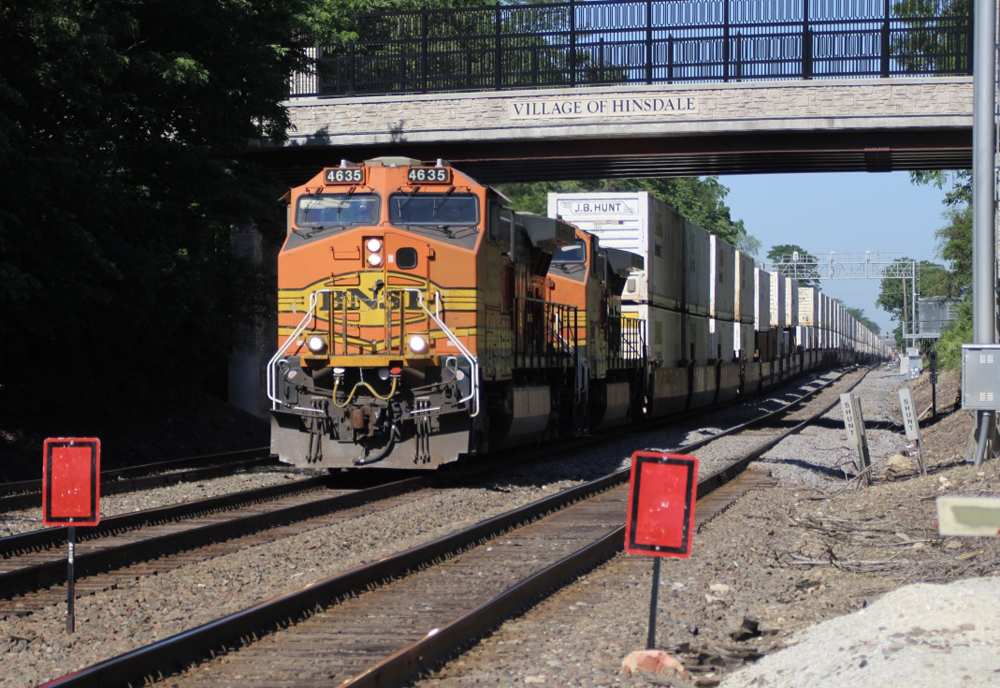 FORT WORTH, Texas — BNSF Railway is limiting the flow of international containers from the ports of Los Angeles and Long Beach to its Logistics Park Chicago intermodal terminal for two weeks to work off a backlog of boxes that have built up in the Windy City.

“BNSF is metering traffic from the West Coast to try to manage it as best we can. The rate of containers tendered to us on the West Coast continues to exceed the rate of out-gates from Logistics Park Chicago,” railway spokeswoman Amy Casas says. “We are confident in our ability to process and unload volume at the rate that we are seeing demand on the West Coast, provided that there is adequate capacity to receive and out-gate that volume at destination.”

BNSF has expanded off-terminal parking and boosted lift capacity by 20% in an effort to keep its terminals fluid amid a spike in intermodal volume.

Last month BNSF CEO Katie Farmer told the Surface Transportation Board that customers were taking as much as two days longer than usual to unload containers and return them to intermodal terminals, which has created a shortage of chassis.

“We are still seeing low rates of out-gate – particularly on weekends,” Casas says. “We continue to engage on a number of targeted efforts with our core ocean carriers, beneficial cargo owners, and the local dray community to work together on this challenging supply chain issue.”

Chicago is the largest single destination for cargo that arrives at the ports of Los Angeles and Long Beach, the busiest port complex in North America. The Port of Los Angeles handled record container volume in June, while the neighboring Port of Long Beach saw volume decline in June from record May levels.

Last week Union Pacific said it would temporarily suspend all inbound moves of international containers from West Coast ports to its Global IV terminal in Chicago for a week. [See “Union Pacific suspends inbound international container shipments …,” Trains News Wire, July 14, 2021] .UP has been dealing with congestion amid slow turnaround times and hopes the halt of inbound moves will allow the terminal to recover.

Shipping line MSC said an Eastern rail partner was restricting the flow of containers from the Port of New York and New Jersey to three inland terminals: Chicago, Cleveland, and Indianapolis.

Meanwhile, in Canada container terminals at the Port of Vancouver have a backlog of imports due to the ongoing fire-related line closures and operational restrictions affecting Canadian Pacific and Canadian National through their directional running zone in British Columbia.

CN seems to be faring worse than CP, according to a Port Vancouver update today. CN had 289,888 on-dock footage, half of which has been sitting on the docks for more than a week. The balance has been awaiting a ride inland for five to seven days, the port says.

CP’s on-dock footage stood at 49,795 feet, with most of the containers dwelling on dock for up to three days, a condition the port lists as “green.”