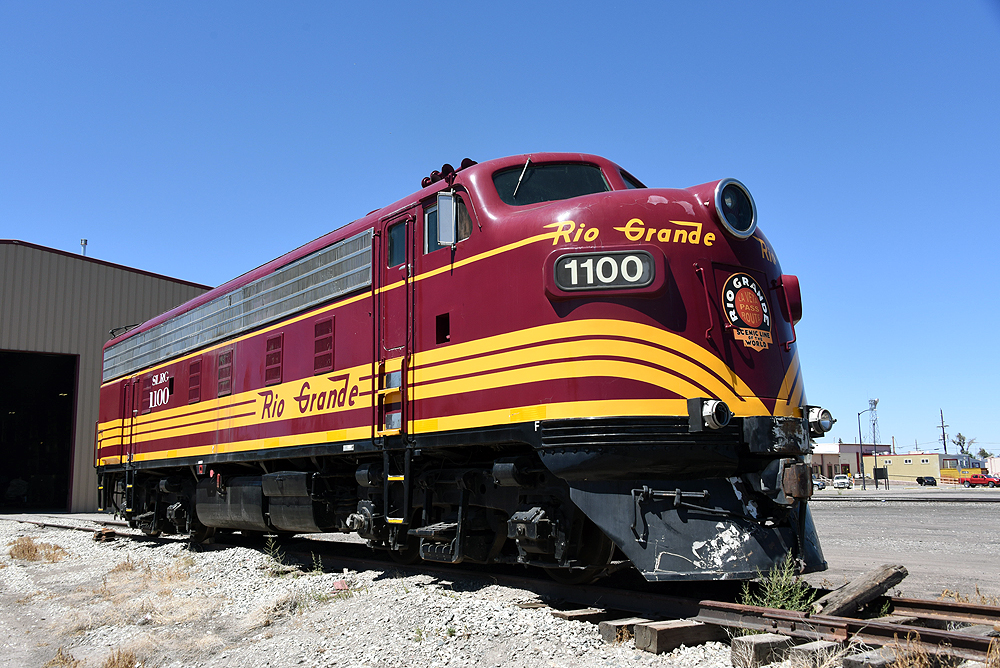 The unrelenting Colorado sun has faded the Illinois Central paint on New York Central diner No. 448 built by Budd in 1947 and now destined for Reading & Northern. Jim Wrinn photograph

These five passenger cars are stored at the Alamosa shop without trucks. They rest on cribbing. Jim Wrinn photograph

One of the most impressive locomotives still on hand in Alamosa is FP10 No. 1100, which began life in 1946 as a Gulf Mobile & Ohio F3 and was later rebuilt for commuter train service in Boston. Jim Wrinn photograph

Slowly plying the branch between Alamosa and Antonito, Colo., the trustee’s SD70M No. 4685 passes a grain elevator at Bountiful, Colo. Jim Wrinn photograph

ALAMOSA, Colorado — Iowa Pacific Railroad equipment rolled out of Alamosa in the San Luis Valley bound for days of fun, music, and beer in the Colorado mountains until just a few years ago. The Illinois Central colors of Iowa Pacific Holdings and the trains of the San Luis & Rio Grande added to the landscape.

Today, in Alamosa, freight trains behind former CSX SD70Ms (leased from Progress Rail) still run on behalf of the trustee placed in charge of the receivership of the bankrupt Iowa Pacific, and Rio Grande Scenic’s rolling stock is for sale, or sold, and waiting on brake valves and inspections before moving out to new homes.

In late August 2021, 11 passenger cars bound for Pennsylvania regional Reading & Northern had been stenciled for their new owner. Freight trains still made the twice weekly trip to Antonito, Colo., on what were once dual gauge tracks of the famed Rio Grande narrow gauge. But tourists no longer clamber on board fun trains. A buyer for the railroad is being sought, but so far the freight operation continues under the trustee.

Gathered at the shop in Alamosa were luminaries in the passenger and excursion train world, including former Southern Railway steam program open-air coach Lookout Mountain and the former Illinois Central streamlined observation-lounge car Mardi Gras. The two cars were parked tail to tail.

The 11 cars bound for R&N will boost the railroad’s fleet of some 30 passenger cars currently used in excursion service over portions of the company’s 400-mile system in east-central Pennsylvania.

• Former SL&RG No. 59, a full-length “Super Dome” car built by Pullman-Standard in 1952 as part of a 10-car fleet for the Milwaukee Road’s Olympian Hiawatha and Twin Cities Hiawatha service. Built as Milwaukee No. 59, it will join another former Milwaukee full-length dome already on the roster, R&N No. 4, Lehigh Gorge, formerly Milwaukee 55. The newly acquired car will become R&N No. 5. It formerly ran on Amtrak trains as car No. 9383 and subsequently in tour-agency service. It differs from R&N No. 4 in that its appearance was modified with the addition of fluted-side skirting.

• Former SL&RG No. 3305, Mardi Gras, a streamlined observation-lounge rebuilt in 1947 from Illinois Central 1916 heavyweight 88-seat coach 2188 to serve on the City of New Orleans, IC’s secondary intercity train on the Chicago-New Orleans route. This car has a long history in excursion service for the New Orleans and Roanoke chapters of the National Railway Historical Society. It will become R&N 7.

• Former SL&RG No. 1125, Ellerslie, a streamlined sleeper, built by Pullman-Standard in 1954 for Canadian National and later operated by VIA Rail Canada. An eight-duplex-roomette, four-double-bedroom, four-roomette car, it will be renumbered to R&N 1125.

• Former SL&RG No. 448, originally New York Central diner No. 448 and later Penn Central No. 4548, and subsequently owned by the High Iron Co. excursion operation. A streamlined stainless-steel car built by the Budd Co. in 1947, it will become R&N No. 1166.