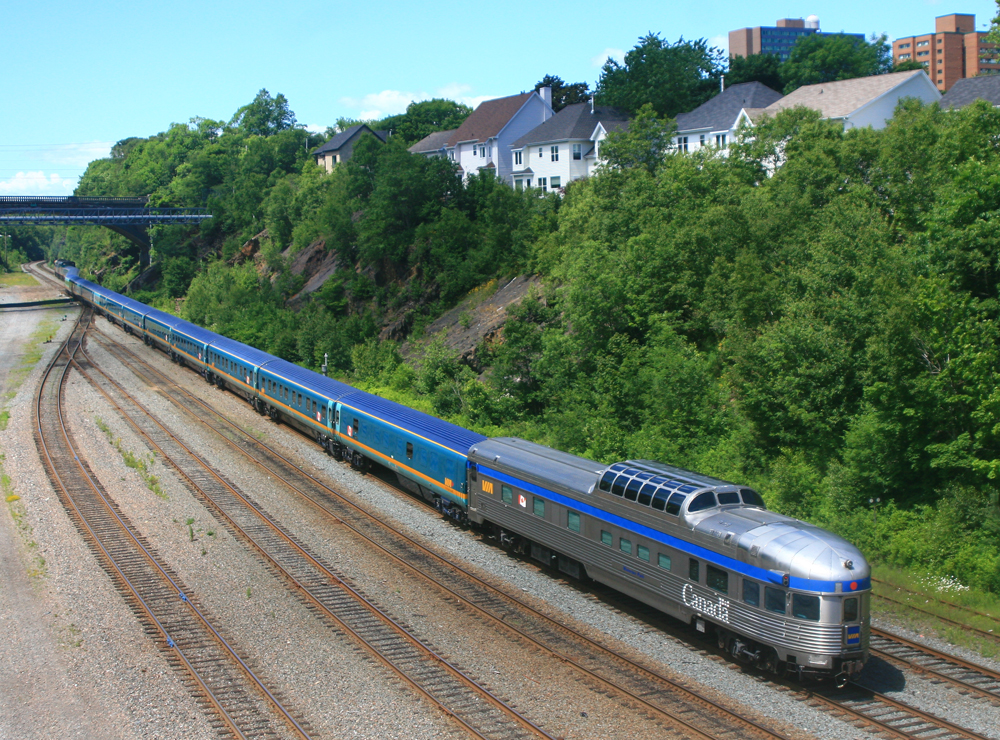 MONTREAL — VIA Rail Canada says it is relaunching its last suspended route on Wednesday, Aug. 11, when the formerly triweekly Ocean departs Halifax, Nova Scotia, for Montreal for the first time since March 2020. The overnighter’s first eastbound return is set for Sunday, August 15.

Service is finally resuming as a result of “progressive reopening of provinces and the recent developments related to health measures in the region,” according to a company statement released Friday.

As previously announced, the latest Ocean iteration will be a mix of European-designed Renaissance all-bedroom sleeping cars; a Renaissance diner flanked by two service cars with snack bars, lounge space, and accessible bedrooms; and Budd-built stainless steel equipment (designated by VIA as HEP-1 and HEP-2) dating from 1955. These will include economy coaches, a Chateau sleeper for the onboard service crew, and a baggage car.

An empty Renaissance baggage car will also be in the consist to act as a safety buffer between the two equipment types; it would prevent telescoping of the sturdier Budd cars into occupied Renaissance cars should there be a derailment. The car formerly was positioned to provide passage to additional Chateau cars, which have duplex roomettes, bedrooms, a drawing room (VIA’s “cabin for 3”), and a rear-facing Park dome-lounge-observation sleeper.

However, because VIA lost access to a loop track it does not own at the Port of Halifax, the train can’t be turned at the stub-end Halifax station. VIA is at least temporarily withdrawing the Park rather than running it in one direction next to the locomotives, which will operate back-to-back and run around the consist at Halifax for the return trip to Montreal. Since seats in Renaissance coaches can’t be turned, this is also the reason the HEP-1 stainless steel coaches are substituting.

A VIA spokesman confirmed to Trains News Wire that unlike on the Canadian, where breakfast and dinner are served in the diner, meals for sleeping car passengers “will be provided in-cabin only, and will have to be eaten in cabins.”  As is the case on the Canadian and corridor trains, coach passengers can order food at their seats from carts, but lounge space is off limits.

A reservation system advisory does offer this caveat:  “Due to COVID-19, we have had to make changes to our on-board services and overall experience. While full inventory remains available on these trains after Oct. 1, 2021, as we approach the date, we will update customers as it becomes clear what service will actually be possible based on the evolution of the pandemic.”

In last week’s statement, VIA President and CEO Cynthia Garneau says the “gradual return to service in the region” is necessary because “to follow and respect guidelines and recommendations from public health authorities and provincial governments, we could not provide our passengers the service and frequencies offered under normal circumstances.”

The service resumption follows the pattern VIA has chosen over the past year with all routes outside the Quebec City-Windsor, Ont., corridor, where the company has periodically restored additional daily frequencies. Other services, such as the Toronto-Vancouver, B.C. Canadian and remote-service trains operating in rural British Columbia, Ontario, and Quebec are still running only one weekly round trip.

The exception is VIA’s Winnipeg-The Pas-Thompson-Churchill, Manitoba, service, which has maintained its pre-pandemic schedules to serve rural communities without other surface transportation options.

Communities served by the overnight Ocean have roads but few public mobility choices, so the train’s prior six-day-per-week or triweekly schedules more closely resembles what VIA has been offering in Manitoba rather than on the Canadian’s four-day, multi-province journey. It is likely the Ocean’s long-term health and relevance depends on how quickly VIA can restore more frequencies.