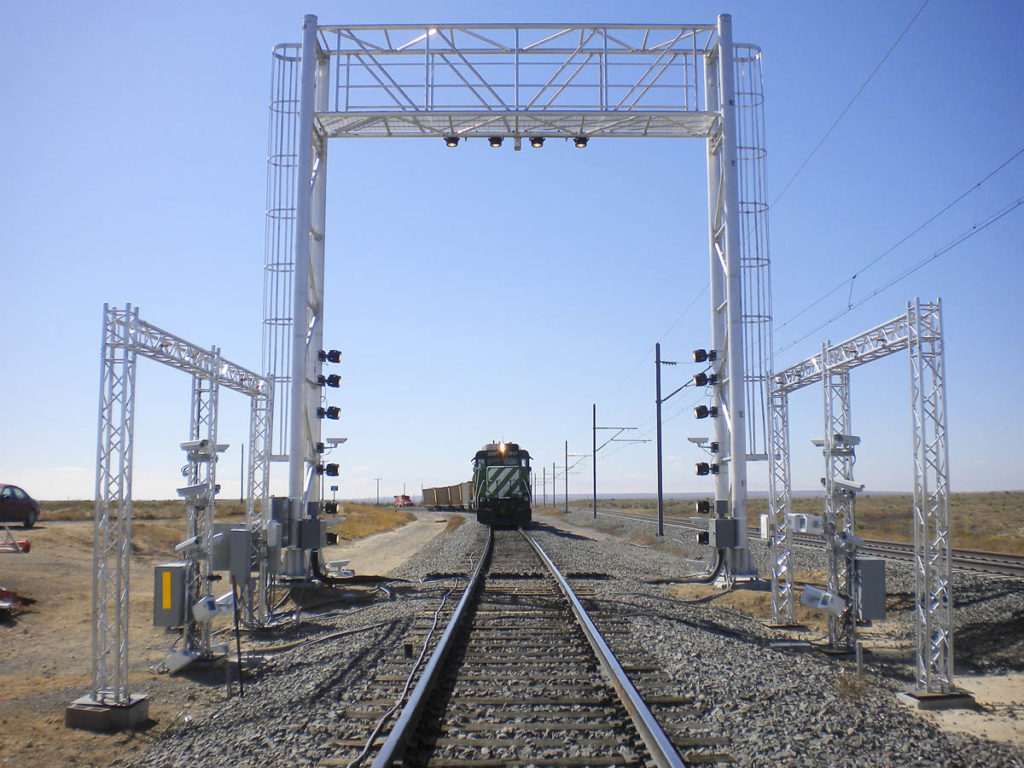 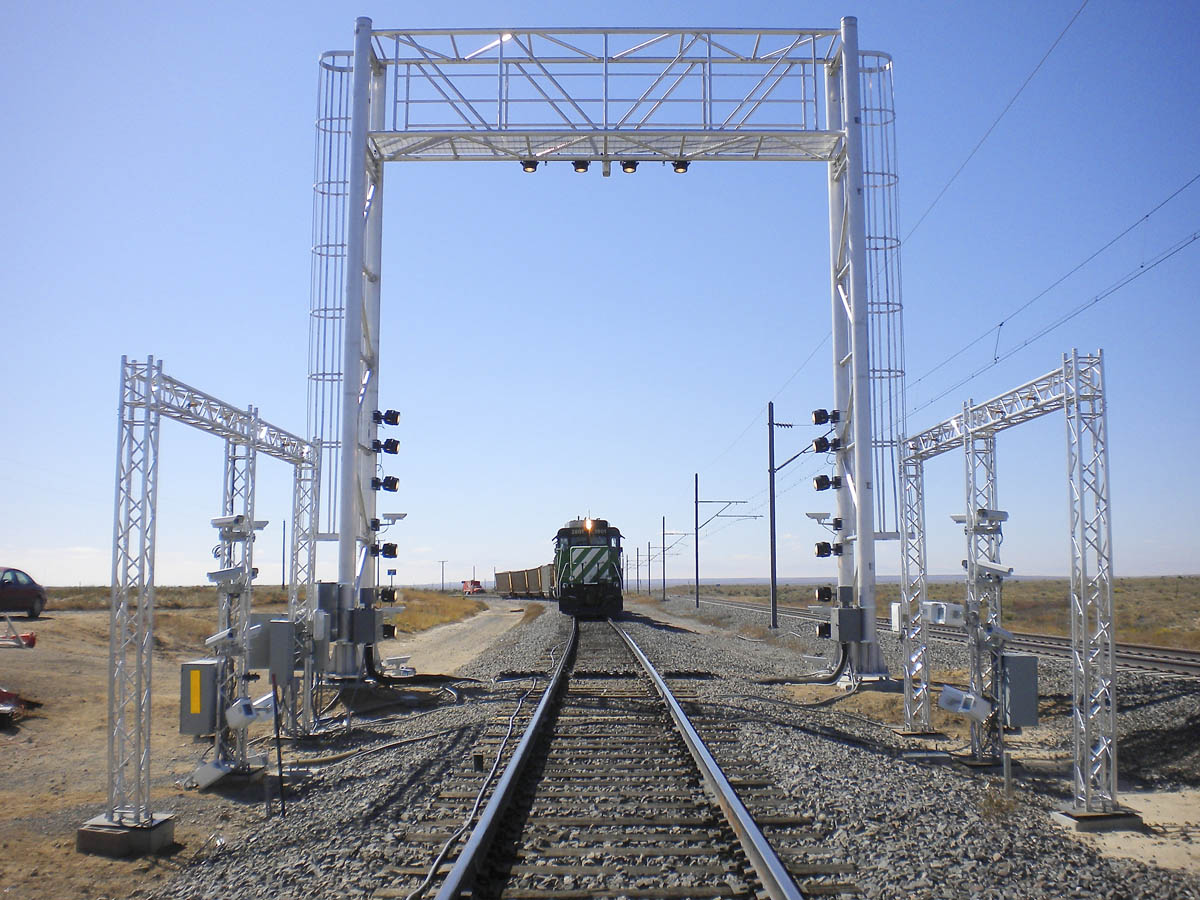 Beena Vision System’s TrainView inspects an entire freight train at speeds up to 60 mph at a testing facility in Pueblo, Colo.
Beena Vision Systems Inc., Transportation Technology Center Inc.
On BNSF Railway’s main line through Cajon Pass in California, poles and sensors pop up along the side of an S-curve.

As a group, the sensors (14 altogether) are a “truck performance detector,” one of thousands of wayside detectors throughout North America that inspect train components and make reports in streams of numbers. They will soon be joined by detectors with “machine vision,” that can photograph and interpret images for defects, as the rail industry seeks greater automation overall.

Steve Mace, a vice president for Progressive Rail Technologies in Pueblo, Colo., the company that maintains the Cajon detector, says he and his colleagues are working on detectors that use mostly high-definition cameras. Early versions already sense locked (or unlocked) hopper doors in Sterling, Colo., while a Blytheville, Ark., unit detects proper placement of loads from steel mills. “It’s easier for people to understand a picture of a defect than a number,” Mace says.

Beena Vision hopes to marry railroads’ desire for more wayside automation with a recent push for inspecting more freight car components simultaneously by combining the company’s multiple systems. The resulting TrainView scanning system, set for testing later year this in Toronto, Ontario, would scan and inspect the sides and top of a freight train moving at up to 60 mph. 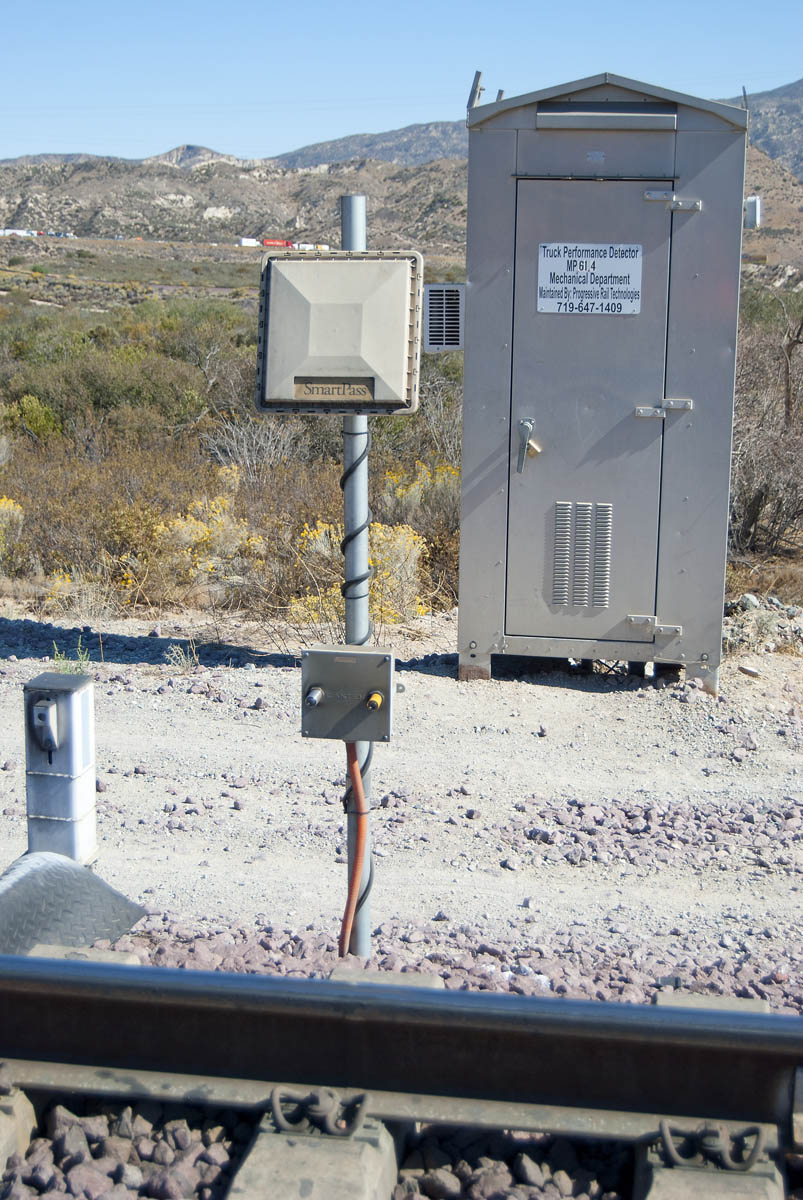 A handful of the high-tech parts that make up a truck performance detector in Cajon Pass.
Steve Sweeney
Computer-interpreted images would enable visual-inspection reports within 15 minutes of a train’s passing. The system would automatically flag freight cars with defects and provide detailed measurements along with the images as backup. “That way, you only send someone out to inspect a car when there is really something wrong with the car,” Nayebi says.

One challenge to increasing a wayside detector’s usefulness is in fine-tuning formulas that enable a computer to recognize normal and defective equipment. Traditional detectors are no exception.

Brad Kerchof, director of research and tests at Norfolk Southern, says that while derailments caused by hot bearings (the very thing “hotbox” detectors check for) are down “dramatically,” false stops are enough of an industry problem (NS had more than 750 false stops in 2012) that railroads are studying the problem further.

In the meantime, Kerchof and others are now relying more heavily on acoustic bearing detectors. Acoustic detectors identify sounds from within wheel bearings, unlike conventional detectors that measure temperature only. And, unlike a hotbox, a car with troubling-bearing noise can be safely set out at the next repair point, instead of stopping the whole train immediately. Kerchof says bearing tear-downs show that the technology is reliable, and when combined with hotbox detectors, increases safety.

Railroads are also thinking of how to re-use old technology. The latest concept has railroads testing whether hot wheel detectors are as good for measuring air-brake effectiveness as they are for catching sticky brakes. Later this year, NS will use two detectors to measure, in sequence, warm wheels (indicating brakes applied) and cold wheels (indicating brakes released) along its main line near Altoona, Pa.

This story originally appeared in the March 2014 issue of Trains Magazine.