The railroad version of snow shoveling 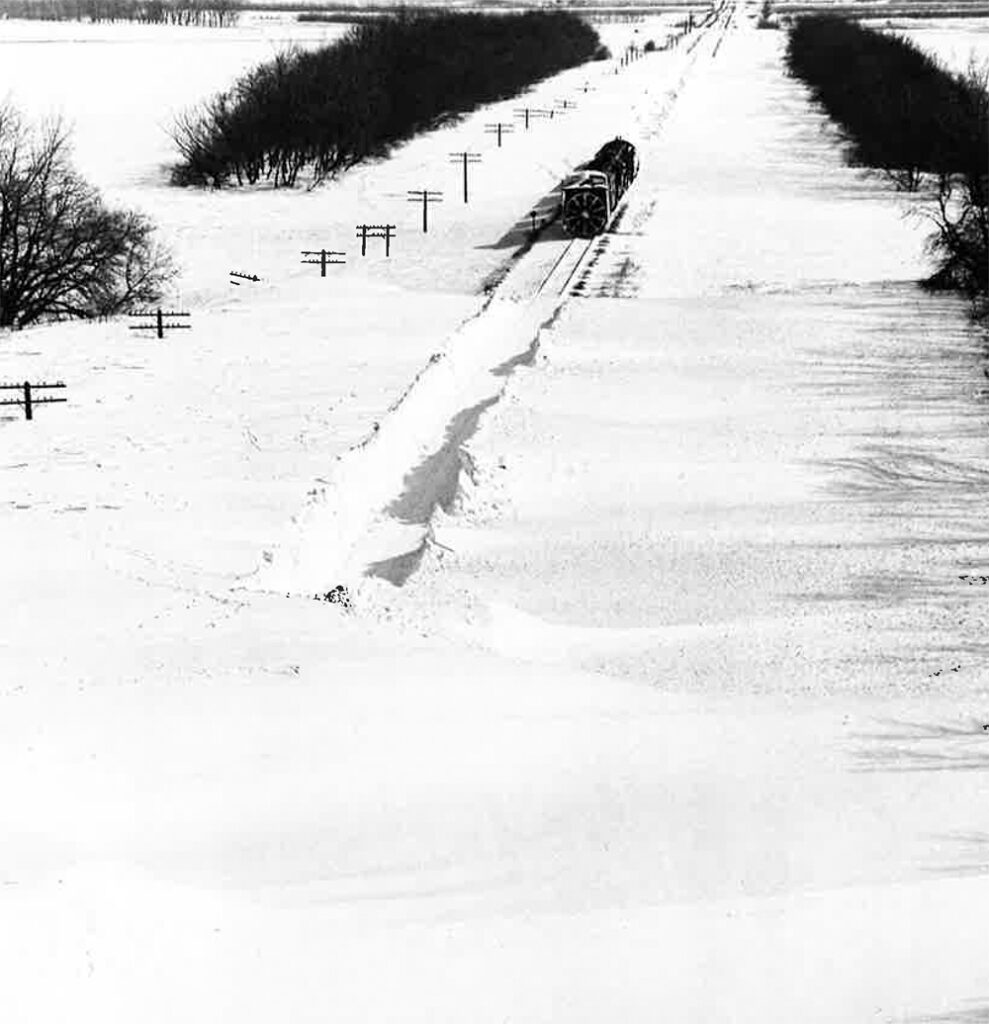 Railroad snow plow methods in North America: Railroads do use some of the same tools as the rest of us for clearing sidewalks and driveways. But, when it comes to clearing the tracks, the tools get significantly larger. The idea of what to do with the snow remains fairly similar: Get it as far away from the place that you don’t want it in as possible.

In general, the railroad snow removal pattern goes something like this: The pilot on most diesel locomotives is designed to serve as a plow for average snowfalls. Moving aside even a foot or two of snow or busting through the accumulation at a grade crossing is easy work for such equipment.

Up, over, and out

Now let’s go to the next level: Out in the wide-open country, where there is plenty of space for the wind to whip the snow around, cuts can drift full in short order. While all those little flakes are filling a cut, they do their best to get packed in as tightly as possible. Throw in a little winter sun for just a touch of melting and refreezing, and those flakes will pack together forming a drift as tough as a brick wall. Depending on the depth of the cut, the drift could be a few inches to several feet thick. At this point, moving the snow up, out, and away from the cut is the order of the day.

The snow fighting tool usually called to action now is the wedge plow. Shoved along by one or more locomotives, the wedge plow looks like a cross between a sideways triangle and an ocean wave. Moving along at track speed, the wedge cuts into the snow. Then the conical shape of the ocean wave helps toss the snow up and away from the tracks. Some wedge plows will have wings, just like a truck-mounted road plow, enabling them to clear a wider path. The wings on some plows have angle iron attached at a 45-degree angle to the tracks. This helps throw the snow up and away, as well.

The most popular wedge plow was built by the Russell Car and Snow-Plow Co., of Boston. J.H. and J.W. Russell established their business in 1893 and received a number of U.S. patents for plow design innovations. Their 1898 catalog illustrates how a 12-inch by 12-inch oak beam — that they called the “buck bone” placed behind the main wedge blade — allowed a Russell plow to cut through snow at 35 mph and move drifts up to 14-feet tall even on curved track. The catalog offered a number of plow configurations including the monster size No. 2 Wing Elevator Snow Plow. This snow-shoveling beast measured 42-feet long, and over 11-feet tall. With its wings fully extended, it could clear a 16-foot-wide swath. The plow tipped the scales at 67,000 pounds, or 33 ½ tons, with no additional ballast.

Can’t go over? Go through

Looking around from the top of this drift, it looks like we are vertically challenged — translated: the drift is too high for the wedge plow to throw the snow clear of the tracks. It’s time to break out the industrial-sized snow blower — the rotary plow. It snowed last night, and many before that as well.

Dependent on speed, a wedge plow rams the drift, breaking the snow loose, sending it flying. The rotary plow approaches slowly, usually traveling about 4 to 8 mph. On the business end of the rotary is a 10-foot diameter wheel with fins that dig into the snow. The blades spin at 80 to 90 rpm. Once snow is digested, the rotary sends it flying over 200 feet away from the tracks. Some rotaries have wings on the side of the blade housing that increase the cut to between 12-and-14-feet wide when opened.

Rotary plows are pushed along by locomotives. In the steam era it might take three or four locomotives to provide enough power. Today, usually two, sometimes three, diesel locomotives will do the job. Initially, the rotaries, themselves, used steam power from an on-board boiler, to throw snow. Today, rotaries in regular railroad operation are powered in the same manner as a diesel-electric locomotive.

Calling out the rotaries is generally the last line of defense in railroad snow fighting. The work is tough, and the environment can be hazardous, especially when plowing remote territory. The Union Pacific will employ its rotary plows over California’s Donner Pass when the snow gets deep enough. When called, four rotaries will attack the pass. The plows work in two trains. Each train has two plows facing in opposite directions with two SD70ACe locomotives sandwiched in between. In this configuration, the train can plow in either direction.

The rotary plow is a time-tested tool in the snow-fighting lineup. The rotary concept is credited to Canadian dentist J.W. Elliot, who developed the idea in 1850. Elliot’s idea was a machine that could move mounds of snow based on rotary motion. Unfortunately, Elliot did not pursue his concept and it lay dormant until 1883. Then, fellow Canadian, Orange Jull took the rotary concept all the way to a working model that he tested on sand dunes. Jull then sold the working design to the Leslie brothers, who in 1883, began to build rotaries on a commercial scale.

There is much more to the railroad snow fighting story. We’ll save more tales for the next snowstorm. Before we go, there is one other method of railroad snow removal we should talk about — hand shoveling.

As snow piles up, switches will become clogged with the white stuff. The accumulated snow and ice need to be cleaned out before the switch will work properly. While there are machines that can do the job, many times it comes down to manpower, with brooms, ice picks, and shovels, to clear out a switch and ensure that it will open and close properly. If you have ever had the experience of cleaning ice and snow from a switch, it is an experience not soon forgotten, nor one that is desired on a regular basis.

One thought on “Railroad snow plow methods in North America”