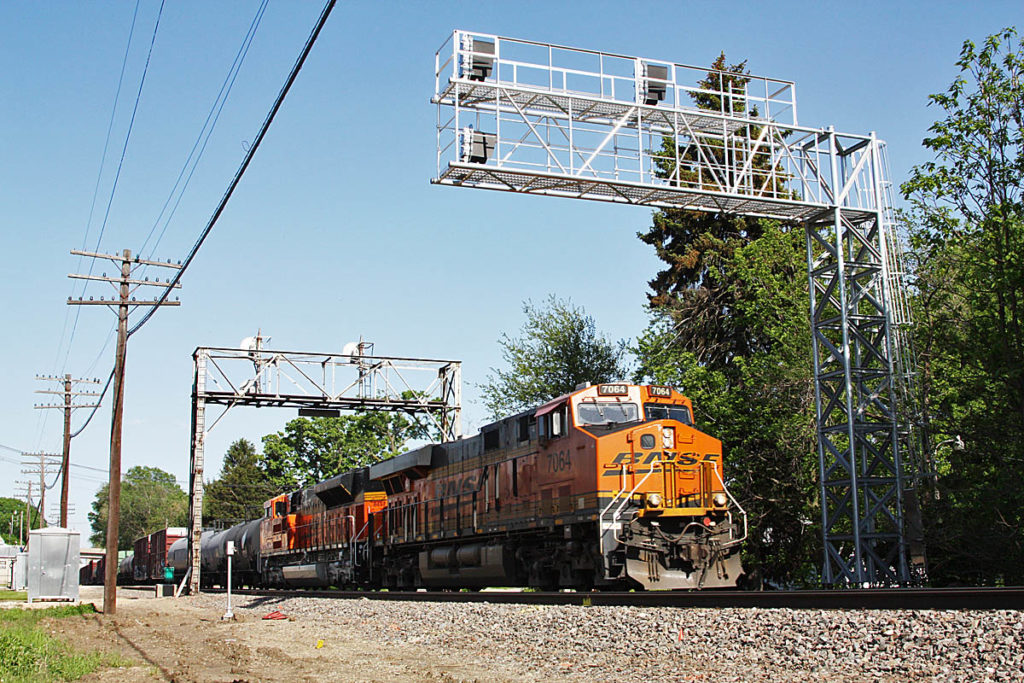 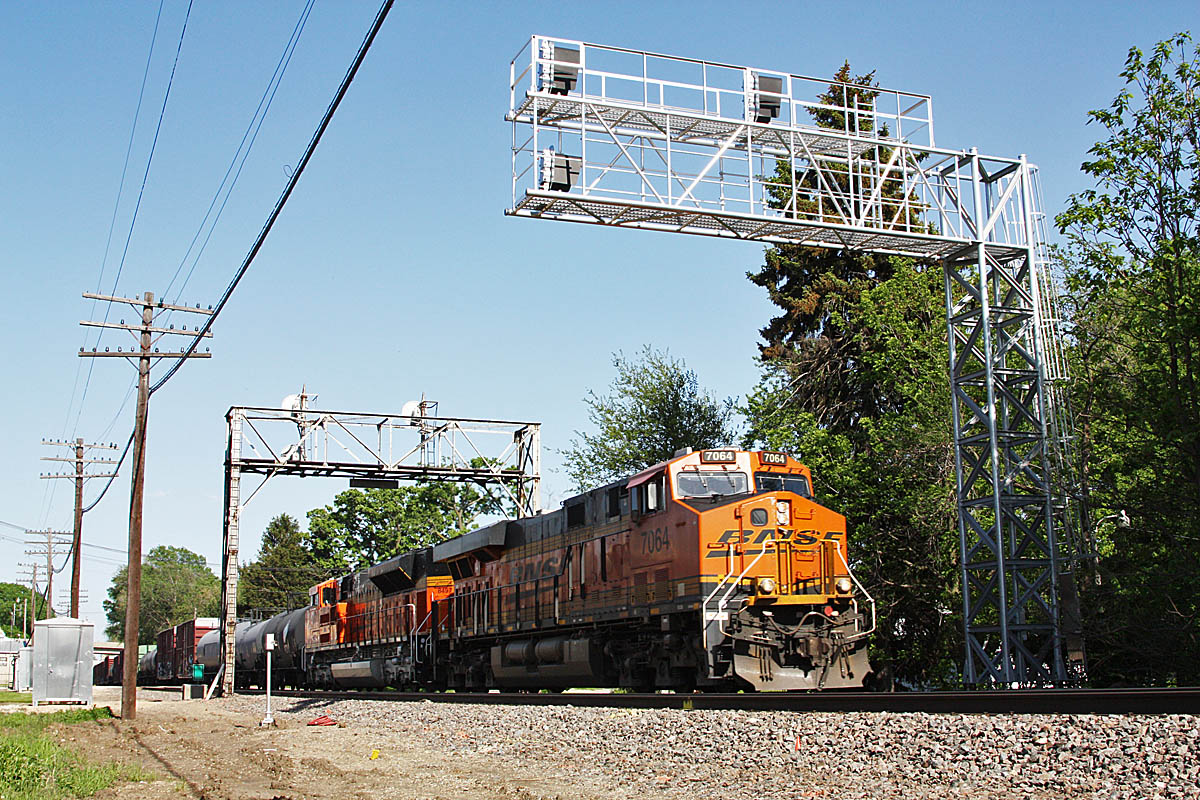 A westbound BNSF train passes signals old and new at Rochelle, Ill.
Thomas E. Hoffmann
Absolute signal: A signal whose “stop” indication means “stop and stay.” Usually identified by the absence of a number plate, but may also have a plate displaying the letter “A.”

Automatic Block System (ABS): A series of consecutive blocks governed by block signals, cab signals, or both, actuated by a train or engine, or by certain conditions affecting the use of a block (i.e., an open switch or a broken rail).

Approach signal: A fixed signal used in connection with one or more other signals to govern the approach to the other signal or signals. (Also called a “distant signal.”)

Block: A length of track of defined limits, with block signals or cab signals, or both, to govern its use by trains and engines. (Block lengths vary depending on desired operating speeds and other factors governing the trains’ stopping distance. Typically they range from a half-mile to two miles long.)

Block signal: A fixed signal at the entrance of a block to govern trains and engines entering and using that block.

Centralized Traffic Control (CTC): A system under which train or engine movements are authorized by block signals whose indications supersede the superiority of trains for both opposing and following movements on the same track.

Communications-based train control (CBTC): A specific series of technologies that rely on radio signals, and often embedded track transponders, to locate trains and communicate orders to locomotives based on track conditions, geography, weather, and maintenance-of-way zones. Most positive train control systems used in the U.S. will use some form of CBTC.

Current of traffic: The movement of trains on a main track in one direction specified by the rules.

Fixed signal: A signal of fixed location indicating a condition affecting the movement of a train or engine. (This definition includes such signals as switch, train order, block, and interlocking types, as well as stop signs, slow signs, yard limit signs, and other permanently installed indications.)

Grade signal: A permissive signal used along a steep climb and identified by both a number plate and a plate with the letter “G.” The governing rule is usually that a full-tonnage train climbing the grade may pass a grade signal indicating stop without stopping. Grade signals are used to keep heavy trains moving under conditions where the stopping distance is greatly reduced by the hill and restarting would be difficult.

Home signal: A fixed signal at the entrance of a route or block to govern trains or engines entering and using that route or block.

Interlocking: An arrangement of signals and turnouts with their controls so interconnected as to prevent conflicting movements through any combination of tracks such as junctions, crossings, and crossovers. May be operated manually or automatically, and also by remote control.

Interlocking signals: The fixed signals of an interlocking.

Interoperable Electronic Train Management System (I-ETMS): The branded train control system from Wabtec that most Class I railroads will install in the U.S. to meet positive train control requirements. This system relies on global positioning satellites to locate trains.

Manual block system: A block or series of consecutive blocks governed by block signals operated manually, upon information transmitted by telegraph, telephone, or other means of communication.

Positive train control (PTC): Any combination of electronic and mechanical technologies that will affect a train’s movement, including stopping a train, without input from the onboard train crew. In the U.S., PTC technologies must do four things: prevent train-to-train crashes, enforce speed limits, protect track workers, and keep trains from running through a misaligned switch.

Track circuit: An insulated section of track with (in simplest form) a battery connected to the rails at one end and a relay connected at the other. The relay is normally held closed by the current flowing through the rails. When the rails are “shunted,” connected together, by the wheels of a car or locomotive, the relay opens to indicate that the track section is occupied.

Why does the Reading & Northern seem to have so many covered hoppers?