Home / Train Basics / ABCs Of Railroading / All about air horns

Two builders supply them. Minimum sound standards and where they’re placed both matter 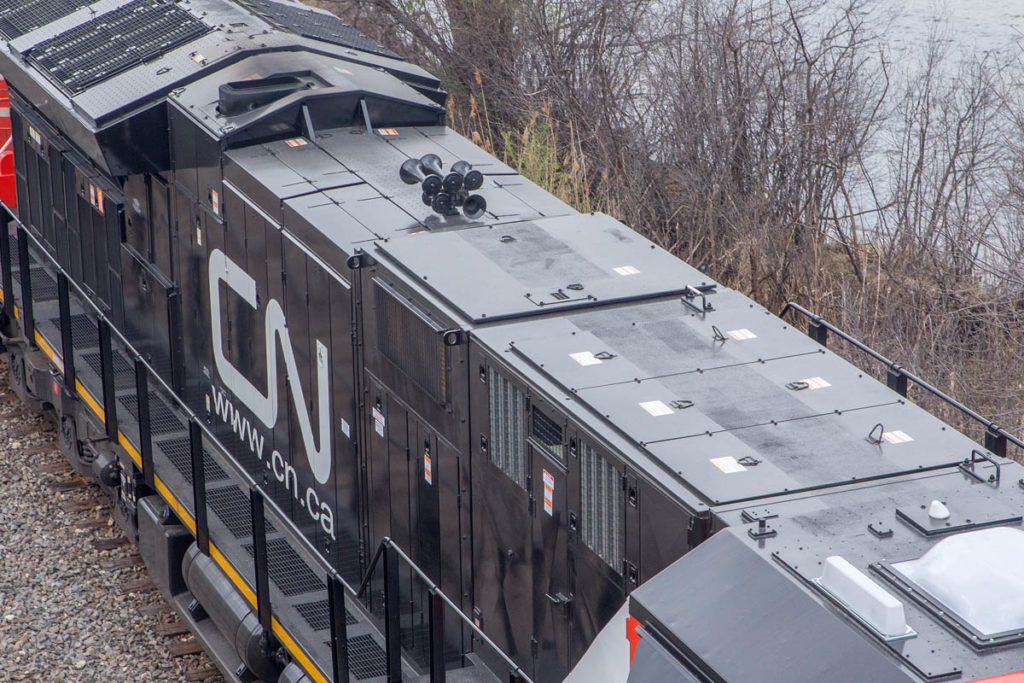 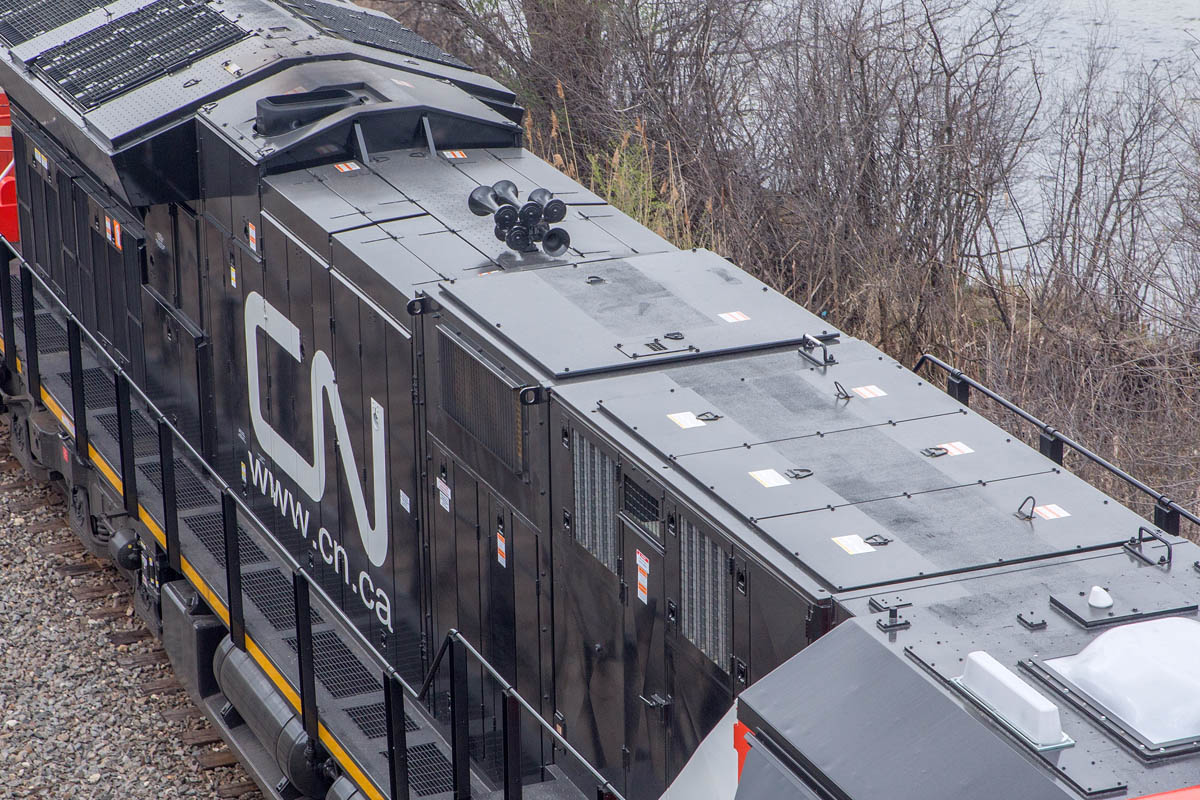 Horns are typically placed near the middle of the locomotive to minimize noise to the crew. New Canadian National ET44AC No. 3062 shows off its Nathan K5HLR2.
Chris Guss
A horn is one of the many safety appliances installed on a locomotive and is used to warn both the general public and railroad employees while in motion. Outside of special areas such as quiet zones, trains are required to sound their horn before occupying one of the approximately quarter-million public and private railroad crossings in the United States.

Locomotive horns date back to the steam days, with single-bell horns generally applied on a steam locomotive. This practice was carried over to the early diesel locomotives before the multi-bell horn began to see increased use in the industry. With a multi-bell horn, freight railroads would typically reverse one or more bells to provide warning toward the rear of a locomotive when it’s operating backward.

Railroads that didn’t choose this option and kept all bells facing the front of the locomotive would often place a single-tone horn, or in some cases a second multi-bell horn, on the locomotive to provide ample warning when operating in reverse. While most locomotives built new with two horns are gone, many former Southern Railway locomotives are still in service on Norfolk Southern with two horns, one mounted on each end of the locomotive. On these locomotives, only one horn is active at any given time and usage is based on the position of the reverser handle in the cab.

The two largest companies that provide horns to the industry are Nathan Airchime and Leslie Controls. While Leslie horns were common on new locomotives years ago, the majority of new freight and passenger locomotives today are equipped with Nathan horns.

For a period of time, many railroads went to great lengths to find just the right horn to produce a sound that was pleasing and effective. Today, horn selection for modern locomotives are primarily driven by federal regulations on sound levels. The current requirements for locomotive-horn performance date from 2006 and stipulate a minimum and maximum decibel range the horn must produce to be compliant. 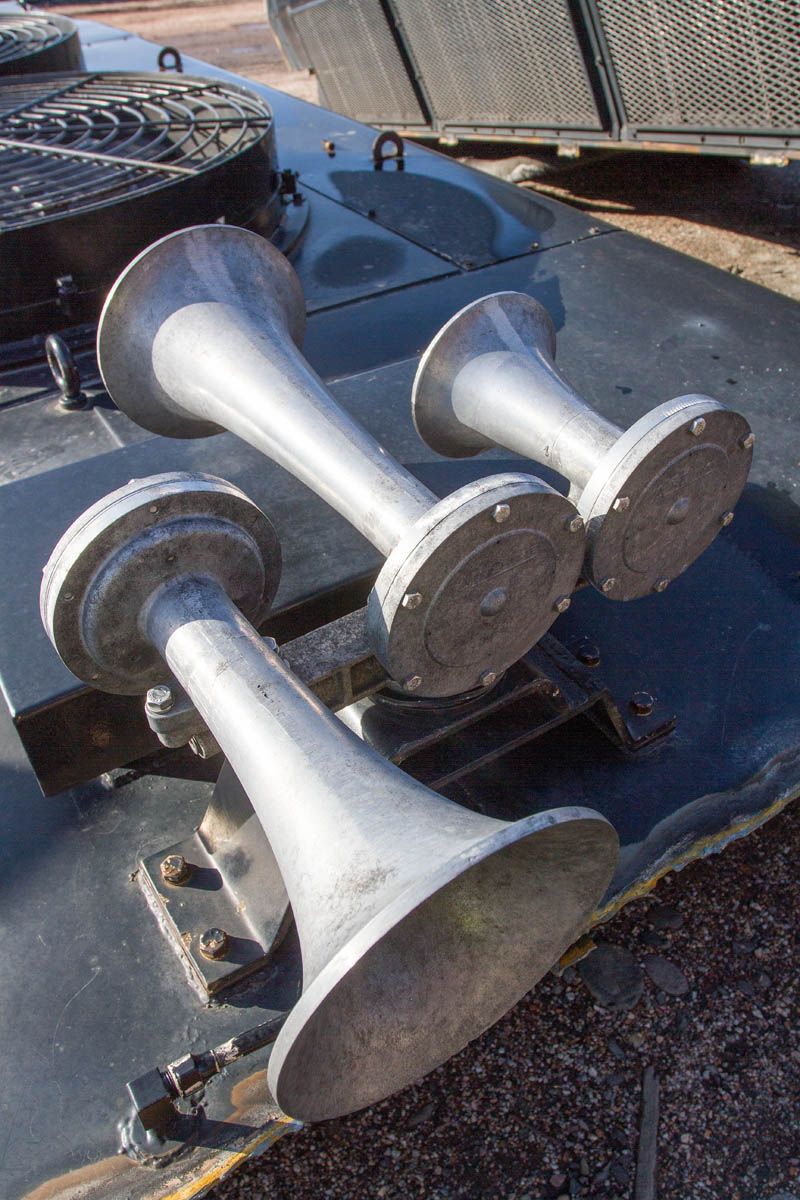 Three-chime Nathan Airchime air horns are still common, but most new locomotives are equipped with five-chime versions.
Tom Danneman
Specific testing parameters also exist to give consistent results during the testing procedure. To be certified, the horn must produce between 96 and 100 decibels at a distance of 100 feet, measured 4 feet above top of rail for cab or low-mounted horns or 15 feet for hood-mounted horns. Locomotives must be tested in both directions of travel. Weather conditions during a test also specify a temperature and humidity range, maximum wind speed, and no precipitation. The rules also require a location with no large reflective structures that could affect the readings being taken.

Federal regulations also allow an acceptance sampling scheme for large batches of the same locomotive model that use the same horn type and position. This saves time and money to the railroad or builder, which would otherwise have to test and certify each locomotive individually.

General Electric and Electro-Motive Diesel had to explore alternate horn options and placement with the increased hood height required for new Tier 4 emission-equipped locomotives. The added height was preventing adequate sound from the horn to radiate toward the rear of the locomotive.

While GE’s demonstrator locomotives used two horns, one above the engine and a second on the rear of the long hood, its final locomotive design allowed it to use the standard Nathan horn and placement found on Tier 3 locomotives. EMD’s Tier 4 demonstrators also have a two-horn setup in the same positions as the GE demos, though it’s unknown if this arrangement will be used on production locomotives which are scheduled to begin assembly later in 2016.

This story originally appeared in the July 2016 issue of Trains Magazine.

One thought on “All about air horns”