Home / Train Basics / ABCs Of Railroading / Ahead of the rest 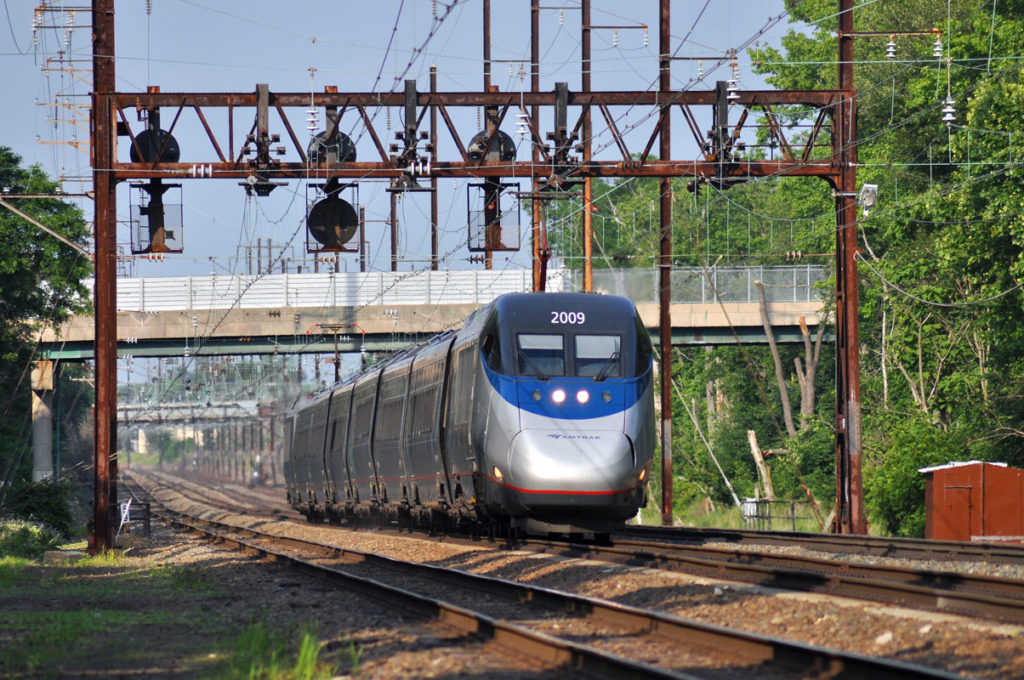 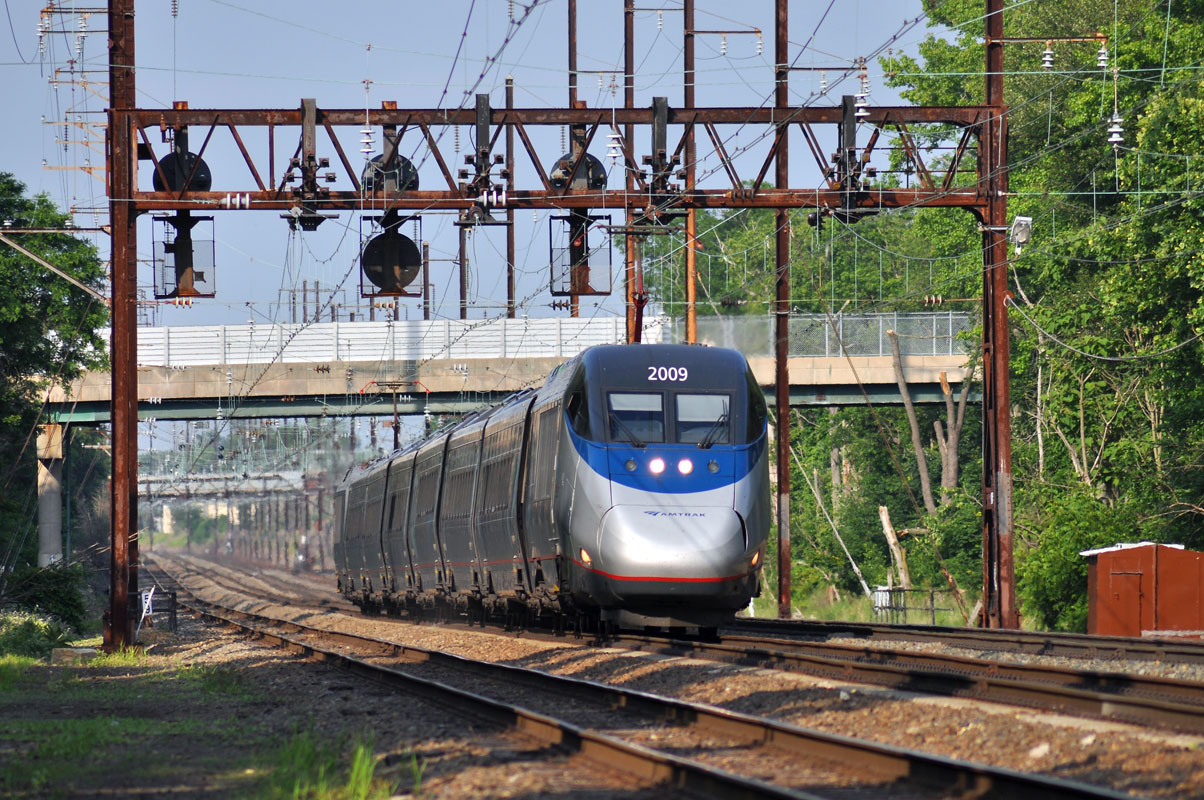 A southbound ‘Acela’ races across a stretch of positive train control trackage on Amtrak’s Northeast Corridor at Perryville, Md., on June 5, 2011.
Michael T. Burkhart
This story first appeared in the October 2011 issue of Trains Magazine. The Advanced Civil Speed Enforcement System highlighted here was not active at the time of the of the fatal May 12, 2015, derailment of Amtrak train No. 188 in Philadelphia. It has since been placed in service on that segment of the Northeast Corridor.
While the nation’s freight railroads scramble to put positive train control in place by the end of 2015, Amtrak has used a crash avoidance system on parts of the busy and fast Northeast Corridor since 1999. Amtrak put the first segment of its Advanced Civil Speed Enforcement System, or Acses (pronounced “AX-es”), into operation along the Boston to New Haven, Conn., segment as part of its electrification and modernization program. Acses prepared the route for America’s new fast trains, the sleek Acela Express. On this and two other stretches of the Northeast Corridor, the system guards all trains moving at speeds of up to 150 mph. Predecessors of the system have been used for more than 90 years, beginning in the 1920s when the Pennsylvania Railroad developed its four-aspect cab signal system. The system kept the engineer informed of conditions ahead, even in rain, snow, and fog. The system became increasingly sophisticated in the 1950s with speed control development, which not only required the engineer to acknowledge a signal commanding him to slow, but also brought the train to a stop if he did not respond.

Track improvements for high-speed Metroliners in 1969 underscored the need for a system that would enforce speed restrictions for bridges, curves, and congested areas, as well as temporary speed restrictions in work zones. Fatal wrecks on the corridor heightened the need for such a system, including the infamous 1987 crash at Chase, Md., in which a set of light Conrail units and Amtrak’s Colonial passenger train collided. In that tragedy, drug-influenced engineer Ricky Gates ran a stop signal and struck the Amtrak train, killing 16. Another incident, less severe, took place in 1990, when a student engineer ignored a speed restriction on a sharp curve at the tunnel leading to Boston’s Back Bay station. The train left the rails and struck a commuter train.

Positive train control could have prevented both incidents, and Federal Railroad Administration concerns about increasing speeds after the Back Bay accident prompted Amtrak’s Keith Holt and Larry Light to develop Acses in 1992. They later contracted with Alstom to complete and furnish the system, which is different from the PTC systems freight railroads are developing.

The freight railroads’ PTC system requires constant communication with a back-office server, while Amtrak’s system is less dependent on radio communications. All of the commuter railroads operating on the Northeast Corridor have embraced Acses because it is a proven system, and they all have cab signals on their own railroads. Amtrak has a steering committee comprising representatives of each commuter railroad and Amtrak to ensure that all of the systems will work together.

Amtrak’s system meets the requirements of the 2008 PTC law, with features that make the operation of high speed trains safe and efficient. The equipment never removes the control of the operation of the train from the engineer, whose judgment exceeds the capability of the system under normal conditions. Instead, it gives visual and aural cues that help the engineer handle the train smoothly and efficiently. The signal system that is conveniently and clearly displayed in the cab gives a constant indication of the correct speed for the area traveled, and advance warning of upcoming speed reductions. As the train approaches a speed restriction, information is shown on a display screen, an alarm sounds, and required speed and braking information are prominently shown on the instrument panel. The engineer always knows whether he is within the safe limits established by the on-board computer.

In the event that the engineer becomes distracted, the system provides audible and visual warnings to grab his attention in time to recover safe operation. If the engineer ignores these warnings, the system takes over the operation of the train and slows or stops it smoothly and safely as required by the signal conditions.

The braking profile provided by the on-board computer not only helps the engineer improve train handling, but working with the cab signal system, it enables Amtrak to maximize track capacity by allowing fast trains to run closer together. 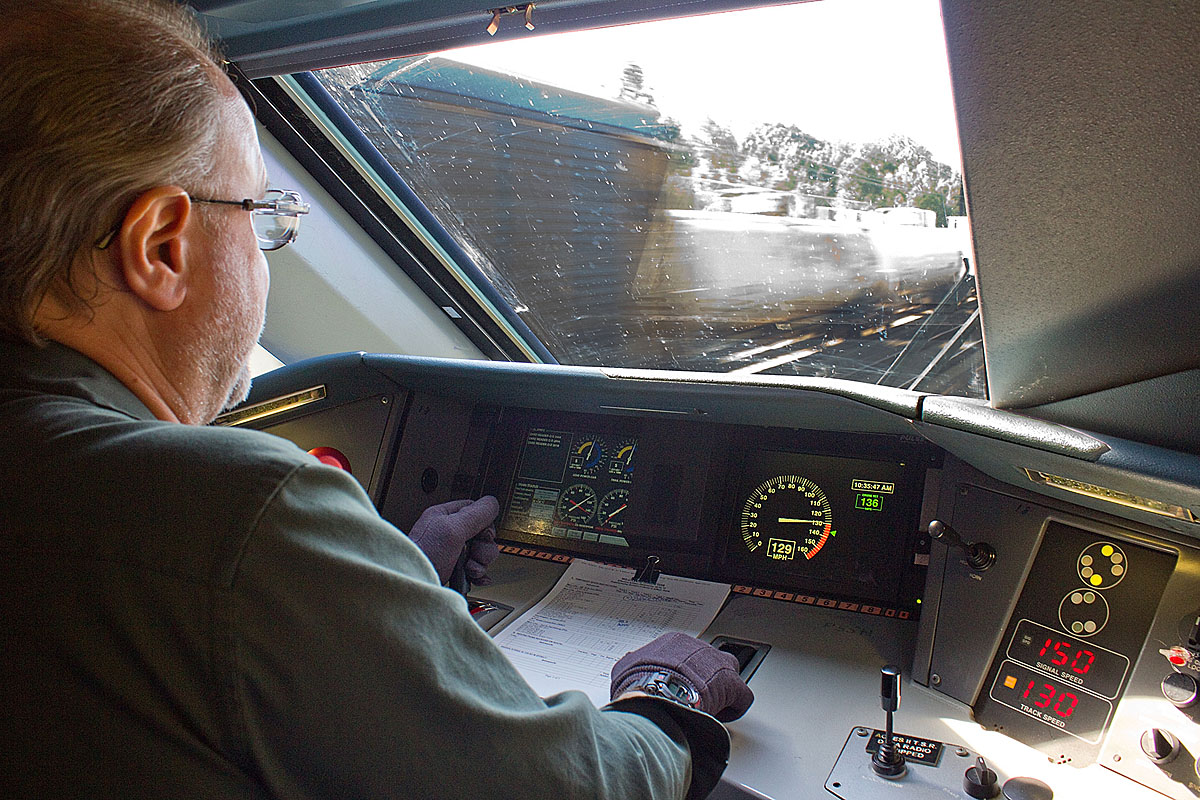 Amtrak Engineer Pete Vilas runs an ‘Acela Express’ between Wilmington, Del., and Baltimore.
Al DiCenso
In the cab
Amtrak’s full-motion cab simulator at the training center near Wilmington, Del., provides a deeper look into the Acses system. System General Road Foreman Don Savidge and Operating Practices Senior Analyst Jay Gilfillan set up a simulated route for me to try out the system.

The simulator is a replica of an Acela’s cab. Ahead of the windshield is a full-width projection screen. With Savidge settled into the engineer’s seat, Gilfillan starts the movie-like scene of the right-of-way, complete with lineside buildings, catenary supports, signals, and even bridges. We “move” as Savidge advances the power handle (Acelas have no “throttle”), and the instruments come to life. Our speed advances quickly to that shown in the “signal speed” window of the aspect display unit to Savidge’s right. The speed allowed by the cab signal indication is just above it, in this case green, or “clear 150”. Below that is the “track speed” window, which now indicates 135 for our location, but will change as we encounter curves, bridges, and the like.

If Savidge does not make a control movement for eight seconds or so, a beep sounds, and the word ALERTER flashes on his panel. He must then tap a small stalk at his right to prevent another warning or the system will begin braking. This assures the system that the engineer has not become disabled. A cab signal change will also set the alerter off, and show the new signal indication as well as the required speed. At the same time, a red border swings downward around the speedometer dial to indicate the new required speed. (Engineers call this the “ring of fire.”) The engineer then has six seconds to begin braking to the required speed. As long as he slows at the rate required by the system’s braking profile computer, the train is fully under his control. If, however, he does not brake sufficiently to bring the train down at the prescribed rate, the system will add braking power to do so.

When a signal calls for a full stop, the computer sets up the correct braking profile and continually monitors the train’s speed and distance to the stopping point. The train must be slowed at the prescribed rate, and brought to a stop 500 feet before the signal, where it cannot be moved again until the on-board computer receives a “stop release” command, either from a signal change that permits movement or by a radio command from the dispatcher.

David James, one of the engineers responsible for the equipment that ties the system together and makes it work, points out a pair of yellow transponders located between the rails near the control point “Ragan,” just south of Wilmington. These transponders communicate with the train via an antenna mounted beneath the locomotive. The transponders’ primary function is to let the train’s on-board computer know its exact location. On-board measuring equipment plots distance traveled, and the transponders correct minor errors caused by wheel diameter variation. The transponders also feed the train information about distances to the next two transponder pairs, the next signal, or the next interlocking.

A data radio link updates the train’s computer with real-time operating information as it approaches each interlocking or junction. The transmitters for these radio links are called base communication packages. Placed along the railroad at strategic locations, they continually send information to the on-board computers regarding temporary speed restrictions and route change details; they also enable dispatchers to keep engineers informed as conditions change.

I also saw the system in action on the Northeast Corridor during a cab ride on Acela Express No. 2151 from Wilmington to Baltimore. With engineer Pete Vilas at the controls, we pass Ragan interlocking just outside of Wilmington, and the Active light on the train control system panel blinks on. Vilas takes us up to the indicated signal and track speed of 135 mph. Even at that speed, the cab is quiet enough for normal conversation, and the ride is smooth, thanks to the train’s tilt system. Soon there’s a beep on the alerter, and the track speed indicator flashes to 125, for a curve ahead. This is the first of several speed restrictions over the gently curving line down Maryland’s Eastern Shore and along Chesapeake Bay. Because no work zones are active today, we won’t see a temporary speed restriction.

Vilas elects to adjust the train’s speed manually, using the power and brake handles. Acelas also have cruise control, and if he wishes, Vilas can set the speedometer “bug” at the desired speed and run “hands off,” with the system controlling power and dynamic braking, until the system calls for a speed change. We reach Baltimore and return to Wilmington aboard a Northeast Regional train, which, even at a maximum speed of 125 mph, seems sluggish compared to the Acela. 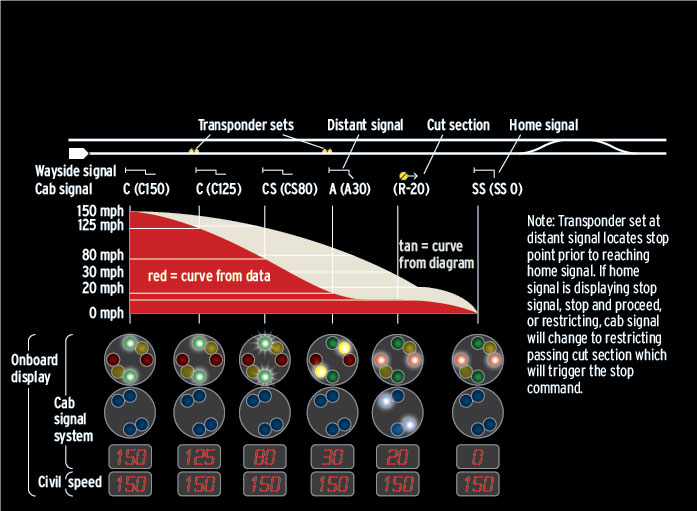 What’s next
On the Boston-New Haven segment, Acelas operate at the maximum speeds permitted. AEM-7 and HHP-8 locomotives are restricted to a 125-mph maximum. North of New Haven, the route has stretches of 150-mph running, with the balance mostly 135 mph. Between New York and Washington, Acses is operational on two short stretches: New Brunswick to Trenton, N.J., and Wilmington, Del., to Perryville, Md., each about 30 miles. These legs will be extended to the entire Northeast Corridor, with completion by the end of 2012. The New York-Washington segment will hold maximum speeds to 135 mph, partly because of curves and congested areas, but mainly owing to the age and design of the catenary.

Under the positive train control mandate, Amtrak will extend the system by the end of 2015 to include Metro-North between New Haven and New York; the Philadelphia-Harrisburg, Pa., “Keystone Corridor,” and the New Haven-Springfield, Mass., line. The cost: about $100 million.

As the system covers these areas, commuter and freight railroads with trackage rights over Amtrak must equip their locomotives with Acses technology. These operators include SEPTA, MARC, NJ Transit, Metro-North, Norfolk Southern, and Connecticut DOT. North of New Haven, MBTA, Providence & Worcester, and CSX in the Boston area are already equipped.

One additional change that will take place as a result of the system’s implementation is to eliminate wayside signals except at control points or interlockings. Instead, the 10-aspect cab signal system will provide all necessary information between control points to the engineer inside the cab. This will eliminate the costs of keeping the old-style signals in operation.

The next time you’re cruising along at 130 mph on the Acela Express, just remember, it’s thanks to the magic of a train control system created nearly 20 years ago.

3 thoughts on “Ahead of the rest”