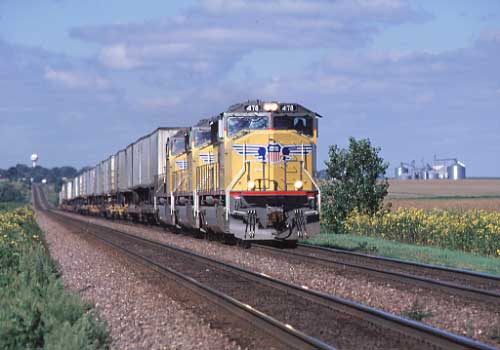 UP acquired the Western Pacific in 1981 and the Missouri Pacific in 1982, extending its system to San Francisco and throughout the south central states. In 1988, it added the Missouri-Kansas-Texas (“the Katy”), linking Kansas City with Houston and San Antonio.

On September 11, 1996, UP acquired Southern Pacific Lines, expanding its system by over 14,000 miles, and in the process, bringing the eastern and western halves of the nation’s first transcontinental railroad under common ownership. SP arced around the U.S.’s western and southern perimeter from Portland, Ore. to New Orleans, plus the line from Sacramento, Calif. to Ogden, Utah which was the Central Pacific portion of the transcontinental route.

Included in the acquisition were SP subsidiaries Denver & Rio Grande Western and St. Louis Southwestern (Cotton Belt), adding lines from Ogden to Denver, Kansas City, St. Louis and Chicago to the UP system.

The most important commodities on Union Pacific are coal, intermodal trailers and containers, chemicals, and industrial products such as lumber and steel.

UP hauls coal out of Wyoming’s Powder River Basin destined for power plants located primarily in the Southwest and Midwest. Coal from Utah is transported to power plants in Utah and Wyoming and the ports of Los Angeles and Long Beach. Coal also originates from mines in Colorado and Illinois.

UP carries plastics, liquid petroleum, intermediate liquid chemicals, and related commodities out of the chemical producing region along the Gulf of Mexico, from New Orleans west through Houston to Corpus Christi, Texas. Fertilizer also moves from the Gulf Coast, as well as the western U.S. and Canada, to agricultural firms in the West and Midwest.

Unit trains of soda ash originate in Wyoming and California. One third moves west for export, while another third is transported to U.S. glass manufacturers.

Lumber originates from paper mills in the Pacific Northwest and South Central regions of the U.S.

Grain from the Midwest and West moves to domestic customers, Mexico, and ports on the Gulf Coast and in the Pacific Northwest. Corn and soybean grown in the Midwest contribute heavily to the railroad’s agricultural traffic base. Frozen meat and poultry is transported to the West Coast for export. Refrigerated boxcars of fruits, vegetables, and canned goods move in two expedited corridors: from California’s San Joaquin Valley to New York and Boston, and from the Pacific Northwest to Atlanta and Florida.

Two of Union Pacific’s largest customers are Pacer International and General Motors. Pacer stacktrains, begun by American President Lines in 1984, run daily between Chicago and terminals in Southern and Northern California. Another key UP intermodal corridor is Ogden, Utah to Portland, Ore., which sees both Pacer double-stack and UPS trailer trains. Automobiles manufactured at U.S. plants and imports received from Mexico and ports on the West Coast provide a steady stream of auto and auto parts traffic.

Some of the primary commodities on UP’s Portland – Los Angeles I-5 Corridor are southbound loads of lumber from Oregon and northbound loads of consumer products. This corridor also sees coal, potash, finished autos and lumber traveling to and from Canada.

From spokes at Portland, Oakland and Los Angeles, and the East Coast gateways of Chicago, Kansas City, and St. Louis, UP’s main lines join together in a trunk running across the western half of Nebraska.

UP’s triple-track main line between Gibbon and North Platte is the busiest freight railroad in the U.S., with more than 120 trains a day. At North Platte lies Bailey Yard, the largest classification yard in the world.