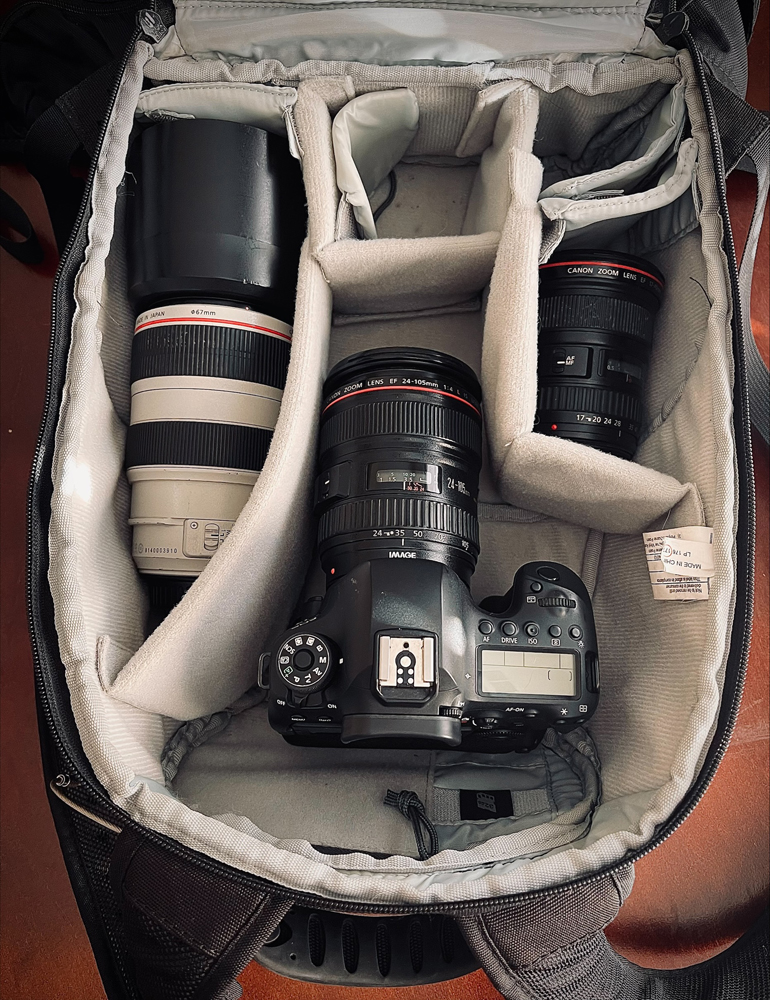 Fifteen years ago, when entering the rail photography scene capturing photos of Norfolk Southern trains switching freight cars on the old West Virginia Secondary in Nitro, W.Va., my resources involved a Kodak EasyShare C433 and a Walmart-bought Case Logic case. The camera’s rectangular dimensions were smaller than today’s smartphones and a quick eBay search determines you can buy one used for $10. That’s certainly less nostalgic than the legacy Pentax, Fujifilm, or Minolta film cameras that my mentors learned with. They’ve weathered the film-to-digital era with poise, and I respect that.

Today’s Lowepro backpack is armed with a few gadgets. I’m a loyal Canon shooter, having migrated to its EOS Digital Single-Lens Reflex cameras more than 12 years ago. Today’s arsenal features the Canon EOS 6D Mark II, a 26.2 megapixel full-frame DSLR. I upgraded to the Mark II from a Canon EOS 6D, and beforehand, the EOS 7D. I still possess all three, but most of today’s work is captured by the Mark II.

I own a more-than-10-year-old Canon 24-105mm f/4L that remains a loyal companion. I am impressed with its sharpness and reliability, and it plays a role in most any day trackside. It’s accompanied by a younger Canon EF 70-300mm f/4-5.6L. It entered the market in November 2010 and has been a part of my collection for close to 10 years. It remains tack-sharp and is a valuable asset, having survived its fair share of abuse over the years. And lastly, the third piece of glass is the Canon 17-40mm f/4L, earmarked mostly for nightscapes involving railroad signals or ultra-wide landscapes.
In addition to these lenses, I keep an Apple iPad handy for studying locations, downloading articles, and keeping notes. It’s equipped with the following must-have iOS-compatible applications that I’ve deemed necessities for what we do:

— The Photographer’s Ephemeris is a map-based sun, moon, and Milky Way calculator that provides you insight into various sun angles at virtually anywhere in the world. It features a desktop and mobile version. This app is more important than any other application I use for photography.

— Maps.Me is a resourceful offline-map that captures more secondary road detail than other GPS or cellular data-based map applications. This application is ranked as the No. 1 offline map, and for that, I have deemed it valuable. You can download a region/state while connected to cellular or Wi-Fi service and then take it with you on your iPad or smartphone when traveling in an area without service.

— For planning trips or multiple locations in a single day, create your own Google Maps by adding push-points to locations and attractions and sync it with your Google Drive account. You can ‘share’ your map with yourself, and others, so that you can systemically cross-off each location as the day progresses. You can also dictate directions to and from certain pushpins, even in the absence of good cell coverage, to find the best route in between photo spots. I’ve found this, and the other apps, to be particularly useful in mountain country.