In the High Desert of New Mexico, a short line hauls freight and passengers.

On the return trip from Lamy, GP16 No. 93 pulls the flatcar and an ex-Great Northern heavyweight coach across New Mexico’s High Desert.
David Lustig
The mixed train – that combination of freight and passenger cars in one consist – used to be a common sight on American railroads. Every road from giant Class Is to small short lines in every part of the country operated mixed trains, plying branch lines and secondary routes where one locomotive and one crew could easily do the work of two.

Like many passenger rail services, mixed trains died out from the American scene almost everywhere in the 1950s and 60s. The operative word here, however, is almost, as a few holdouts can still be found even today.

The view from the open-air flatcar. Three empty boxcars are in the consist of today’s mixed train.
David Lustig
A perfect example is the Santa Fe Southern, an 18.1-mile New Mexico short line, where purchasing a ticket for the sheer joy of riding will provide a look at an America without freeways and billboards.

Small branch on a giant system

Local business interests originally backed the building of this line out of frustration, when the Atchison, Topeka & Santa Fe Railway, looking for the best route through the mountains for its Chicago-California transcontinental route, missed Santa Fe by 18 miles. Understandable to everyone but the town fathers, the easiest climb and descent was far more important than detouring to a town with only marginal revenue potential at best.

Construction quickly began on the shortline, named the New Mexico and Southern Pacific Railroad (no relation to the transcontinental Southern Pacific railroad), in 1878. Two years later, the first train made its way from New Mexico’s capital city down to the Santa Fe Railway interchange at Lamy. Four years after that, unable to sustain itself, the line was leased to the Santa Fe, becoming a short branch line on a giant system until 1992, when it was spun off, again to local businessmen and investors. 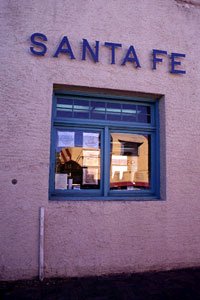 Today’s Santa Fe Southern riders not only get to see glimpses of the High Desert of New Mexico – pretty much just as it was seen by the early pioneers – they also have the opportunity to kick back and simply enjoy a lovely ride.

For rail enthusiasts, there is an added bonus: the ability to observe a working railroad performing its daily chores in the form of a mixed train.

One of SFS’s two yellow and red EMD road-switchers, GP7 No. 92 and GP16 No. 93, will power the train. The freight cars are positioned right behind the engine, followed obediently by the passenger coaches – an eclectic mix of modern streamlined cars and older heavyweights, depending on passenger counts. There’s even a customized flatcar with a safety railing for those who want to ride out in the open and enjoy the fresh air.

After spotting freight cars on the BNSF interchange track, the mixed train idles at the Lamy, N.M. depot while passengers and crew detrain for lunch.
David Lustig
After a mid-morning departure from SFS’s mission-style station on Guadalupe Street in Santa Fe, passengers can watch as their train moves through the industrialized sections of the city. The locomotive will cut off and switch cars at various industries as needed.

Depending on which customers need to be switched – all are in and around the capital – the train may work Premier Distributing, dropping off carloads of beer; Hope Lumber Supply, a transloading operation (the actual industrial site is elsewhere, the freight car will be spotted on a siding and the material transferred to a truck); flatcars of oil and gas pipe for Ipsco Tubulars, another transload customer; and landscaping material for Cameron Ashley. Once in a while, the railroad will get the call to move flatcars loaded with bulldozers, tanks, and Humvee’s for the New Mexico National Guard.

Once outside city limits, the panorama quickly changes from manmade to some of nature’s finest scenery. Houses you just don’t get a chance to see on the Interstate come and go, and riders all of a sudden realize they are taking deep breaths of fresh, clean air. The train’s speed is leisurely, and the atmosphere is friendly and carefree. Children and adults gaze at the landscape, pointing out the occasional wild animal somewhere in the distance. On the open-air flatcar, riders point cameras and binoculars at the passing scenery, while enjoying the cool breeze generated by the moving train.

The trip takes about 90 minutes. Arriving at the historic hamlet of Lamy, where the Santa Fe Southern interchanges with the BNSF Railway, riders can disembark, and have the option of purchasing a reasonably priced meal brought in by a caterer.

After the railroad crew switches out the freight cars they brought down from Santa Fe and assembles the inbounds for the trip back home, the entire process is reversed. Any scenery you missed the first time, you’ll be able to check out on the way back.

The arrival back in Santa Fe, 90 minutes later, is almost anti-climatic. Many riders wish the trip would have lasted just a little bit longer. The entire adventure takes about 4 ½ hours.

Santa Fe Southern’s mixed train, known as the Scenic Day Train, runs throughout the year, but not always every day, so call first before trekking there. The railroad also operates a variety of special trains during holiday periods and the summer season, including some that run in the late afternoon and evening.

Remember that the train does not run every day, so call first. The telephone numbers are (505) 989-8600 or toll-free (888) 989-8600. You can also check their web site, www.sfsr.com, which is full of useful information including directions, fares, and various trip options.

Bring along some film or videotape, perhaps a pair of binoculars, and most important, a sense of adventure.

One thought on “Mixed train from Santa Fe”