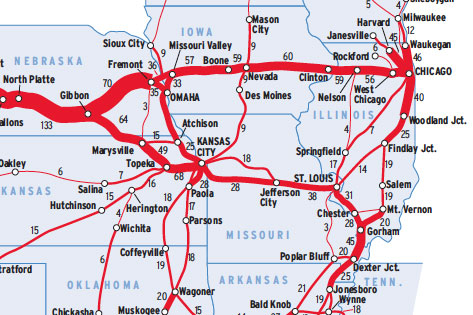 This Map of the Month was featured in the November 2001 issue of Trains magazine.

Train frequency per 24 hours on the vast Union Pacific system, in first quarter 2001, is revealing both for what is indicated and what is not.

Consider, if you will, the pre-1982 Union Pacific, i.e., before merger mania. With just a couple of exceptions, what are today’s stronger lines? Those of the original UP, including the route to Portland, Ore., and the old Los Angeles & Salt Lake. The exceptions? One is the former Chicago & North Western portion of the Overland Route to Chicago, UP’s primary feeder after 1980, when the woebegone Rock Island folded (UP made things official and acquired C&NW in 1995). The other: Missouri Pacific’s two main routes from St. Louis, to Kansas City and Texas. UP bought MP in 1982.

Two trends stand out: East-west traffic still overwhelms north-south, and the former Southern Pacific is still comparatively weak except for the Sunset Route west of El Paso. The Sunset, like most of the Chicago-Oakland Overland Route and some of the old MoPac, is heavy on intermodal. MP around Houston and in Arkansas is also heavy with chemicals.

Daily train frequencies, detailed by small numbers where space allows, include all trains: UP freights, Amtrak and commuter (hence the large volume on the Chicago Metra Northwest and North lines), and freights of other railroads, be they line tenant or owner.

But when another road’s heavy volume skews a train count, the line is not shown. Examples include the Powder River Basin line north of Shawnee Junction, Wyo., where UP joins Burlington Northern Santa Fe to jointly serve the mines, and UP’s trackage-rights routes to Superior, Wis., over Wisconsin Central and BNSF. Many branches, even profitable and upgraded ones such as the northwestern Iowa cluster, also aren’t shown.

Nevertheless, the map is a revealing illustration of what Union Pacific is today… and also what it can become.