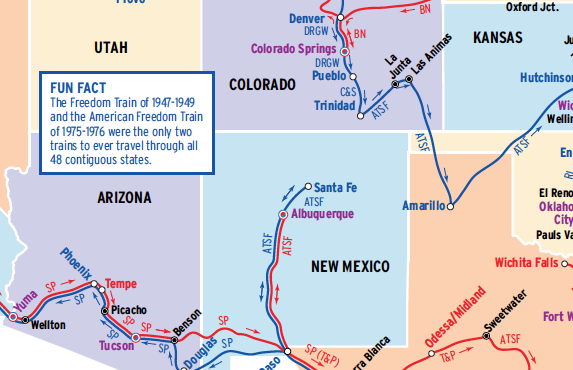 As part of America’s bicentennial celebration, the American Freedom Train spent 21 months touring the country, displaying 500 artifacts of the nation’s history — ranging from George Washington’s copy of the Constitution to a moon rock — to more than 7 million visitors in 48 states. That journey, celebrating its 40th anniversary in 2016, was the successor to a train that toured the nation with 126 historic documents for 29 months beginning in September 1947. Powered by an Alco PA locomotive, the original Freedom Train traveled over 37,000 miles on more than 50 railroads, and had more than 3 million visitors. Using documents in the Trains archives, online records, and information from those involved in the 1975-76 effort, we’ve reconstructed the routes of both trains. If you think they’re hard to follow, imagine planning them.
Success, start your free download!
Download the map PDF

15 thoughts on “Routes of the Freedom Trains”