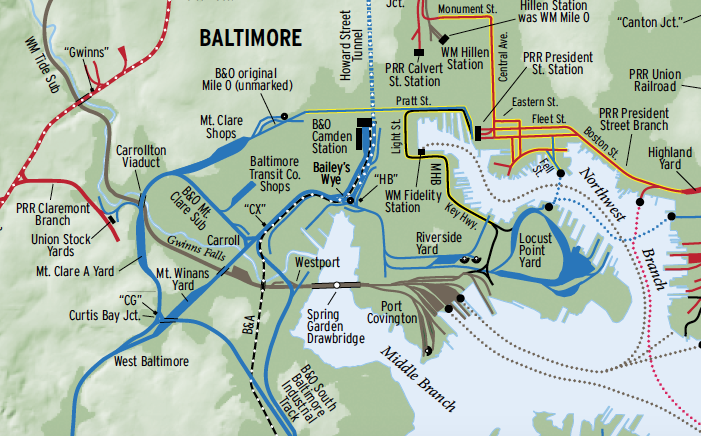 It was an act of sheer audacity that made Baltimore the cradle of American railroading. Baltimore’s topography of hills broken by short, steep valleys was exactly wrong for a canal, and the city’s outlet to the west, the National Road, was expensive and slow. So city leaders proposed a railroad, the Baltimore & Ohio, to run more than 350 miles to the Ohio River, the first common carrier railroad in the country, at a time when the longest railroad in the U.S. was less than 10 miles long.

The B&O began building west from Baltimore in 1828, and invented the American railroad as it went along. The builders didn’t always get it right the first time, either. To reach Baltimore’s docks, the B&O built tracks in the street. A year later, the Baltimore & Susquehanna (later the Northern Central, a Pennsylvania Railroad predecessor) also started in the street on its way north to Pennsylvania. The Philadelphia, Wilmington & Baltimore, another PRR forerunner, came in from the northeast, also ending in the streets at the docks. The result was an operating nightmare.

Pennsylvania was the first to break the gridlock by buying the franchise of the Baltimore & Potomac, which was chartered to run from Baltimore to Popes Creek, Md. Over B&O’s loud protests, PRR built a “branch” to Washington, D.C., arriving in 1872 and ending the B&O’s monopoly on the Washington trade. (That same year, the Western Maryland reached Hagerstown, Md., on its way to becoming a B&O competitor for western trade.) Another PRR subsidiary, the Union Railroad, built a series of tunnels north and west of town that neatly connected its lines to Philadelphia, Harrisburg, and Washington.

Baltimore & Ohio, stuck with an unwieldy arrangement of trackage rights, street running, and carferries, built its own line to Philadelphia in 1886, and improved its situation markedly in 1895 with the opening of the Baltimore Belt Line from Bayview to Curtis Bay Junction. The line connected B&O’s routes by way of the 1.4-mile Howard Street Tunnel, through which steam-powered trains were towed by electric locomotives, the first in the country.

Ironically, Baltimore’s railroad tunnels, which helped eradicate the city’s railroad gridlock in the 19th century, have now become choke points on today’s Amtrak and CSX Transportation main lines. Both railroads have long-term plans to replace all of the city’s tunnels.