We plot the journeys of four freight cars as they cross half a continent. 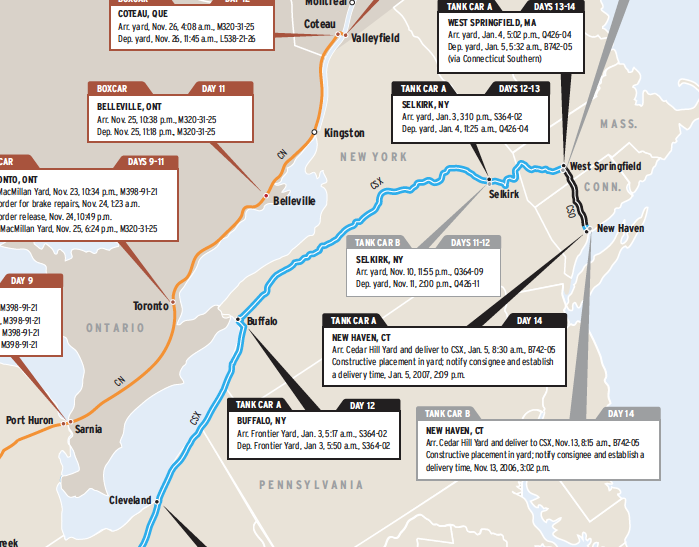 This map shows how four freight cars, threading their way through the North American railroad network, can take about two weeks to cross half the continent. The shippers using these four cars enjoyed tremendous efficiencies by sharing the costs of train crews and locomotives, track and signaling, classification yards, and overhead expenses with the other 1.5 million freight cars in the North American fleet. That’s why railroads can deliver products at a much lower cost than trucks. It’s also why motor carriers continue to have the speed advantage over carload freight.

The journeys made by these cars include events common to most merchandise freight shipments (such as yard classifications, and stops made to add or drop cars) as well as unusual occurrences (namely, bad order car repairs made en route, and travel over the Christmas and New Year’s holidays). The sampling, however, is anything but scientific. We can’t draw any specific conclusions about how railroads move cars based on these trips.

Similarities among the four journeys do appear. (The trips were measured from “Day 1,” the day the car was pulled from the customer.) The cars typically moved about 300 miles or less in a day, although Tank Car A covered distances of around 600 and 700 miles in two separate 24-hour periods. On three consecutive days, Canadian National and Union Pacific moved a boxcar 350-400 miles per day.

The coordination of run-through traffic was swift at Salem, Ill., where UP handed trains over to CSX and CN; no train sat for more than 22 minutes. Travel through major yards or gateway cities typically took one to two days (not counting time for repairs).

The four cars were idle between 56 percent and 72 percent of their total transit time. Still, CN got a boxcar through Chicago in less than 5 hours, and CSX classified a tank car at its Avon, Ind., hump yard in just 10 hours.

There are many variables in a network as large and complex as North America’s railroads. Witness the two tank cars with identical origins and destinations, but taking different routes. Their trip plans were likely determined based on factors in place when their journeys began, such as holidays, yard congestion, and track maintenance curfews.

Ultimately, these trips illustrate the challenges railroads face handling carload freight. Unit trains of 100-plus coal cars and up to 280 double-stacked containers are incredibly efficient — covering long distances at speeds of 70 mph or faster. Not so for today’s railroad workhorse, the single freight car. (Source of car trip data: AllTranstek LLC)

This map originally appeared in the July 2007 issue of Trains magazine.