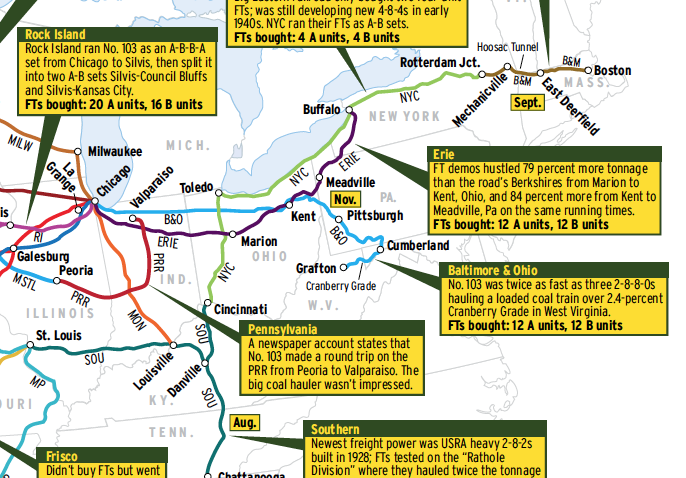 Seventy-five years ago on Nov. 25, 1939, Electro-Motive Corp.’s FT demonstrator diesel locomotive No. 103 left its birthplace at the company’s La Grange, Ill., plant. Nobody, not even its builders, knew what the new creation could do. True, the 17-year-old Electro-Motive had been a pioneer in diesel propulsion for railroad use, having built a successful line of self-propelled passenger cars (doodlebugs), diesel switchers, and diesel passenger locomotives. But the new FT would make the company’s fortunes soar. No. 103 became the prototype for, in the words of Trains Editor David P. Morgan, the world’s first standardized, mass-produced line of diesel freight locomotives with “no equal in railroading.” The tour was more experiment than demonstration. The builder’s tone was, “We’d like you to help us find out just what we’ve got here.” They learned that the locomotive not only could pull record tonnage in record time while using half the fuel of a steam locomotive but it also needed minimal maintenance and had excellent reliability in all kinds of weather. It was equally adept at hauling passengers as it was freight. By the time the FT returned to La Grange in October 1940, 83,764 miles later, the diesel locomotive revolution had begun its meteoric rise. Sixteen of the railroads that hosted the FTs ordered them as soon as possible after the tour. Many roads on the trip that didn’t buy FTs later became big EMC customers; based on the tests, eight other railroads bought FTs for a total of 1,096 units. By 1947 the now-Electro-Motive Division of General Motors was cranking out four to six diesel locomotives a day. It’s appropriate in this 75th anniversary year of that fateful tour that the original FT, No. 103, is still with us. After a career of lugging freight on Southern Railway, No. 103 was donated in the early 1960s to the Museum of Transportation in St. Louis. The locomotive, “the diesel that did it,” took a place of honor during this year’s “Streamliners at Spencer” festival, celebrating the sleek, smooth look of early American diesel locomotives. Norfolk Southern is repainting the unit at its shop in Chattanooga, Tenn., before returning it to the museum St. Louis. No. 103 is a prized artifact in the history of American railroad technology, one of the true forces of technological change.
Success, start your free download!
Download the map PDF