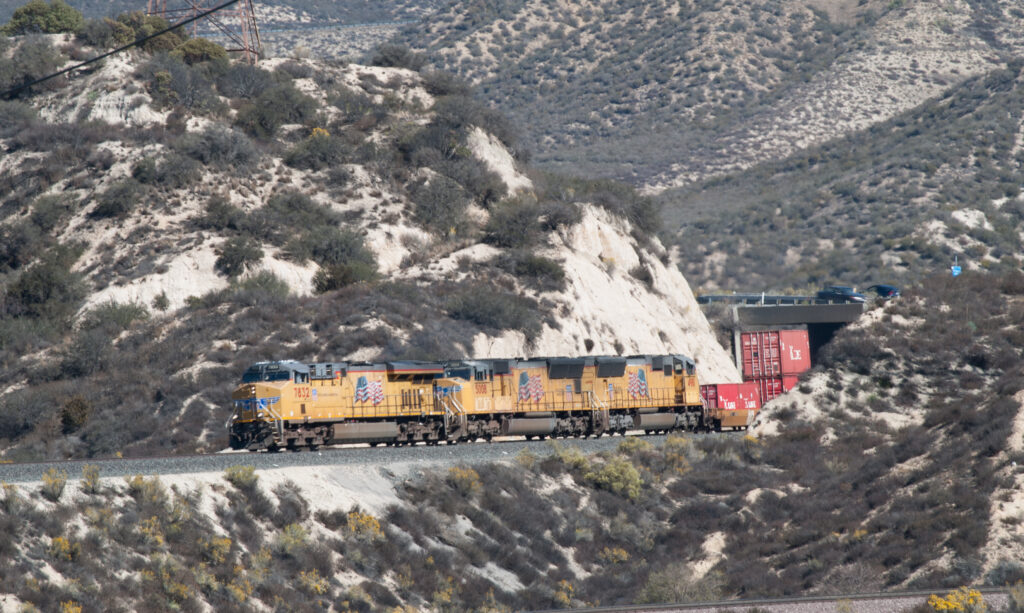 But before he explained those items, Iden wanted to include a dictionary definition of the word “enhancement”:

Enhancement means “To increase or improve in value, quality, desirability, or attractiveness…” — From Merriam-Webster.com

Crashworthiness has been discussed since diesel locomotives were first introduced. Most of them today put the crew at the very front. “When you’re going to have a collision, that’s the first part of the locomotive that’s going to be affected,” Iden said.

Crashworthiness — the ability for a locomotive cab to survive a collision and protect a crew from serious injury or death, has steadily gained ground over decades. In 1995 the Association of American Railroads’ adopted standard S-506 that focused mostly on bolstering locomotive cab noses.

“It essentially had to do with making the nose structure out of thicker, tougher steel so that in the event of a head-on collision … (it) provides some sheltering relief for the operator cab behind the nose.”

“Improved crashworthiness has had the biggest impact on injuries and fortunately, it’s reduced the occasional fatality of occupants of the cab. It’s also made the fuel tanks more resistant to crush and rupture, which reduces the risk of spills – an environmental problem – but also fuel fire.”

No. 2 — Alerters and event recorders

An event recorder is referred to commonly in the news media as a black box, just like the flight data recorder on an airplane. It records the operating data of the locomotive, including speed, throttle setting, air brake commands, headlight settings, and more. It’s an important part of accident evaluation to see how was the train being operated prior to the incident.

“It’s also being used for what I call ‘rules enforcement,’ to make sure that the trains are being operated according to the operating rules and the regulations,” Iden said.

Alerters were first required by the Federal Railroad Administration in 2013. These are devices that monitor changes in various controls like the throttle, air brake, horn to make sure that when the train is moving the engineer hasn’t fallen asleep. The faster the train goes, the shorter the monitoring period.

“I think the best way to put it is that if you’re if your locomotive is operating at about 70 miles an hour, it’s looking for some change in controls once every roughly 20 seconds,” he said.

Whether the engineer is blowing the horn, adjust the throttle, braking, or pushing the acknowledgment button on the alerter, there’s some evidence the crew is awake.

Exhaust, or emissions regulations that cover locomotives in the United States are set by the Environmental Protection Agency. Automobiles and trucks adhere to similar standards.

“We’ve gone up now through the fifth level, which is called Tier 4 for new locomotives, which was effective January 1, 2015,” Iden said.

It has been progressively reducing the emissions coming from diesel locomotives, including particulate matter and nitrous oxides.

The latter are nitrogen-oxygen compounds that are precursors to smog, which is particularly dangerous for people with respiratory issues like asthma.

No. 4 — Toilets and air conditioning

Prior to 1971, there was no government mandate for toilets on locomotives. Despite that, most diesels – particularly EMD’s E and F carbody models, were so equipped.

Early road-switchers like the GP7, RS3, and others had toilets in the nose called a “dry hopper.”

“It looked like a toilet sheet made out of sheet metal and it was dry. It didn’t even flush,” Iden said. “Without getting into the nasty details here … they released waste onto the track.”

The federal government decreed that locomotives built after March 31, 1971, and all engines by 1974 had to have toilets that prevented the discharge of untreated waste onto the track.

The retention toilet law helped keep waste off tracks in the countryside and through cities — except for Amtrak. The national passenger carrier was exempt from having to comply with the law for a time because of all the old heritage equipment it was using. Moreover it had to maintain it on a limited budget.

Amtrak is now also required to comply with the law.

There’s also a law that says they have to be cleaned.

The law reads, essentially, that if a locomotive has a defective or unsanitary toilet, it can’t be used as the lead locomotive. Yard locomotives are excepted; their crews are supposed to have access to toilets or porta-potties throughout the yard.

As for air conditioning, the first ones appeared on the Southern Pacific or Santa Fe. They were rooftop models.

It wasn’t until 2012 that the FRA published a regulation requiring air conditioning on new locomotives starting that year. There’s also a requirement to retrofit older locomotives.

Each locomotive or remanufactured locomotive either ordered or placed in service around 2012 has to have an air conditioning unit for the operator cab. It doesn’t say, however, that you have to be able to cool the cab down to 70 degrees.

“It says it has to be an operating air conditioner. The problem is most locomotive cabs are only about six feet long and nine feet wide and about seven feet high. It’s like a small room in a house. But typically, you’ll have about a two-ton air conditioner, which is enough for a modest-sized home.”

The problem is all the glass. It’s difficult to air condition a locomotive cab like your office or your home kitchen.

Air conditioning is “… important particularly when you operate in hot climates and particularly as the average temperatures globally and across the country are going to be increasing.”

Dynamic brakes were first put on a diesel-electric locomotive starting with the FT units delivered to the Santa Fe in 1940. It delivers slowing power by converting traction motors into generators and letting the excess electricity burn off as heat through the cooling grids.

“The way it works is, as I increase the resistance in the dynamic brake grids, it increases the torque on the motor which acts to slow down the train,” Iden said.

Dynamic brake grids are typically cooled with fans so that they don’t glow like a toaster, but it sometimes happens. If a fan breaks and grid overheats, the system can fail.

“The reason I’m including ‘improved dynamic brakes’ as an enhancement is that the railroads in the 1950s and 60s, and even into the 70s were in mixed camps,” he said.

“In the past, what would have happened … I don’t mean to call out individual roads, but I mean, you know, even in the in the ‘old days,’ the Milwaukee Road, the Chicago & North Western, the Rock (Island) … if the dynamic brakes failed on a locomotive, they would leave them failed.”

The FRA now requires if a locomotive is equipped with dynamic brakes, they have to be operable. If they aren’t, a railroad can’t lead a train with that unit.

Overall though, even the usefulness of dynamic brakes has improved.

Iden said there were some railroads that believed in dynamic braking and maintained them. In fact, Southern Railway required engineers to always use dynamic braking first when making a planned slowdown or stop. That helped save fuel and keep the train stretched out.

Today’s A.C. traction motors are even better than their older D.C. counterparts. “You can almost stop a train in many cases with dynamic brakes on A.C. locomotives.”

Also improved are the grid and resistor elements, as well as the fans. Of course, better maintenance on the part of the railroads also helps.

No. 6 Alignment-control couplers and draft gear

Alignment control essentially keeps a pair of locomotives in line with the track when you go into a heavy dynamic brake situation, where the locomotives are now pushing back against the train. Prior to alignment control, what would happen is the two couplers would tend to swing to one side or the other, increasing the risk of what’s called a “jackknife” derailment.

New road locomotives  since the 1970s have been equipped with alignment control. It is not a regulatory requirement, nor is it an AAR standard or recommended practice. It’s kind of a voluntary standard by the builders.

“It’s important because as trains have gotten heavier and as railroads increasingly use dynamic braking to control speed or slow the trains, you tend to put more and more buffer force (on the couplers).”