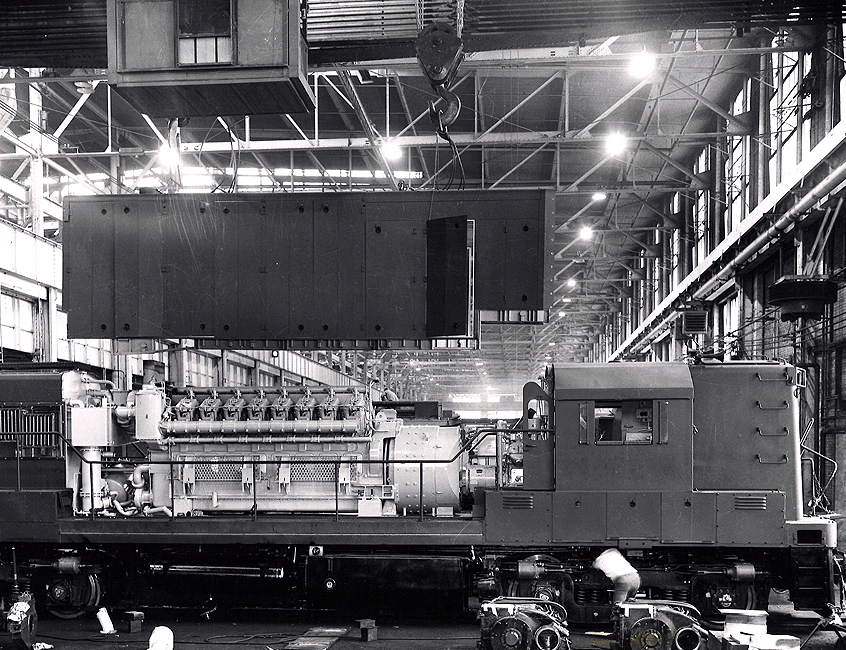 The top 3 diesel prime movers will be instantly recognizable to long-time readers of Trains magazine and its Locomotive special issues. But where do they rank? Well, that’s Mike Iden’s call.

Iden spoke with Trains.com in June 2022 to assess his choice for the top spots. Here’s an edited version of that conversation.

“The first U25 production units were delivered in 1961. The initial U25B railroad customers (Frisco, Santa Fe, Union Pacific and Wabash) actually bought the first 42 engines and the locomotives separately. The railroads ordered and paid for those engines through Cooper-Bessemer and they paid GE for the locomotive minus the engines, and then GE installed the Cooper-Bessemer engines.”

Iden says the 7FDL originated with one man, James Chrisman Rhoads, a GE employee and engineering manager at the locomotive shops in Erie, Pa. Rhoads helped convince the one-time manufacturing behemoth that to be competitive and break away from selling heavier and heavier switching locomotives to countries like Brazil, GE needed to have its own engine to power its destiny. Rhoads also had a personal vision of GE becoming a domestic supplier to American railroads. And that vision lead GE to have what would become one of the top 3 diesel prime movers.

Rhoads found the “right diesel engine” in the Cooper FV series of engines. It would be the modified Cooper-Bessemer FVDL-16-T that would be placed in the first of GE’s U25B locomotives. In Cooper’s nomenclature, “F” engines had 9” cylinder bores, “V” meant a “vee” configuration, “D” meant diesel (Cooper also made natural gas engines) and “L” implied a locomotive application. After GE acquired manufacturing rights, the engine became known as the 7FDL, with “7” being GE-speak for locomotive equipment.

“And then starting in late 1961 GE started building the Cooper-Bessemer design, which is the 7FDL. And the reason I include that if you go from 1960 when it was first introduced in the 16-cylinder version as 2,500 horsepower.”

Though not sold for domestic markets, the 7FDL continues in new production by Wabtec (which now owns the former GE locomotive operation) for overseas customers that request it. Wabtec also rebuilds older 7FDL engines for railroad and marine customers.

“So you have an engine that had the growth capability to go from 2,400 to 4,400 traction horsepower, which I think is an 85% growth…” using the same basic design (but clearly upgraded through hundreds of individual component redesigns over decades of manufacturing).

“It’s the engine that launched GE into the locomotive market. And it’s also the engine that powered GE ahead of EMD starting in 1980. I think it was 1981 when GE sales eclipsed EMD and with the exception of I think one year after that, GE has outsold EMD every year up until the last two years where neither one has sold any new locomotives of any number.”

“The reason for that is the 567 was really introduced in quantity starting in 1939 when the first FT was sent out on its demonstration trip, and it was the 567 that basically took the (predecessor engine Winton) 201A’s design defects and weaknesses more or less designed out for mass production and for better durability.”

Iden relates a story about the Winton 201A engines, two of which powered a full automotive assembly line for General Motors’ 1939 World’s Fair. After hours, crews would tear apart and rebuild the engines each night so they would reliably produce electricity the next day. Apparently, the only component that didn’t fail was the dipstick to check the oil.

“The 567 was GM and Electro-Motive’s response, if you will, to fixing the inherent flaws of the 201A. The reason I’m including the 567 is it was first commercially successful two-stroke cycle production locomotive engine, and it begat the 645 engine family and then the 710 engine.

“It was the 567 that was the backbone of the EMD product line. That led to its supreme control of the U.S. locomotive market and ascendance in the first wave of dieselization from 1940 to 1960. Without the 567 engine, EMD probably never would have been the market leader. The 567 engine was a relatively simpler engine to maintain compared to the competition, which were the Alco 539 the 241 and then in starting in 1954, the 251 engine” — all four-stroke cycle engines that require more parts and endure higher stresses compared to two-stroke engines like the 567.

And why is this humble, early engine the top of the top 3 diesel prime movers? Without it, Iden says, EMD wouldn’t have built the 567, 645, and 710 engines. There would have been no 567 powering the FT — the famed locomotive that pushed railroads to scrap steam in favor of diesel-electric propulsion. And who knows what motive power development might have looked like without the 201A?

But there’s more about the engine itself, that set it apart. “It was the first light, lighter-weight diesel engine that had respectable power output without being excessively heavy. I think one of the biggest problems for early dieselization was the fact that in the early Alco, GE, and Ingersoll-Rand boxcabs, you have this huge engine that barely got out of its channel, so to speak, and it only produced 600, 900 horsepower.

“The Winton 201A had a number of novel design features, one of which was a steel weldment. The design of the crankcase became the design in the EMD 567, 645, and 710 two-stroke cycle engines. That basic design was conceived by Lukens Steel. It was an Eastern company, and they specialized in weldments. And so instead of this large, cast iron, heavy, mainframe casting, we had this relatively lightweight engine backbone in which you could assemble, the engine, the crankshaft, and the power assemblies.

The 201A “had a number of unique features. And without that going back to why, without the 201A, the 567 never would have existed, that means the 645 and the 710 would never have existed. So the 201A is what facilitated the real development maturity of a two-stroke cycle diesel engine for diesel-electric locomotives.”

That is the scoop on the top 3 diesel prime movers in history.

Do you agree, disagree? Leave your opinion in the comments section below!

4 thoughts on “Top 3 diesel prime movers of all time”