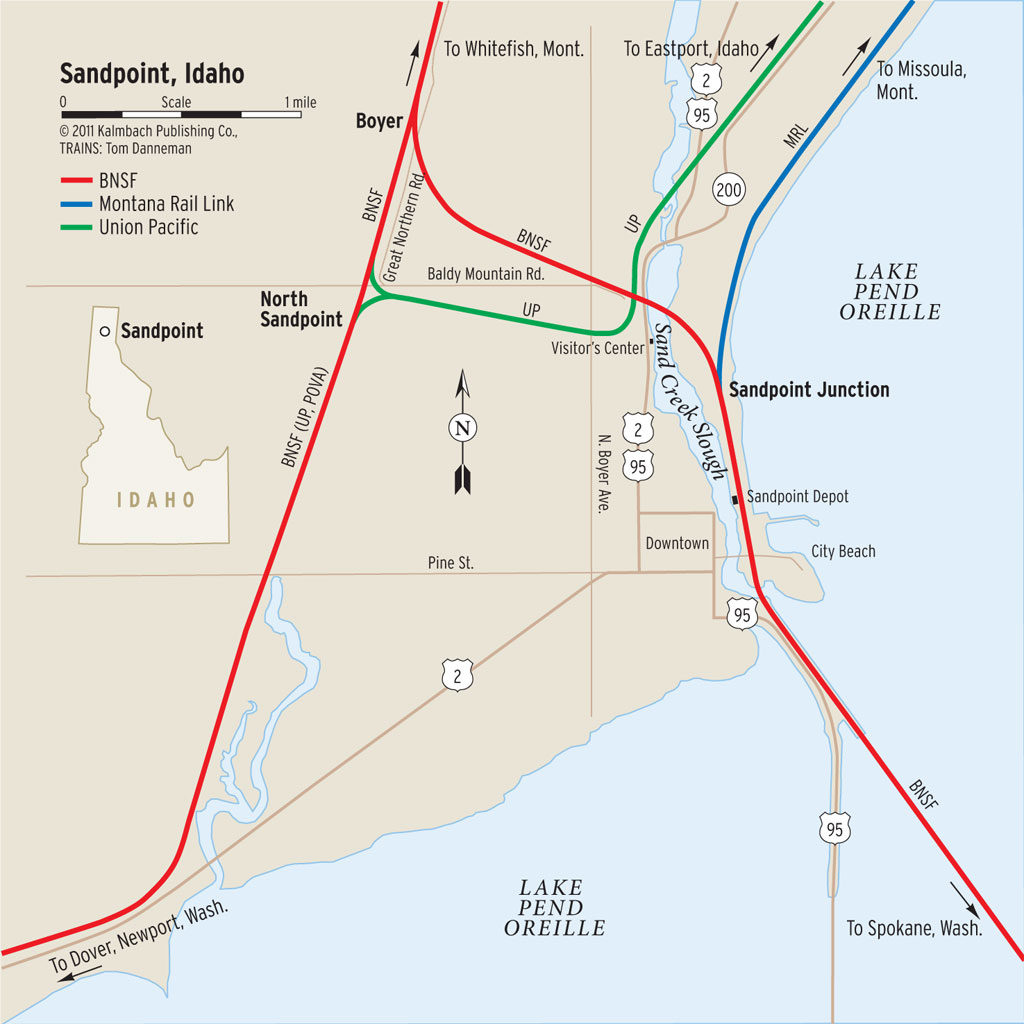 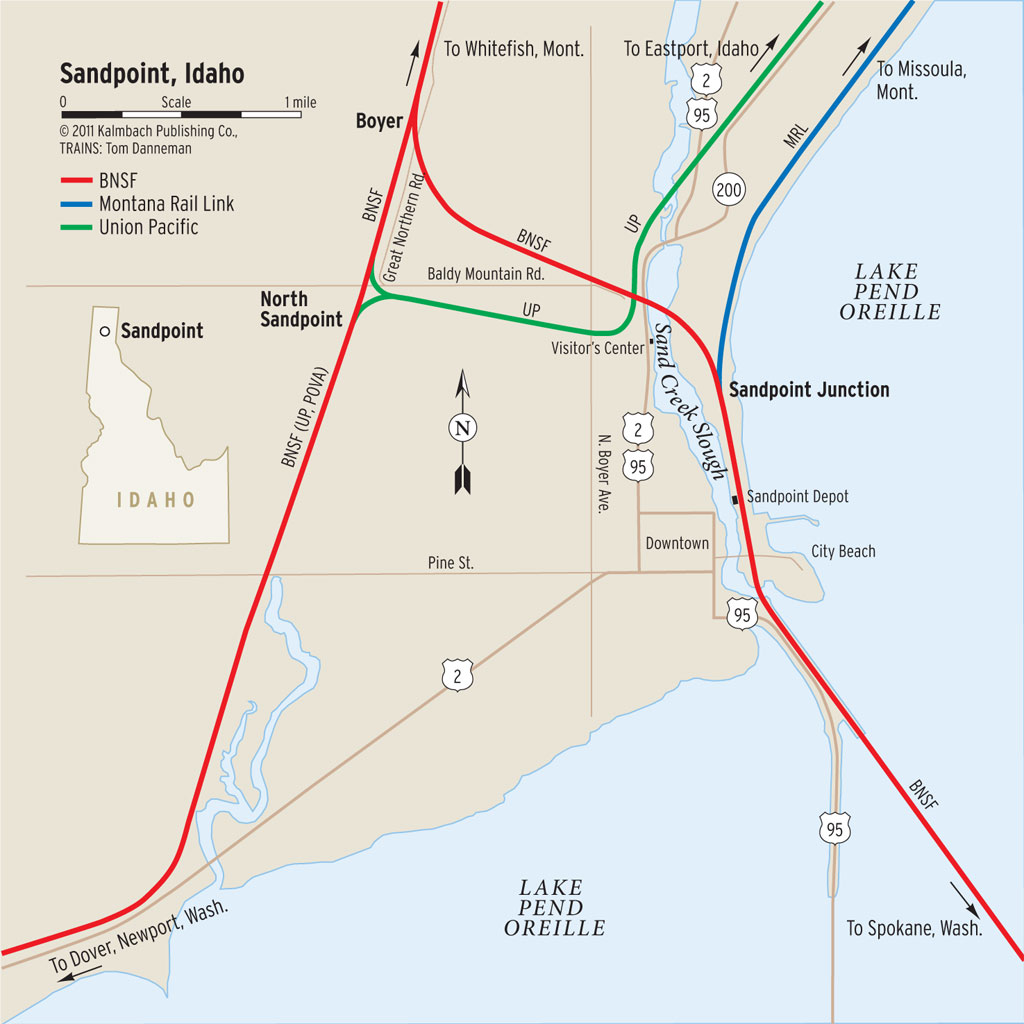 Sandpoint, Idaho, is near Lake Pend Oreille (pronounced “pond oray”) in Idaho’s Panhandle. Sandpoint features the main line of BNSF’s Kootenai River Subdivision, the busy northern transcontinental route, as well as Union Pacific’s Spokane Subdivision from Eastport, Idaho. UP trains to and from Eastport use trackage rights on BNSF’s Newport Subdivision from North Sandpoint (where UP trackage ends) west to Dover; UP dispatches the line. Amtrak’s Empire Builder stops nightly in both directions on its journey between Chicago and Portland, Ore./Seattle. Sandpoint Junction, near the depot, is where Montana Rail Link’s 4th Subdivision from Missoula, Mont., joins the BNSF main, thus the nickname “the funnel.” MRL has trackage rights on BNSF to Spokane, short line Pend Oreille Valley operates from Newport, Wash., to Dover, Idaho, and then east on BNSF’s Newport Sub to Boyer Yard. The Kootenai River Sub usually hosts more than 40 trains a day.

The biggest attraction is BNSF’s massive bridge over Lake Pend Oreille. Viewing areas for the bridge can be found off of Bottle Bay Road, which can be reached from Highway 95 south of town, or from the sidewalk/bike path along Highway 95 as it leaves town to the south. The BNSF bridge across Sand Creek Slough can be seen from a visitors center off of Highway 2/95 just north of downtown. UP can be viewed along highway 200 north of town, or at numerous grade crossings in town. A cool steel and concrete trestle is visible from Highway 2/95 right after Highway 200 splits off toward the east. The Sand Creek Byway construction project is seemingly perpetual, so you can expect less-than-great ambiance and construction delays near downtown Sandpoint.

Both BNSF and UP have small yards in Sandpoint. Boyer Yard, BNSF’s main switching yard, is located near Sandpoint’s airport on the city’s northwest side. The Pend Oreille Valley interchanges with the BNSF at Boyer. UP’s small yard is located along Highway 200 on the north end of town just north of the BNSF/UP diamond.

Sandpoint is a thriving arts community and a tourist hot spot. Downtown Sandpoint has fine restaurants and places to shop. Schweitzer Mountain Resort, located 11 miles from Sandpoint, is a great place to ski, hike, and mountain-bike. Lake Pend Oreille offers water sports and, of course, beach time. Sandpoint’s City Beach is within sight of BNSF’s main line. Silverwood Theme Park, the Northwest’s largest, is only 26 miles south of Sandpoint near Athol. 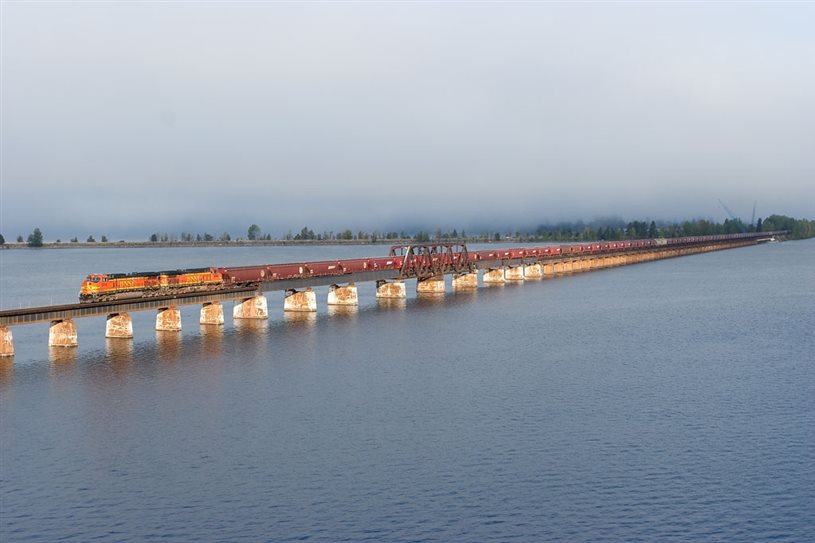