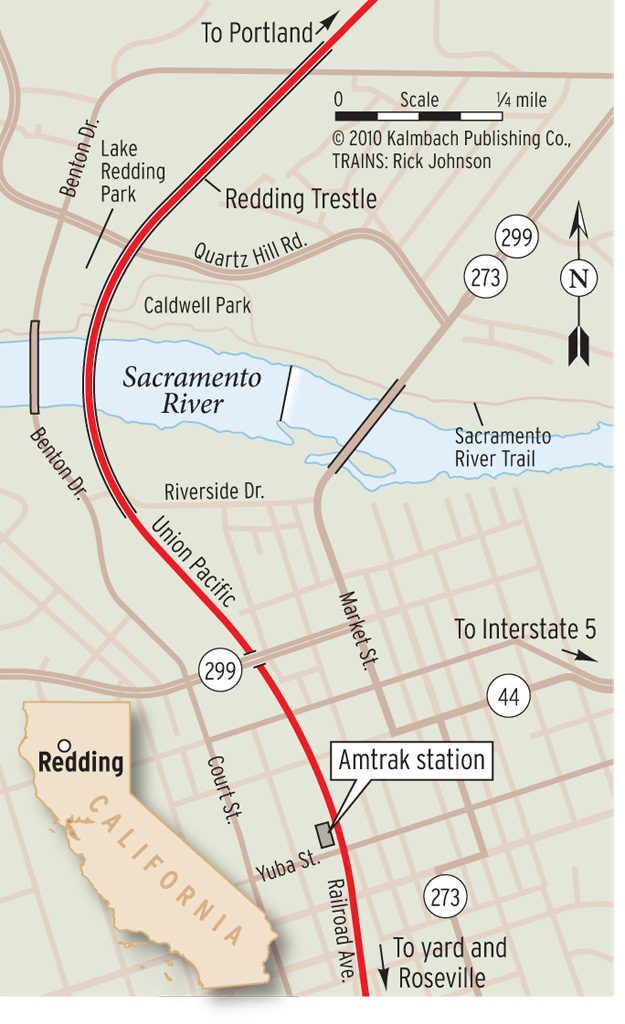 In Redding, Calif., California Highway 273 (old Hwy. 99) lets you follow the action on Union Pacific Railroad’s north-south I-5 corridor. The former Southern Pacific main line through the area is now part of UP’s Valley Subdivision, from Dunsmuir at milepost 321.4 to East Roseville at milepost 106.4. Photographers will love the climate: Redding has an average possible sunshine of 88 percent per year, the second-highest percentage in the United States. While you’re there, don’t miss UP’s Redding Trestle. Built in 1939, this nearly three-quarter-mile-long landmark spans the Sacramento River and offers fantastic views of the river canyon, Shasta Bally Mountain, and Mount Lassen in the background. The trestle, a Warren deck truss bridge, not only soars 110 feet over the river, but also over a nine-hole golf course and part of a residential neighborhood! Train frequency, before the recession lowered traffic, was 16 freight trains a day plus two Amtrak Coast Starlight passenger trains: southbound No. 11, scheduled to depart Redding at 2:21 a.m., and No. 14, scheduled for 3:14 a.m. Freights range from hot “Z” container/stack trains pulling United Parcel Service and FedEx trailers to loaded lumber trains heading south. The Redding local, based at the downtown depot, runs two shifts each day and draws a pair of GP60s. GP60s also power the Roseville to Redding turn, a Tuesday, Thursday, and Saturday departure from Redding that serves local customers along this important route.

TRAIN WATCHING
From the aptly named Railroad Avenue, you can watch the Redding local build its train. A great place to watch the local switching is next to Bill Sturges’ Train Depot, 2354 Railroad Avenue (530-243-1360), also a great source for local information. If traveling north on Interstate 5, exit at Anderson, 10 miles south of Redding and parallel the main line into the city limits. You’ll enter Redding at Girvan siding, often used for meets. Turn left onto Buenaventura Boulevard, and then right onto Railroad Avenue. Upon reaching the end of Railroad Avenue, a short left-right jog around the post office will lead you to the historic 1923 stone and stucco Amtrak station on Yuba Street. To reach Redding Trestle, take Yuba Street west and turn right onto Court Street (which becomes Benton Drive), continuing north until the trestle appears on your right. A series of right turns will take you around the trestle on Quartz Hill Road through Lake Redding and Caldwell parks, then Market Street, and then Riverside Drive. The trestle’s north-south configuration makes it ideal for early morning and late day photography. The Lake Redding-Caldwell Park area has fishing, picnic tables, a boat launch, and is a great staging area for hiking or biking the Sacramento River Trail system. 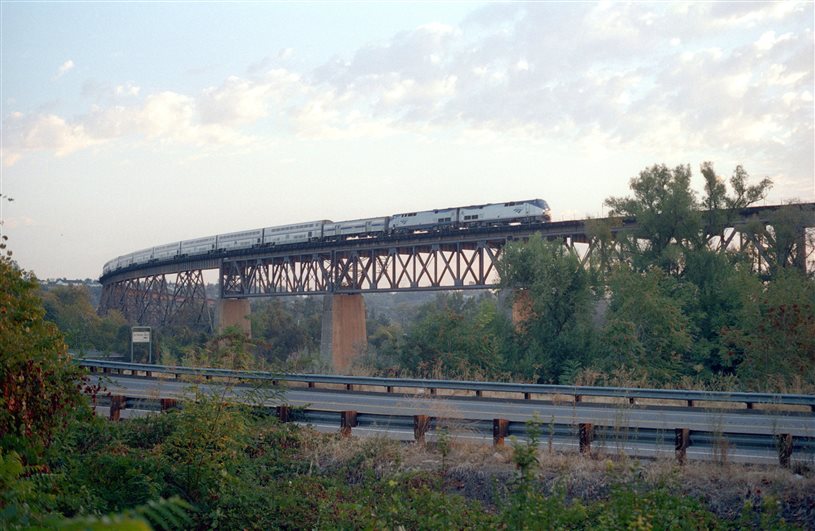 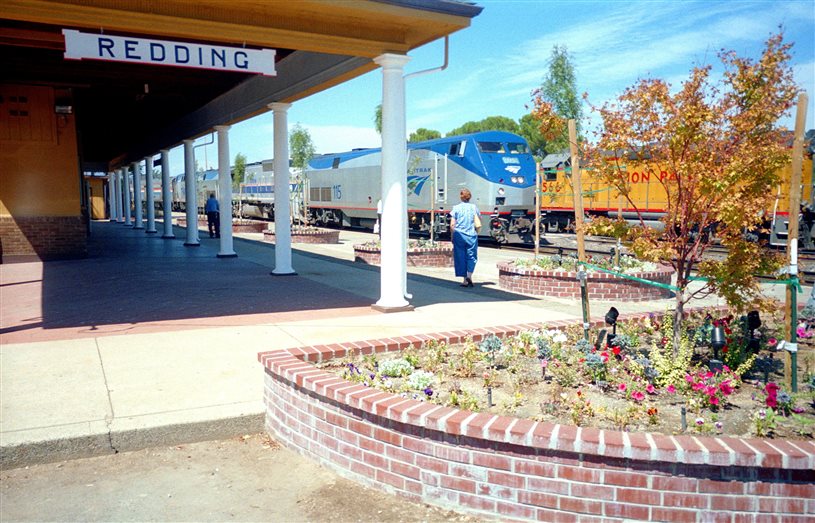 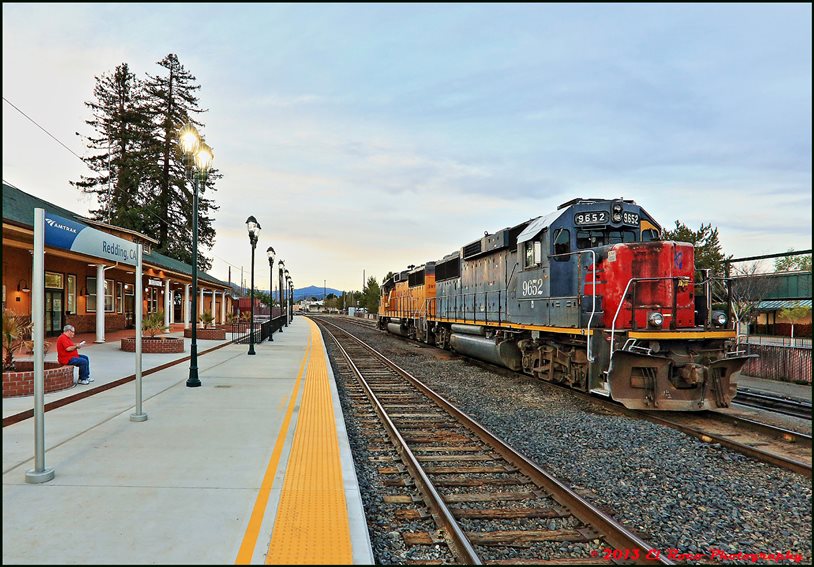 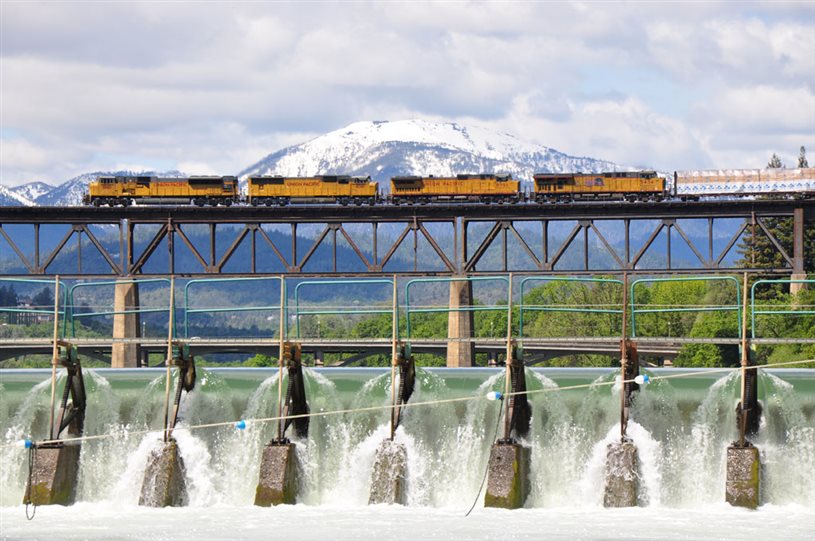 One thought on “Redding, California”