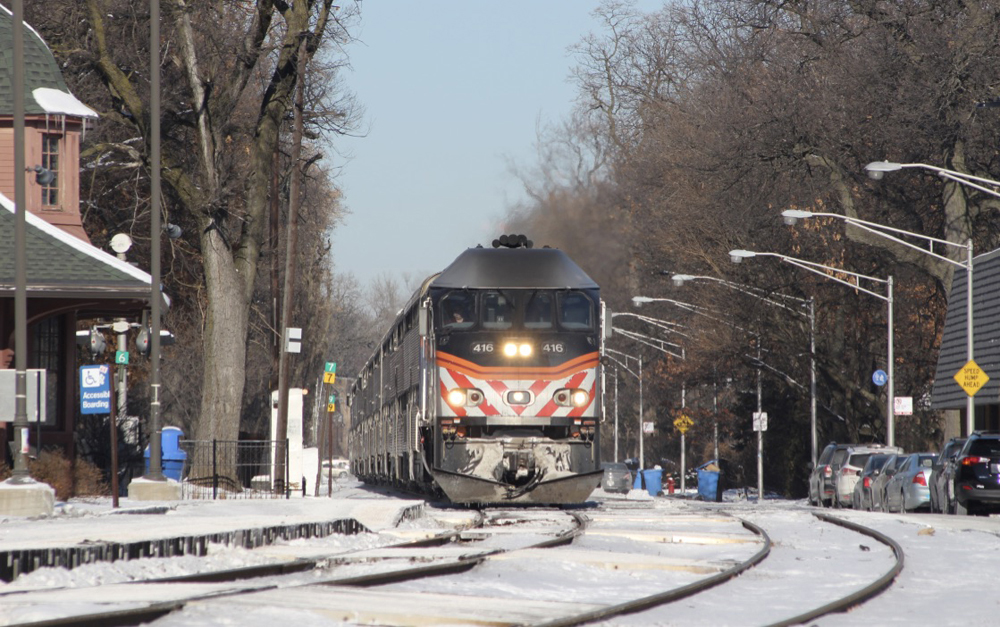 On July 2, 2021, the Rock Island heritage diesel named for former CEO Don Orseno leads train No. 609 off the main line and onto the Beverly Branch in a photo taken from the pedestrian grade crossing at West 89th and South Aberdeen streets in Brainerd. (Trains: David Lassen)

All the images in this photo gallery are labeled to correspond with numbered yellow arrows on the Beverly Branch map.

It’s not always sunny in Chicago. On an overcast May 24, 2019, an outbound train crosses over as it approaches Brainerd, the first station on the Beverly Branch. (Trains: David Lassen)

From a shot a little farther down the platform at 91st Street, a southbound train arrives at the station on Jan. 2, 2018. The diversity of station designs is one of the attractions of shooting on the branch. (Trains: David Lassen)

A few moments later, from the opposite platform at 95th Street, the inbound train and an outbound train with an MP36 prepare to meet at 91st Street. The couple with the stroller offer a good representation of the residential feel of Beverly Hills. (Trains: David Lassen)

F40PH-3 No. 184 leads a southbound train toward 99th Street station. The stretch leading to the station, with South Wood Street paralleling the tracks in close proximity, is the closest thing to street running Metra has to offer. (Trains: David Lassen)

In a shot from a trackside Metra parking lot, the trainset powered by F40 No. 184 passes through a small S curve between the 99th Street and 103rd Street stations. (Trains: David Lassen)

An outbound train stops at the modest brick station at 103rd Street on May 24, 2019. (Trains: David Lassen)

A better look at the station at 107th Street. (Trains: David Lassen)

Shadows are getting long in late afternoon as a train stops at 119th Street, the first of four stations in Blue Island. The next two are lightly used flag stops. (Trains: David Lassen)

After arriving at the Vermont Street station in Blue Island, Metra’s Rock Island unit awaits the start of its return trip to Chicago’s LaSalle Street station while an outbound through train to Joliet departs on the main line. (Trains: David Lassen)

Two F40s lead train 615 past parked Metra equipment just before its arrival at Vermont Street in a shot from the platform of the final station on the Metra Electric’s Blue Island Branch. (Trains: David Lassen)

Introduction to the Beverly Branch

The Beverly Branch is a unique segment of Metra’s 11-line commuter rail network. While there are other branch lines — two on the Electric District, one on the UP Northwest line — this one is essentially an alternate route, a 6-mile diversion from the Rock Island District main line providing service to the communities of Beverly Hills, Morgan Park, and Blue Island with an almost streetcar-like concentration of stations. Between Gresham, where the branch leaves the main line, and Blue Island, where it rejoins the main, there are 11 stations at roughly four-block intervals. The branch dates to 1870, when the area was being developed.

From a photography standpoint, the branch has three particular attractions. Between the 95th and 99th Street stations in Beverly Hills is the closest thing to street running Metra has to offer — three blocks where the tracks closely parallel South Wood Street. Almost every stop has a still-intact station. They vary widely in architecture and can be great photo backdrops. And at Blue Island-Vermont Street station, trains snake through an S curve that provides a wide variety of photo angles, as well as a chance to shoot trains on both the branch and Rock Island main line. As a bonus, the Metra Electric line has a branch line that ends a block away (and provides its own photo location for the Beverly Branch).

This is not a location I’ve visited as often as others featured in this series. I feel like I’ve only scratched the surface of in terms of photo opportunities. But these shots might give you a few ideas of the possibilities.

What you should know about the area

Getting there: Blue Island, at the south end of the branch, is about 19 miles from downtown Chicago via Interstates 90 /94 and 57. To reach the Brainerd station, the first at the north end of the branch, exit 90/94 at S. 75th Street, and turn west to S. Vincennes Avenue, and turn south. Turn west at S. 89th Street to reach the station. The adjacent map will give you an idea how to get to other stations. To reach the Vermont Street station, take exit 353 (127th-Burr Oak) off I-57; take S. Paulina Street paralleling the freeway to Vermont Street. Turn West and continue to the stations. (You’ll pass the station for the Metra Electric branch before getting to the Rock Island station.)

Creature comforts: There are fast-food places, gas stations, and other basics scattered throughout the area. A couple of things to be aware of: At the north end of the branch, 95th Street, which is also U.S. Route 20, has a lot of fast-food options a little to the west of the Beverly Branch. And along the branch, there’s a Starbucks at 103rd Street and Longwood, very close to the 103rd Street station, that’s a good stop for a beverage and other necessities. There are also a number of restaurants on Western Avenue, which parallels the branch to the west.

Train time: The Rock Island District was one of several Metra lines that had service increased in mid-July. As a result, there are now 20 inbound and 20 outbound trains on weekdays, and 10 inbounds and 11 outbounds on weekends. Schedules are here. At Blue Island, you’ll also see the Rock Island trains that bypass the branch, as well as some freight traffic — Iowa Interstate trains operate from the Blue Island yard. And a short distance away from the station is the complex, multi-railroad Blue Island junction.

4 thoughts on “Beverly Branch railfanning near Chicago with image gallery” 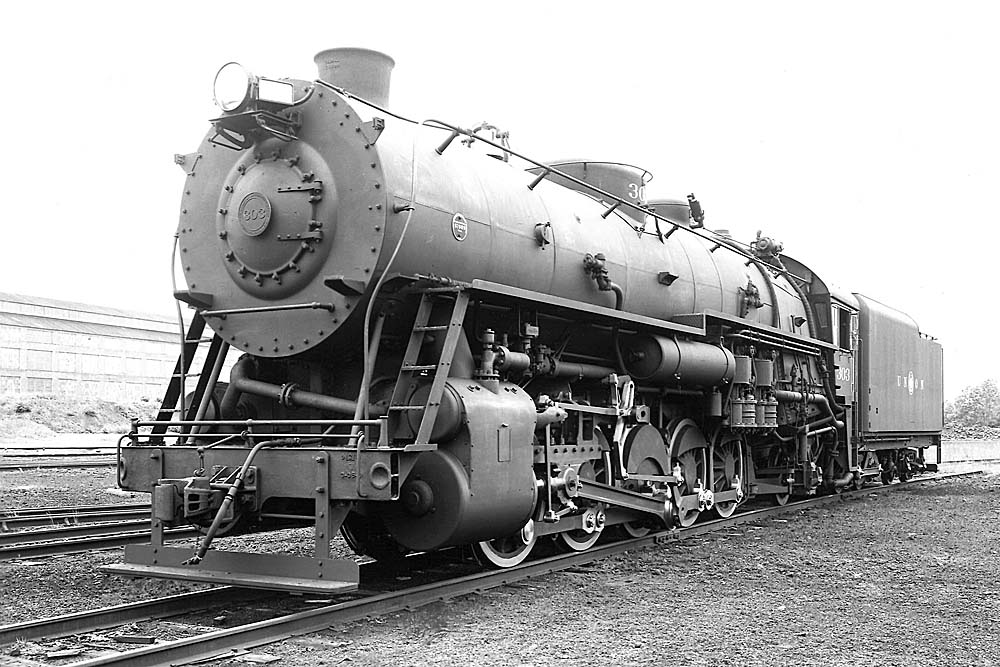 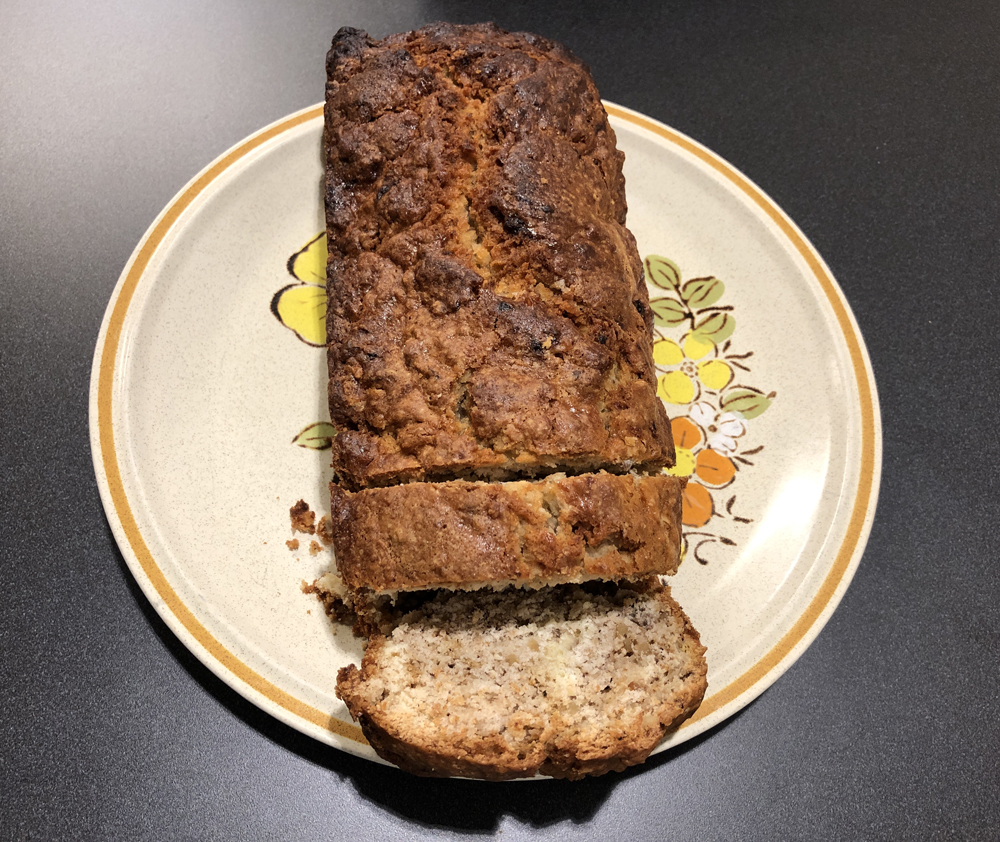