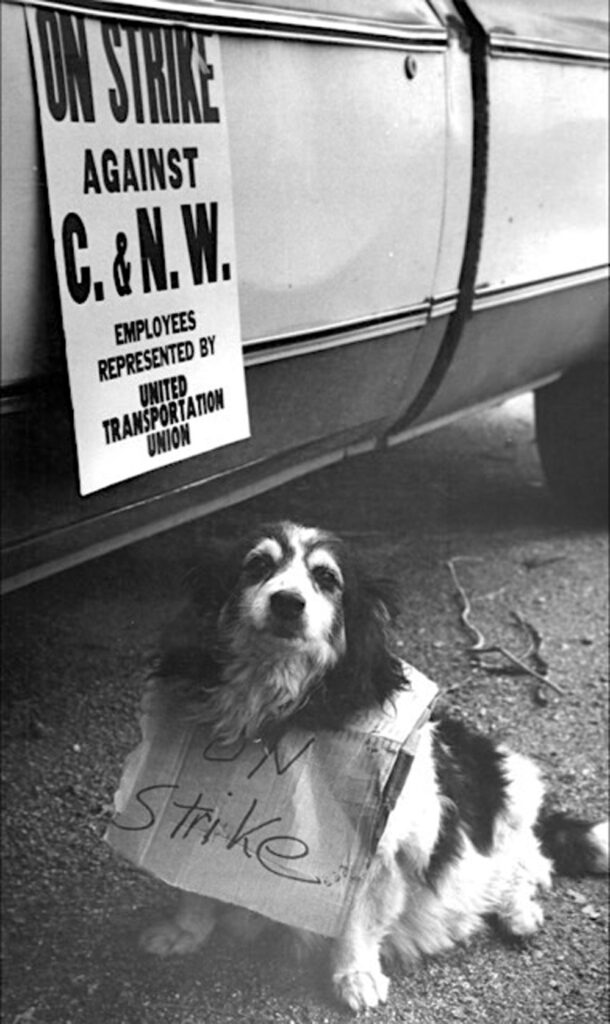 In mid-September 2022, the first nationwide railroad strike in three decades was narrowly averted thanks to a tentative deal between Class I railroads and three labor unions. The news brought to mind a labor dispute more than 30 years ago — and an unusual picket line.

In the 1980s, railroaders in Norfolk, Nebraska’s Chicago & North Western Railway yard found a very friendly but very hungry stray dog. They gave him food, a home in the yard office building, and a name, “Yard Dog.” Where he came from was a mystery but soon he was as familiar a part of the Norfolk railroad scene as the crossties and cabooses.

When the office closed on holidays, someone would be sure to swing by to let Yard Dog out for a while and top off food and water supplies. When it was time for a vet visit or more dog food, the railroaders would take up a collection.

Gentle and amiable, Yard Dog treated every visitor like an old friend — but there were exceptions. He would disappear at a run whenever children were around and would stay hidden until they were long gone. Railroaders speculated perhaps the dog had long ago been mistreated by a child.

One day, the United Transportation Union went on strike against the Chicago & North Western. I was a newspaper reporter at the time and my editor sent me to photograph the strikers on the picket line.

Norfolk was a remote outpost on the C&NW system and, as it turned out, there was no formal picket line. Instead, the workers were standing in the parking lot chatting while Yard Dog handled the picket line duties.

Read more articles like this under the History tab in Trains!