Home / Railroads & Locomotives / History / The Golden Spike and other notable track completion ceremonies in the U.S. and Canada

From west to east, dates and locations for 27 railroad completion celebrations 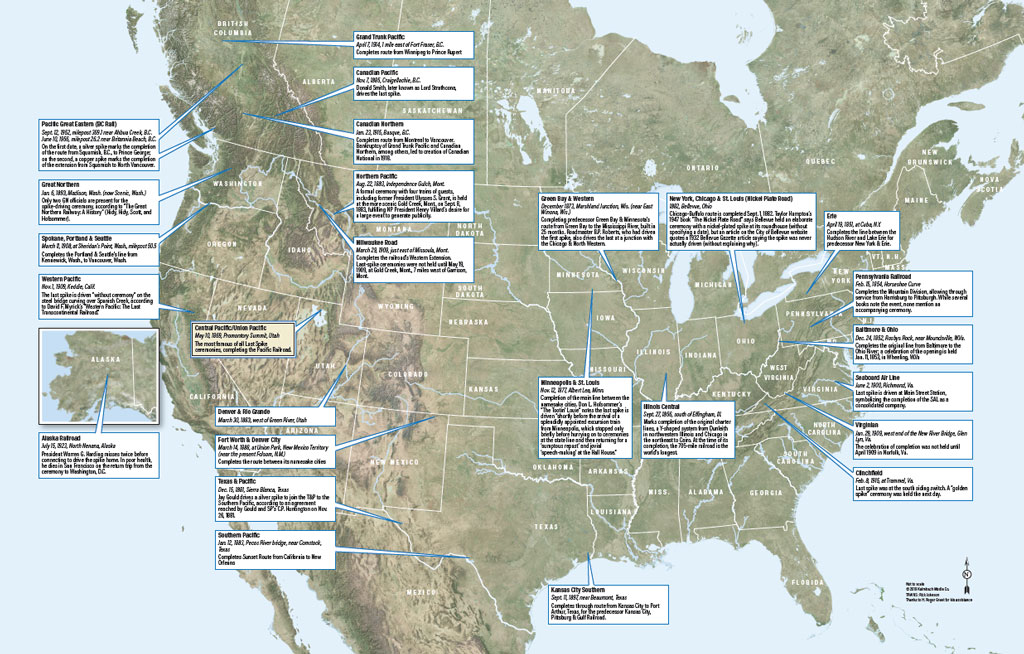 Promontory Summit, Utah, may have hosted North America’s most famous final-spike ceremony, but the event on May 10, 1869, was not unique. Not all railroads had a completion “moment:” the New York Central is an example of a railroad formed through a series of mergers and consolidations, and others were built on multiple fronts and gradually placed into service.

Our research turned up 26 other last-spike events, some predating the Transcontinental Railroad, and one as recent as 1956. We suspect this is not an exhaustive list and welcome information on additional such ceremonies.

BRITISH COLUMBIA
Pacific Great Eastern (BC Rail)
Sept. 12, 1952, milepost 369.1 near Ahbua Creek, B.C. June 10, 1956, milepost 26.2 near Britannia Beach, B.C. On the first date, a silver spike marks the completion of the route from Squamish, B.C., to Prince George; on the second, a copper spike marks the completion of the extension from Squamish to North Vancouver.

Canadian Northern
Jan. 23, 1915, Basque, B.C. Completes route from Montreal to Vancouver. Bankruptcy of Grand Trunk Pacific and Canadian Northern, among others, led to creation of Canadian National in 1918.

UTAH
Central Pacific/Union Pacific
May 10, 1869, Promontory Summit, Utah. The most famous of all Last Spike ceremonies, completing the Pacific Railroad.

TEXAS
Texas & Pacific
Dec. 15, 1881, Sierra Blanca, Texas. Jay Gould drives a silver spike to join the T&P to the Southern Pacific, according to an agreement reached by Gould and SP’s C.P. Huntington on Nov. 26, 1881.

MINNESOTA
Minneapolis & St. Louis
Nov. 12, 1877, Albert Lea, Minn. Completion of the main line between the namesake cities. Don L. Hofsommer’s “The Tootin’ Louie” notes the last spike is driven “shortly before the arrival of a splendidly appointed excursion train from Minneapolis, which stopped only briefly before hurrying on to ceremonies at the state line and then returning for a ‘sumptous repast’ and jovial ‘speech-making’ at the Hall House.”

ILLINOIS
Illinois Central
Sept. 27, 1856, south of Eff¬ingham, Ill. Marks completion of the original charter lines, a Y-shaped system from Dunleith in northwestern Illinois and Chicago in the northeast to Cairo. At the time of its completion, the 705-mile railroad is the world’s longest.

WEST VIRGINIA
Baltimore & Ohio
Dec. 24, 1852, Rosbys Rock, near Moundsville, W.Va. Completes the original line from Baltimore to the Ohio River; a celebration of the opening is held Jan. 11, 1853, in Wheeling, W.Va.

Virginian
Jan. 29, 1909, west end of the New River Bridge, Glen Lyn, Va. The celebration of completion was not held until April 1909 in Norfolk, Va.

Clinchfield
Feb. 8, 1915, at Trammel, Va. Last spike was at the south siding switch. A “golden spike” ceremony was held the next day.

2 thoughts on “The Golden Spike and other notable track completion ceremonies in the U.S. and Canada”