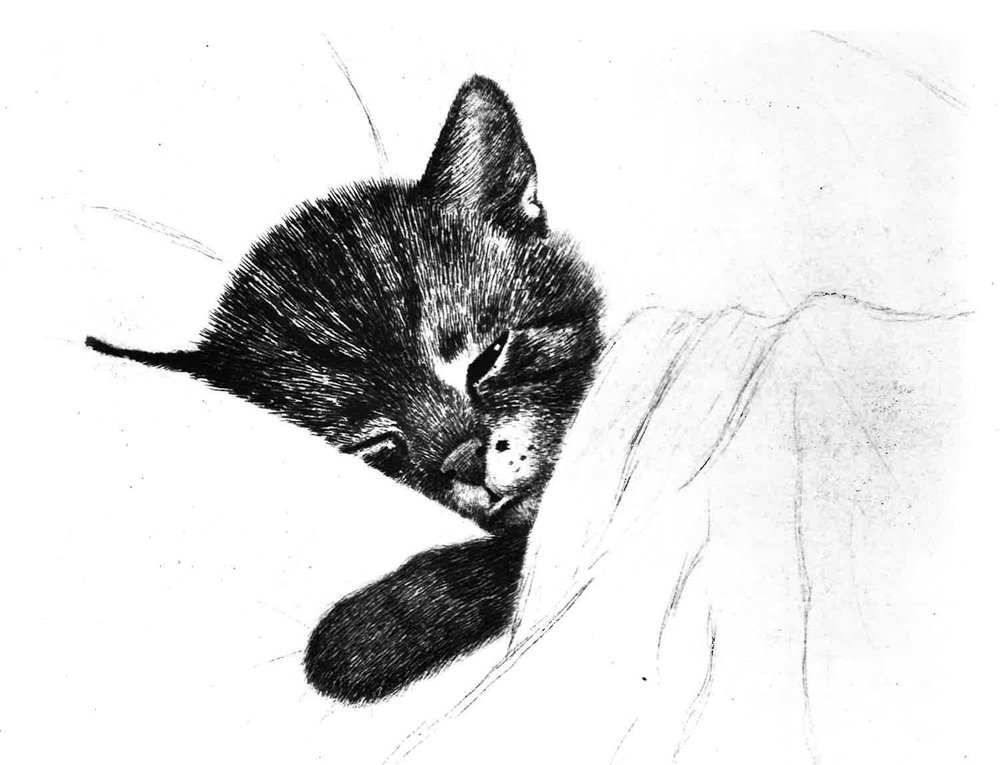 Mind-blowing Chessie facts: What began as a simple etching of a sleeping kitten, blossomed into one of America’s most-loved corporate symbols. This is the Chesapeake & Ohio Railway’s Chessie Cat. Trains collectionAmerican businesses have fostered a plethora of advertising characters attempting to endear us to their products and entice us to purchase them. The likes of Mr. Peanut, the Morton Salt Girl, Tony the Tiger, the Jolly Green Giant, and the Pillsbury Dough Boy all conjure images that make us smile and think of products we have known for decades. While many consumer icons have gone through the advertising world’s version of cosmetic surgery over the years — with a nip here and tuck there, emerging with an updated image — some have faded from the forefront, but maintain an emeritus role, schooling today’s characters as to what a classic really looks like. Here are five mind-blowing Chessie facts.

Among this classic group can easily be counted one of the cutest, snuggly felines ever to cross paths with America. In the September 1933 issue of Fortune magazine, the Chesapeake & Ohio Railroad introduced Chessie along with a slogan that read in part: “Sleep like a kitten.” Chessie’s job was to promote C&O trains like the George Washington, the Fast Flying Virginian, and the Sportsman. She took up this challenge with a gentle, soft spirit and purred her way into the hearts of travelers. The C&O developed Chessie’s character to sell their product, but along the way she became America’s “sleep-heart.”

Let’s look behind Chessie’s public persona and get to know this classic advertising kitten a bit better.

Considering the amount spent to influence consumers, whether today or in 1933, Chessie was an incredibly cheap hire. The original etching that became the image of Chessie was rendered by Viennese artist Guido Grünewald. The image was not produced specifically for the C&O’s use. Grünewald often drew animals as his subjects. For his efforts in this instance, the C&O shelled out $5 for the etching and its use. That’s right, Chessie became a national star for an original investment of $5.

To say that Chessie was instantly popular is an understatement. She became the darling of the railroad passenger world and the C&O knew they had struck a popular note with the traveling public. Capitalizing on Chessie’s fame, her family grew in 1935 with twin kittens — Nip and Tuck. They were the spitting image of their mother. In fact, they looked exactly like their mother as they were copies of the original etching reduced in size.

With the introduction of Chessie’s children a controversy erupted the size of which clogged the letter boxes at both the C&O’s passenger department and their advertising agency. America wanted to know if Nip and Tuck had a father! What type of man was he? And, above all: We want to meet him. In the mid-1930s such questions weighed on the public consciousness just like a product’s environmental record does today. The C&O addressed the family-ties issue in 1937, when “Chessie’s old man” appeared on the scene. Peake, as he was known, displayed the stature of a strapping tom cat. He would be a fine father figure for Nip and Tuck and an outstanding husband to Chessie. Together the entire family would ride the C&O and tell everyone how good the railroad was.

No. 3: And the cards and letters just keep coming

Today we measure the success of communication by how many hits a web page receives. How often an online video is watched. Or the number of shares a message gets. In the mid-1930s people took the time to compose a letter — either handwritten or on a typewriter — and mail it to someone. In the case of Chessie, the letters poured into both the railroad and their ad agency. After Chessie’s initial appearance over 300 letters were received in two days asking for additional prints of the ad. It was thousands of letters that brought Peake into the family fold. Letter writers, in some cases, even proclaimed their allegiance to C&O’s passenger trains saying, “If it’s good enough for Chessie, it’s good enough for me.” Simply, America loved Chessie and her family.

When dealing with felines most everyone is aware of the old English proverb, “A cat has nine lives. For three he plays, for three he strays, and for the last three he stays.” We tend to forget all but the first sentence. Regardless, the number nine has become associated with cats and the proverb has stuck.

In the case of Chessie, the C&O introduced the number nine connection in a manner that has gone slightly overlooked. Whenever Chessie traveled aboard her favorite C&O train, her sleeping car section was always “Lower 9.” Get it? There was an exception to this. During World War II, Chessie did her patriotic duty and gave Lower 9 to a solider. C&O ads during the war made note of this gesture, urging everyone to help the effort by following Chessie and giving priority to military personnel. Chessie still traveled by C&O trains during wartime, but only when it was absolutely necessary. Her accommodations — she slept under Lower 9, until the war was over.

No. 5: Chessie, the train that never was

Post-World War II, U.S. railroads moved to re-equip their worn passenger trains. The late 1940s saw the introduction of the dome car, the California Zephyr and dozens of new passenger cars designed to make rail travel modern and enjoyable for family vacations. The C&O would be a part of this trend. In 1944, before the war was over, C&O chairman Robert Young lead his railroad to develop a completely new day-light, luxury train slated to travel between Washington, D.C., and Cincinnati. A fleet of cars was ordered from the Budd Co., including extra-roomy 36-seat coaches, twin-unit dining cars equipped with a movie theater and dome coaches. The new train would be pulled by a massive M1-class steam turbine locomotive. Baldwin built three units specifically for this project.

Alas, Young’s luxury dayliner never turned a wheel. By the time the cars and locomotives were delivered in 1948, passenger traffic in general was tumbling. Specifically, the Washington-Cincinnati route had become a money-losing proposition. The parts and pieces of the new train were sold off and the idea became a historic footnote. The name Young chose for his train — Chessie.

Check out the full article on Chessie at Trains.com.