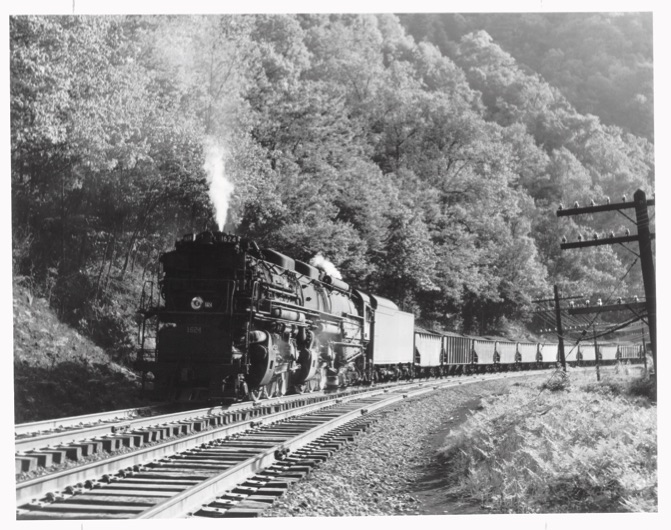 This C&O 2-6-6-6 strains mightily to get her 70 loads of eastbound coal moving at Thurmond, W. Va., in 1956. The Balky 1624 had slipped down, then cut off and run ahead to put down sand, and is now trying again. A full third of her tremendous engine weight rests on her lead and trailing trucks – dead weight that must be forced into motion in situations like this.
Philip A. Weibler

Everything about the Big Boy grabbed headlines – from its size (UP called it the “World’s Largest Locomotive,” although C&O’s 2-6-6-6 was heavier and had about the same size boiler) to the appearance of the name “Big Boy” in chalk on the first engine, a happenstance milked heavily in advertising by Alco and UP.

Union Pacific historians are fond of saying that the Big Boy could have produced even more than its 6300 drawbar horsepower (dbhp) if it hadn’t had to use low-quality coal. But that’s difficult to understand, given that during its tests the Big Boy was operated at full capacity and the boiler was fully supplying the demands of the machinery. If higher quality fuel had been used, it might have been able to use less of it. But why design one of the all-time ultimate steam locomotives and handicap it by using inferior fuel? If high quality coal was expensive to come by, why not burn oil?

Alco and UP also promoted the claim that Big Boy’s machinery was designed for 80-mph operation. But USRA engines of 1919 – the 4-8-2s, specifically – with drivers only an inch larger and counterbalanced with 1919 technology, had been capable of running 80 mph for 22 years. And other than attracting publicity, what was the actual value of running Big Boys at 80 mph? How much of Big Boy’s running time was spent going more than even 65 mph?

What UP needed was a locomotive capable of handling tonnage up the Wahsatch and Sherman grades and then running 60 mph between those summits. With Big Boy the railroad got more speed than it could make use of, and less tonnage-hauling capacity than it should have, given the engine’s weight.

They sure were pretty, though.

The C&O and Lima got similar publicity for their 2-6-6-6. The Allegheny proves that not all Super Power was created equal. It is well documented that the class H-8 2-6-6-6 had been, from the outset, designed to outperform N&W’s class A 2-6-6-4 of 1936. The Advisory Mechanical Committee (AMC) of the C&O and other Van Sweringen roads had more than five years to consider the performance of Seaboard’s 2-6-6-4s of 1935 and UP’s Challengers of 1936 to aid in designing a new high-speed articulated. The AMC knew that C&O would buy anything it recommended and was willing to spend as much of C&O’s money as necessary to accomplish its goal.

So the Allegheny did, indeed, beat the A’s horsepower figure. But for an additional 100 tons of engine weight and an extra $100,000 per engine and tender, shouldn’t it have? You can do the math and form your own conclusion about whether C&O got its money’s worth out of all that additional weight and expense.

The 2-6-6-6 is today considered by many to be the ultimate expression of the Super-Power concept. However, C&O put these engines to work in the mountains, where they seldom if ever got to use all that horsepower, and their 110,200 pounds of starting tractive effort limited the tonnage they could handle; their rating was only 200 tons more than the H7 2-8-8-2 of the 1920s. The 2-6-6-6 fared better hauling tonnage up through Ohio on C&O’s Russell (Ky.)-Toledo run, but because of a car limit imposed by the operating department, Chessie’s T-1 2-10-4s (probably Lima’s finest locomotive) of 1930 could do the same job much more economically.

But what happened to the idea that the engine should be a tool to make as much money as possible for its owner? Was it a sound business decision to design and build such an expensive and heavy locomotive just to outperform another locomotive? Rather than admit a mistake, C&O went on and bought 60 of them.

The wartime president of C&O neighbor Virginian, Frank Beale, came from C&O, where he’d been an operating official on Allegheny Mountain when the 2-6-6-6s came. Beale was highly impressed (motive power must not have been his strong suit). He must have figured that VGN had no mountains east of Roanoke, so the 2-6-6-6 would work just fine. He bought eight more of them, plus five C&Ostyle 2-8-4s for fast freights. For a 35-mph railroad, here were 13 big, heavy, expensive locomotives, each of which developed its maximum drawbar horsepower at better than 40 mph. But, like their C&O counterparts, the fans and historians liked them. The stockholders didn’t have a choice.

This story originally appeared in the September 2004 issue of Trains Magazine.

15 thoughts on “Big Boy versus Allegheny”