The truth can be far scarier than any fictitious tale 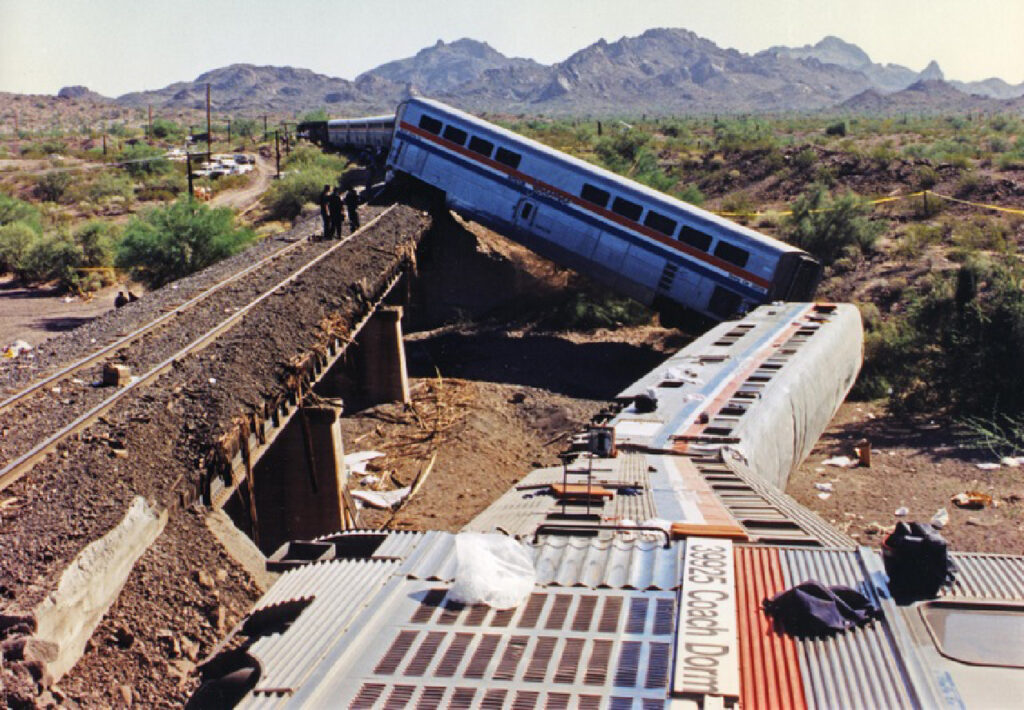 A scary tale of two train wrecks: Around the time of All Hallows’ Eve, it is tradition to subject ourselves to dark, scary tales intended to make us afraid of the dark and fear those things that go bump in the night. The vast majority of these stories are pure fiction that, when peeled back, reveal nothing more than a creative storyteller’s adventure at our expense. It can be said, however, that the true stories, the ones that actually happened, are the scariest of all. You be the judge as we experience two scary train wrecks.

Suddenly, he felt his own car lurch and jump the tracks, then thud, thud, thud along the wooden ties across the bridge out of control. Death in all her possible violent agony began.

The huge [train] trembled, rocked, and swayed as steel snarled on rocks and ties. For a split second there was a terrifying rumble similar to a distant earthquake as speeding coaches furiously leaped from the rail. There followed a horrifying roar, as if a thousand freight trains were colliding. Resounding over the flat quiet desert, the roar turned into the screeching, splintering, slashing sounds of crunching steel, as if some fiendish giant were squeezing the train together with his mighty hands. Accompanying this sickening grinding of steel striking metal and rock, tracks being yanked from their ties, metal car walls made of the strongest steel ripped open, folded and crushed, were the sounds of people trapped in the terror. Death could not have chosen a better spot to strike. Out of control, the [train’s] middle coaches snapped their connections with the engines and slammed into the old iron bridge. Cars telescoped into each other, steel crashing and crunching. A dining coach filled with late dinner passengers and retiring waiters and cooks was tossed like a toy replica into the air and landed in a jagged, twisted heap in the river, with a club car nosing down after it; two other cars followed, hurtling against the heavy steel girders of the bridge, while other coaches simply overturned. The heavy, rusty girders of the bridge swayed, then snapped and collapsed like so much cheap tin into the stream below. Five more cars loaded with terrified, panic-stricken men and women toppled down on top of them. The beams of the bridge jutted in every possible angle, like so much matchwood. In the scrap pile of mashed hulls, the once beautiful [train] lay in the throes of agonized death.

For its time, the City of San Francisco could easily be labeled the most luxurious streamlined passenger train in the West, if not the entire country. The Union Pacific, Southern Pacific, and Chicago & North Western, who operated the Chicago to Oakland speedster ponied up $2 million to have it built ($19.1 million in 2022). Plush Kelly green seats made for a comfortable ride. Polaroid provided a special tinting material for the windows to reduce glare. The EMD E2 A-B-B locomotive set churned out 5,400 hp, enabling the City of San Francisco to rocket across its westbound route in 45 hours, 45 minutes. That’s 19 hours better than previous marks. Beyond the base ticket price and Pullman fees, there was an “extra” fare associated with riding this luxury streamliner — $5 for the chair car, $15 in Pullman open sections and $22.50 in a roomette.

Leaving Carlin, Nev., the City of San Francisco was 30 minutes behind time. Veteran engineer Ed Hecox knew the next long, empty stretch of Nevada would be ideal for making up time. He opened the throttle spurring the train up to 90 mph.

It was 9:33 p.m. when Hecox spotted a large tumbleweed laying across one rail near bridge No. 4 over the Humbolt River. It was unusual and he watched the weed as the train approached. Upon hitting the tumbleweed, Hecox reported that there was a significant jarring felt in the cab. He hit the brakes, but it was too late. The City of San Francisco was in the process of derailing. The locomotives slid forward off the rails. Five cars uncoupled and plunged into the riverbed below the bridge. In that instant 24 passengers were killed and nearly all of the 170 people on board suffered some kind of injury.

The derailment site was desolate. It took hours for the first help to arrive and daybreak the following morning before a rescue train reached the site. Aboard the rescue train were special agents from the Southern Pacific and the FBI. Despite the area around the wreck having been completely disturbed, it was quickly determined that the City of San Francisco had been sabotaged.

Just before bridge No. 4, a 30-foot section of rail had been tampered with. The perpetrator(s) pulled up the spikes on this piece of rail so that it could be forced inward by approximately 5 inches. The tumbleweed was used as a disguise. Additionally, dark brown paint had been applied to the area, further hiding the vandalism. A fast-moving train hitting this large a gap would surely derail in a catastrophic manner.

According to Dan O’Connell, the Southern Pacific’s chief special agent, sabotage of this nature in this location would have taken 90 pounds of tools. The tools had to be carried from the highway over a mile away. The job would have taken several hours to complete. Incidentally, there was a 4-hour window with no trains on bridge No. 4 prior to the City of San Francisco’s passing.

During the ensuring investigation, O’Connell became obsessed with solving the case. In following up on leads, the various investigating agencies interviewed over 93,000 people.

Around 1:35 a.m., Amtrak’s New Orleans to Los Angeles Sunset Limited was traveling through a dark, remote desert 70 miles southwest of Phoenix. As the train rounded a curve heading toward the bridge over Quail Springs Wash, passengers were awoken by the horrific screeching of the brakes. Then there was an incredible shriek of metal on metal as the train derailed and Superliner cars plunged 30 feet into the dry wash below the bridge. The lights went out and the only sounds were the moans and cries of 258 passengers. Both locomotives and eight of 12 cars were off the track. The second, third and fourth cars rolled on their side, off the bridge. Car five in the train jack-knifed, heading down the embankment into the wash below.

The derailment took place miles from the nearest road. When the call for help came in, first responders raced to the scene in all types of vehicles across many routes. They found nearly 100 injured passengers, 12 in serious condition and one fatality — Mitchell Bates, an Amtrak sleeping car attendant.

During the rescue efforts, a passenger, Neal Hallford, noticed a piece of paper under a rock near the train. The note was an anti-government manifesto from a group identifying itself as the Sons of the Gestapo. The derailment was not an accident. The Sunset Limited has been sabotaged.

As the FBI investigation ramped up, it was found that on the curve leading into the bridge, 29 spikes had been pulled from one of the rails. The rail was then shoved inward by 4 inches. Additionally, wires had been connected between the rails so that the signaling would not detect the broken rail.

The perpetrator(s) had to bring heavy tools a great distance off-road to vandalize the track. The FBI was looking for someone who knew how the rail system worked. Right from the start, however, the investigation was hampered. Any evidence of criminal travel to or from the scene was obliviated by the onslaught of rescue vehicles that arrived in the wee hours of the morning.

The scary part, however, is that both the City of San Francisco and the Sunset Limited were sabotaged in the exact same manner, albeit 56 years apart. The other significant fact held in common by both incidents is that to this day neither case has been solved. No one has been brought to justice for either wreck.

At the start of World War II, the Southern Pacific curtailed its active investigation of the City of San Francisco sabotage. In the case of the Sunset Limited, the FBI case is still open with a $310,000 reward leading to an arrest and conviction.

The truth can be far scarier than any fictitious tale.

6 thoughts on “A scary tale of two train wrecks”