A fun, popcorn picture with one caveat

Courtesy: Disney-Jerry Bruckheimer Productions
The Lone Ranger, the timeless legend of radio and screen, is retold by Disney and Jerry Bruckheimer this summer in an over-the-top, in-your-face movie about the dynamic duo of the Old West.

The film stars Armie Hammer in the title role and Johnny Depp as Tonto.

One element of this familiar story that viewers will quickly learn is that this tale is told through the eyes and recollections of The Lone Ranger’s old, weary sidekick, who starts the film as an inanimate 1930s side-show figure. The sidekick, Tonto, comes to life and speaks to a young boy wearing a period Lone Ranger costume.

Tonto (Depp) tells the boy a story of good versus evil, old versus new, a clash of different cultures sparring for the same space, and what happens when people are intoxicated by obtaining unlimited wealth and what they are willing to do to keep it.

“The Lone Ranger” contains an undercurrent of greed, corruption, and injustice concealed by a seemingly simple plot billed as a comedy western. The plot vehicle that drives the story is the railroad. And if you think you’ve seen this plot element before, look no further than Sergio Leone’s 1968 “Once Upon A Time in the West.”

If you like lots of railroading in your movies, this is the one to see.
But be prepared.

Trains are going to encounter almost endless explosions, derailments, and crashes. If “The Lone Ranger” was rooted in fact, it would have been a miracle that railroads were built in the West at all.

Courtesy: Disney-Jerry Bruckheimer Productions
Making the movie
Disney and Bruckheimer originally planned to film on an existing mining railroad in southern New Mexico. Construction of the movie’s Western towns was already in progress when Disney and Bruckheimer decided to build a brand-new railroad farther north. Albuquerque, N.M.-based Gandy Dancer Railroad and Excavating Services received contracts to do the job. The new line had no outside interchange and was removed after filming was complete.

According to the production company, Gandy Dancer hauled in 3,889,425 pounds of 33-foot rail, bars, tie places and ties from Blythe, Calif. An additional 60,429 pounds of bolts, washers, and other track parts came from Kansas City, Mo., and 402,000 pounds of ties and spikes from Stockton, Calif. The result was a five-mile loop of single- and double-track line in the Rio Puerco desert. Another mile of track, for the many mining scenes, was built near Creede, Colo.

Meanwhile, in Sun Valley, Calif., in northern Los Angeles County, a machine shop built two trainsets complete with two faux steam engines. For ease of movement, the rolling stock was built in the same fashion as shipping containers, in that they could be lifted on and off their chassis’ and onto flatbed trucks for highway transport. The two locomotives had hydraulic hoses connecting them to the tenders, where a pair of 1,000 hp Cummins diesel engines supplied power. Both trains were operated from a computer inside the cab. Even so, a real locomotive engineer was in the cab to control the braking system. In case of an emergency, he could override the computer. Movie special effects produced all the smoke and steam there is to see in the film.

The trains were designed for speeds of up to 30 mph. An EMD SW1500 was used to move the cars during shooting when the steam engine was not part of the scene. The meticulous attention paid to the railroad scenes is typical of the entire production effort. 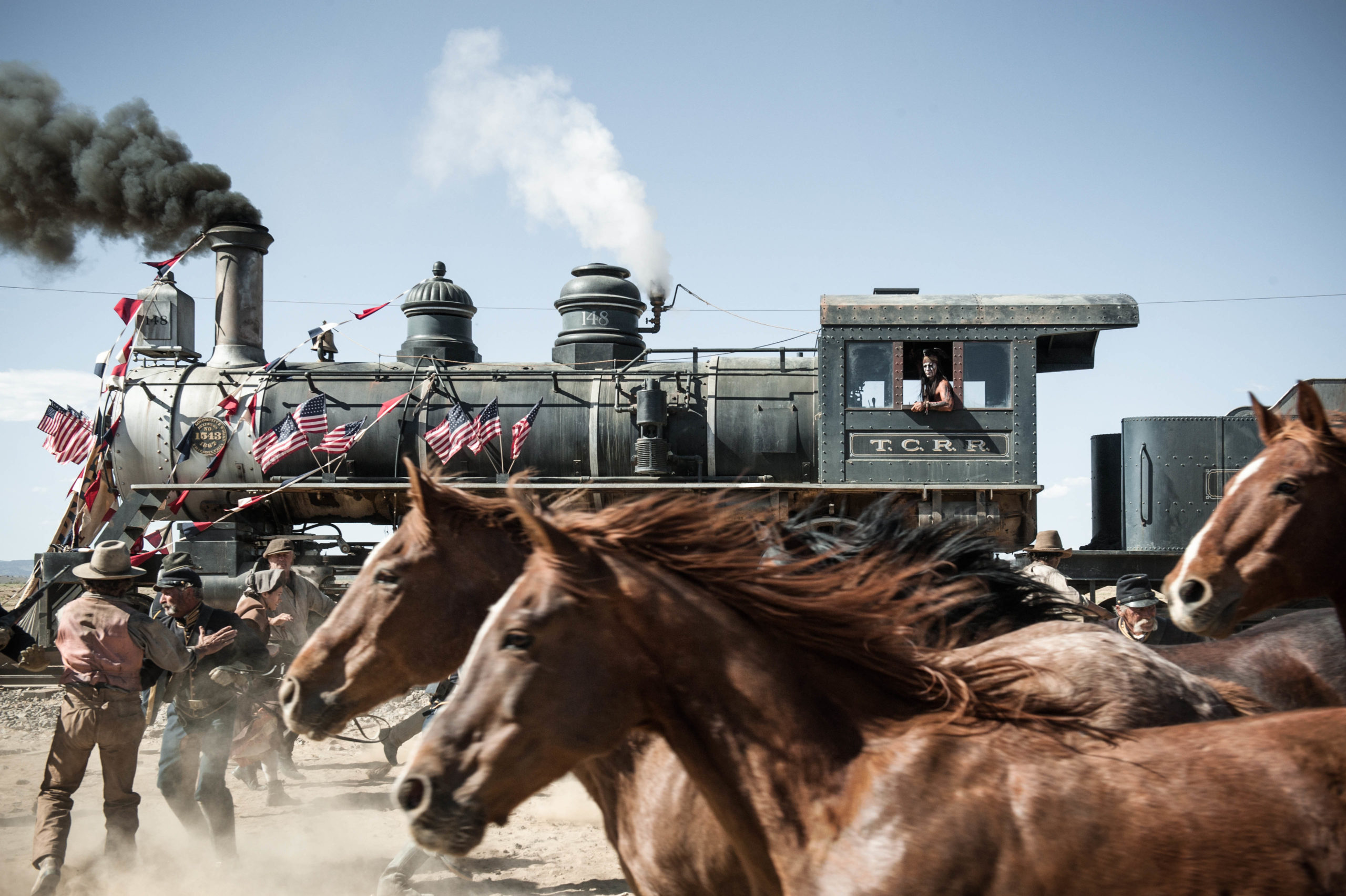 Courtesy: Disney-Jerry Bruckheimer Productions
About the acting
Johnny Depp is brilliant as a slightly off-kilter Tonto. Armie Hammer portrays the Lone Ranger and becomes a suitable sparring partner for Depp. This is a buddy movie, after all. The supporting cast of seasoned actors lets the audience indulge in the suspension of disbelief.

While “The Lone Ranger” may win various technical awards, I doubt it will win “Best Picture of the Year.”

Why? It is mostly sharp and on point, but at other times it is a mess. But even then, it is a truly brilliant mess. I don’t believe it is always sure where it’s going, but it most assuredly keeps your attention.

One thing I can guarantee; if this movie is a financial success, a small group of people somewhere in the Disney empire will be sitting around a large table trying to figure out how to make a sequel. And then they will discuss how to make it into a theme park attraction.

Caveat
“The Lone Ranger” is a good movie, but not a great one. Due to what I thought was a senseless high-body count and some particularly gruesome plot points, I would think twice before taking impressionable kids to see it.

I give it seven out of 10 choo-choos.

“The Lone Ranger” is rated PG-13 and premieres nationwide July 3.

David Lustig is a TRAINS Correspondent based in Los Angeles. He is a veteran reporter familiar with railroading, Hollywood, and the West.