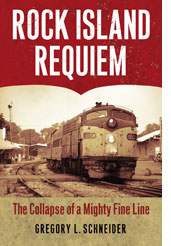 This impressive volume chronicles the long, sad decline of the Chicago, Rock Island & Pacific Railroad, and illustrates how federal regulation dating back to the early 20th century had become counterproductive by the 1960s. The often-painful story is presented in detail, and the 56 pages of notes and seven-page bibliography will assist those who would like to know more. The book will be of great benefit to those who have forgotten railroading’s “bad old days” of the 1960s and 1970s.

The book is divided into three “acts:” Merger, Bankruptcy and Liquidation. Following a brief introduction, the story opens as the Rock Island exits its second bankruptcy in 1948. After a brief retrospective on how president John Dow Farrington accomplished this recovery, there is some discussion of events in the 1950s, when President Dwight D. Eisenhower appointed a committee to analyze problems in the railroad industry. The resulting Weeks Report (named for the commerce secretary who oversaw the effort), called for limited deregulation, was ahead of its time, and was ignored by Congress. As history ultimately proved, things would have to get worse before something was done.

Chapter 2 opens in 1961, when Farrington proposed a merger to Union Pacific Railroad president A.E. Stoddard. This led to competing proposals by UP and Chicago & North Western to acquire the Rock Island; the resulting bureaucratic quagmire lasted more than a decade. The regulatory review generated 48,000 pages of testimony and more than 200,000 pages of additional evidence, which Schneider distills to about 100 pages in his account.

Reading about this dysfunctional processes will have readers rolling their eyes in amazement. By the time the Interstate Commerce Commission reached a decision in 1974, both UP and C&NW had lost interest in the deteriorating Rock Island. In fact, things had changed so much that UP and C&NW, once rivals seeking to acquire the Rock Island, began what UP executive John Kenefick called “an extramarital affair,” coordinating freight sales and rates, and providing single-line service into Chicago. The extramarital affair eventually led to marriage of UP and C&NW in 1995.

The book’s second act covers the late 1970s, after Rock Island declared bankruptcy following the failure of the UP merger. The Rock Island, unlike Penn Central, was not too big to fail, but management hoped that RI could benefit from federal aid under the Regional Rail Reorganization Act of 1974. Attempts to obtain a federal loan failed, however, and the Rock Island was forced to file for bankruptcy in 1975. This case landed in Judge Frank McGarr’s courtroom, where it would last for 9 years.

For the first five years, the Rock struggled to keep operating, even as the physical plant continued to decay. Rock Island did not join Amtrak in 1971, choosing instead to continue operating its own intercity trains to Peoria, Ill., and to the Quad Cities in Illinois and Iowa. A 1978 photo of a run-down Peoria Rocket graces the book’s dust jacket and symbolizes the railroad’s decline. Rock Island intercity trains were discontinued that year, but the Chicago-Joliet suburban service would be saved and ultimately modernized as Metra’s Rock Island District.

Other problems faced by the struggling railroad during the late 1970s included deferred track maintenance and awful weather, but the final nail in the Rock Island coffin was a labor dispute in 1979, which Judge McGarr referred to as “a suicidal strike.” Shortly after the strike, a report from the Peat Marwick Mitchell accounting firm found that the Trustee’s plan of a slimmed-down “core” railroad would not be viable. Judge McGarr then ordered that the Rock Island be liquidated.

The book’s third act explains that liquidation process, including the U.S. Supreme Court’s rejection of a lawsuit by the Railway Labor Executives Association against the Rock Island trustee. Once labor protection issues were out of the way, Rock Island liquidated its assets, paid its creditors, and reorganized as the Chicago Pacific Corp., which was acquired by the Maytag Corp. in 1988. Schneider points out, however, that many Rock Island routes are operated by other railroads including Metra, Union Pacific, and Iowa Interstate, whose locomotives are decorated with a modified RI herald.

Although the primary story concerns the demise of the Rock Island, the book addresses trends in the railroad industry as a whole in the 1960s and 1970s. Various crises such as the Penn Central bankruptcy and the creation of Conrail led to reforms such as the Staggers Act of 1980, which essentially deregulated the industry. Although too late to save the Rock Island, deregulation allowed the railroads to shrink and merge their way to profitability.

Mr. Schneider’s endnotes and bibliography demonstrate extensive research, and he adds to the narrative by including nuggets such as the impact of Rock Island in popular culture. For example, several chapter titles contain pop-culture references, and Chapter 8, “The Omen,” describes a scene from the horror movie of the same title that was filmed in a Rock Island yard. Schneider explains that the demon-possessed locomotive in the film was perfect metaphor for the declining railroad in the late 1970s.

This book describes an important story in transportation history, and it should be read by anybody interested in understanding why President Jimmy Carter signed legislation deregulating airlines and railroads. With periodic calls for some kind of re-regulation from some shipper interests, it is useful to have a book like this one to remind us of what happens when regulation gets out of control.