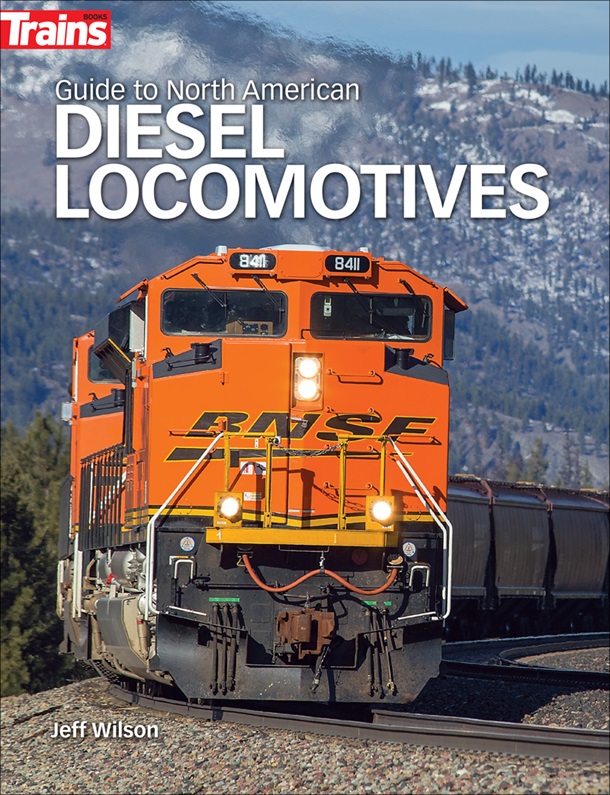 Back in the late 1950s/early 1960s, many “old guard” railfans held the opinion that the hobby of train watching would gradually die out concurrently with the demise of steam. In 1963, Lucius Beebe, author and bon vivant, wrote to Trains and expressed this sentiment. He said “[W]hen the bottom of the barrel of steam and old-time railroad art is reached, it will be the end of the road for Trains and for the sort of books I undertake to write and illustrate.” He concluded “[T]here will be no replacements when the now-existing resources of steam photographs are exhausted, and when that melancholy day is reached, both Trains and I will shut up shop.” Based on this, it is doubtful that Beebe would have appreciated the appeal of a book entitled Guide to North American Diesel Locomotives.

Although die-hard steam enthusiasts might pass on this publication, most contemporary train spotters will find this book useful. The third volume in a series of reference works, this publication rounds out the coverage of Kalmbach’s The Historical Guide to North American Railroads and Guide to North American Steam Locomotives. The diesel saga is still unfolding, and this title builds on previous works including the author’s The Model Railroader’s Guide to Diesel Locomotives, published in 2009. This, in turn, was a partial successor to the old Diesel Spotter’s Guide series. Each of these reference books became outdated as subsequent locomotive models were introduced.

With a clean BNSF SD70ACe on the cover, this book appears quite contemporary, and it contains lots of information. In the introduction, Mr. Wilson clarifies the scope of this book. It covers standard gauge; heavy-duty diesel locomotives produced by the major U.S. and Canadian manufacturers, past and present. Not covered are “critters” and narrow-gauge units, straight electrics or turbine units, export models and locomotives with limited production. Exactly what it takes to exceed the “few were built” barrier is not clear; it’s a safe bet that Morrison-Knudsen’s six MK5000Cs would not qualify (although the rebuilt MK50-3 makes the Utah roster) but what about the Siemens SC-44 Charger? Also missing is the shift of production of General Electric locomotives to Fort Worth, Texasm and recent uncertainty regarding the future of the company’s locomotive business.

The introduction page also features a photo of a 100-ton ALCO-GE Ingersoll Rand No. 401 that went to the Long Island Rail Road (LIRR) in 1925 and is “often credited” as the first road diesel-electric locomotive in the USA. This momentarily confused this reviewer, since he recalls that a similar ex-CNJ example resides at the B&O Museum in Baltimore. The clarification comes from the timeline at the end of chapter 1. It indicates that CNJ No. 1000 predates the LIRR example by three months but was used for yard service in the Bronx.

This book serves two purposes. The first four chapters describe diesel locomotive history, mechanics, exterior spotting features and classifications. This part of the book will be useful to folks developing an interest in trains. Subsequent chapters focus on individual manufacturers and include photos and descriptions of each model produced by that company. Finally, the second half of the book consists of locomotive rosters of over 120 historic and contemporary railroads. This portion of the book will provide an invaluable resource to researchers, editors and those trying to identify a locomotive in an old photograph.

The historical chapter is full of useful information. It includes a helpful review of why diesels replaced steam. It also explains how Alco introduced the “road switcher” concept but War Production Board restrictions that favored EMD allowed them to “come from behind” and win the lion’s share of locomotive orders in the 1950s. An illustrated timeline from 2006’s Diesel Victory focuses on the 1925-1960 steam-to-diesel transition era. The overall story arc remains as interesting now as it did four decades ago, although GE replaced EMD as the No. 1 locomotive builder in the 1980s.

Each of the chapters that focus on an individual manufacturer contains a photo and brief description of each model produced, and the number of different models will impress the reader. EMD’s models, for example, require 30 pages while the Fairbanks-Morse production gets four. After the model descriptions are the rosters for railroads past and present. This part of the book is why it belongs in every railfan’s library; it will settle arguments that arise from time to time.

Diesel locomotives have developed a dedicated following in the years since the end of steam, and Kalmbach continues to document them. Editor David P. Morgan, who gave us “all diesel” issues of Trains, responded to Mr. Beebe’s 1963 letter. His comment foreshadowed the existence of this book. Morgan wrote, “Trains foresees neither the desire nor necessity to close up shop this century.”