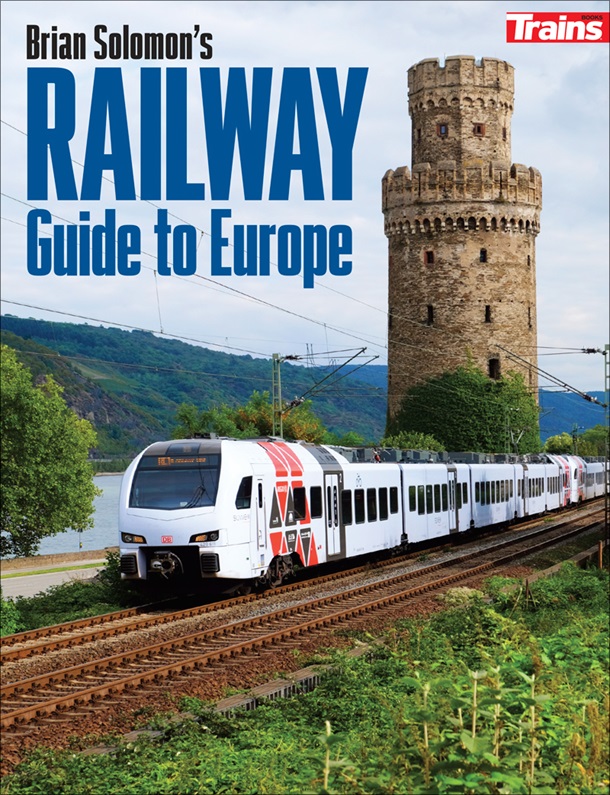 Planning a rail-oriented trip to Europe is challenging, since most travel guidebooks are written for a general audience and don’t necessarily contain specific information that a railfan would like to know. Brian Solomon fills this void with his colorful Railway Guide to Europe, which is being released just in time for the summer travel season. The book is specifically written to assist traveling railfans plan trips to 18 European countries (21 if you count components of Britain separately).

In the preface, Solomon explains that this book “isn’t intended as a comprehensive guide.” This allows him to concentrate on “places that I’ve found to be most interesting and most worthy of revisiting.” This is a key point because it is impossible to cover every point of interest in these 18 countries in a 400-page book. This explains the lack of coverage of Denmark and Poland; Solomon chooses to focus on locations he considers worth visiting given limited time and budget. He does a good job presenting practical travel advice while discussing interesting places, both tourist and railfan, to visit.

Solomon writes that the book is the result of more than 20 years of research, and a review of the photos in this volume confirms that fact. Photography in parts of Europe can be challenging due to weather conditions, and in order to obtain quality images it helps to learn the good photo spots and to be able to return as often as necessary to get the shot. This book contains photos of general tourist attractions interspersed with material more oriented to railfan interest. Some photos skillfully combine tourist and railfan interest. Examples include the cover view of a German regional train passing a medieval tower at Oberwesel, a Paris metro train crossing the Seine, and a Lisboa tram passing the ancient cathedral which was built by Portugal’s first king on the site of an old mosque in 1150. A few vintage photos from the author’s father provide a welcome contrast from contemporary material while serving a reminder that the only constant is change. In general, the quality of illustrations is high and one could justify getting this book just for the photos.

European rail travel has changed significantly since Richard Solomon caught a Trans Europ Express departing Hamburg in 1960. It is disappointing to read about the demise of traditional intercity trains, especially the international overnight sleeper services that were once commonplace on the Continent. This book discusses some of the remaining overnight trains and Solomon reports that France’s SNCF still operates a diminished number of “Intercites” trains pulled by classic French electrics featuring the distinctive inward slanting windshields. These locomotives were also seen in the Netherlands and Portugal. And, in the chapter on Britain, it is nice to see photos of 40-year old High Speed Trains in regular service, albeit in contemporary paint schemes.

In many cases, TGV, ICE, AVE, and Thalys services have replaced classic intercity trains. However, the new high-speed routes are not always the optimal for the traveler more interested in scenery. For example, in the chapter on Germany, considerably more ink is devoted to the lines that parallel the Rhine River than the Koln-Frankfurt high-speed line that serves the premier intercity market. Because much of the passenger traffic has moved to the new line, track capacity for local passenger and some freight trains has opened up on the historic Rhine lines. In addition to places such as Koln, Bonn and Koblenz, scenic riverfront towns like Oberwesel beckon the railfan. One of the Rhine photos shows a Stadler EMU train that looked familiar. It turns out that the same manufacturer will provide EMUs for the Caltrain operation that connects San Jose with San Francisco. Although Flirt cars of Rhine-Main-Verkehrverbahn are single-level, they show a family resemblance to the bilevel cars on order for Caltrain.

Another scenic highlight Solomon identifies is Austria’s Semmering Pass route, built between 1848 and 1852 as part of the Vienna-Trieste “Sudbahn.” There is a good description of this historic line, which is quite scenic and benefited from an early review of US mountain railroading. However, omitted in the sidebar on the Sudbahn’s history is the story that brought the Semmering Pass route to the attention of Trains readers. This, of course, was the July 1961 test of SP 9000, one of the first Krauss-Maffei diesel-hydraulic locomotives built for Southern Pacific and D&RGW. David P. Morgan told the story in the October 1961 issue of Trains.

Many people taking a railway-oriented vacation are, of course, looking for steam or other vintage equipment. Solomon discusses several historic operations and railway museums that are worth a visit, such as the Bluebell, North Yorkshire Moors, Severn Valley and Great Central Railways of England, Ffestiniog in Wales and the Downpatrick & County Down Railway in Ireland. And, of course no visit to Germany would be complete without a ride on a narrow gauge steam train, located in the former East Germany. These are spectacular, for example, the Lossnitz Valley Railway in suburban Dresden crosses a tram (streetcar) line at grade and a lucky photographer can get both types of vehicles in one photograph. Solomon also mentions the well-known Harz Mountain lines, which are located near the former border between East and West Germany. And aficionados of vintage diesel locomotives will not want to miss Portugal’s Museu Nacional Ferroviario, which features a broad-gauge export version of an Alco RS-3.

Brian Solomon delivers a first-rate guide to the modern European rail scene. It is difficult to keep up with all the developments on European railways due to their collective size and complexity. For example, this reviewer was unaware that Switzerland’s Furka Oberalp Bahn (FO) and Brig-Visp-Zermatt-Bahn (BVZ) had merged to form the Matterhorn Gotthard Bahn a few years back. And the final 85 pages, devoted to Finland, Sweden, Norway, Spain, Portugal, the Czech Republic, Slovakia and Hungary, cover countries that are mostly underrepresented in the North American railfan press. (Although Trains ran a good trip report to Spain and Portugal back in the 1980s.) This book fills a void in the available literature on European railways and I can recommend it highly.