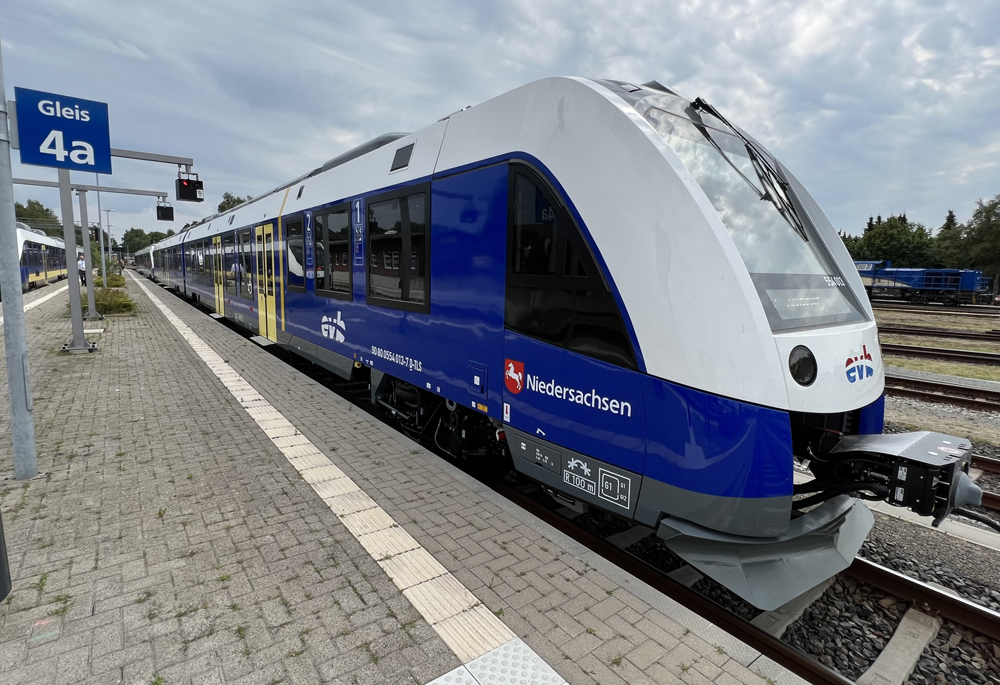 BREMERVORDE, Germany — The world’s first hydrogen-powered trains in regular passenger service are now in operation, having begun service July 25 on a German regional rail line between Cuxhaven and Buxtehude, via Bremervörde. Bremervörde is around 40 miles southwest of the city of Hamburg.

The initial service is being billed as “preliminary,” in case operating adjustments are needed before a reliable service can be officially launched, so older diesel multiple-unit trainsets remain as a backup for the next few months. Once the required level of reliability is achieved, a big public opening ceremony and inauguration by the Governor of the state of Lower Saxony is planned for later this year.

The 14 two-car LINT trains were built by Alstom at its Salzgitter, Germany, shop. They are owned by the state of Lower Saxony and leased to the concession operator Eisenbahn und Verkehrsbetriebe Elbe-Weser (EVB), also owned by the State of Lower Saxony, which operates both passenger and freight train service on its own 150-mile network and elsewhere. The 14 hydrogen-powered trains join a fleet of 40 locomotives and 20 DMUs.

The trains cost $86 million (including a 30-year maintenance contract), part of which has been funded by the German federal government. They are based at the EVB shop in Bremervörde, where a hydrogen fuelling station has been provided. Initially this uses hydrogen supplied by the chemical industry, although plans call for use by 2024 of “green hydrogen.” This will be made by electrolysis of water using power generated by solar panels and wind turbines, both widespread in northern Germany.

The Alstom-designed iLINT train, which uses hydrogen fuel cells and batteries, was introduced in 2016 at the Innotrans trade fair in Berlin [see “Alstom unveils hydrogen-powered train …,” Trains News Wire, Sept. 20, 2016]. Test operation on the EVB line began in 2018, and since then, the two prototype trains have been tested and displayed all over Europe. Each train can operate around 620 miles on a full set of hydrogen cylinders, weighing about 1,600 kilograms (3,530 pounds).  Trial operation has shown that every 2 pounds of hydrogen can replace a gallon of diesel fuel. The hydrogen is used in roof-mounted fuel cells to generate electricity, which is either used directly for traction or stored in onboard batteries. The train recovers energy from braking and stores this in the battery, as well.

Two more hydrogen train fleets are on order in Germany, both also benefitting from federal government subsidies. Twenty-seven more Alstom iLINT trains will enter service on regional routes west of Frankfurt am Main in December this year. These trains will utilize a new hydrogen fueling station built alongside an existing major chemical works at Frankfurt Höchst. A smaller fleet of seven Siemens hydrogen/battery trains, the Mireo Plus-H, are on order for use beginning in 2024 on a commuter rail line currently being rebuilt for passenger use north of Berlin.

No additional orders have followed this initial purchases of hydrogen trains, as large numbers of cheaper battery/EMU trains have instead been ordered from multiple manufacturers for use in Germany. The rail industry there, and around the world, will be looking carefully at the operating economics of the new hydrogen trains in Lower Saxony.